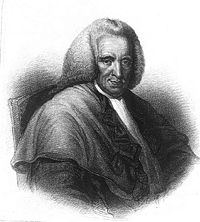 Henry Home, Lord Kames (1696 – December 27, 1782) ( better known as Lord Kames, his title as a Scottish judge of the Courts of Session and Justiciary) was an eighteenth-century lawyer, agriculturalist, and Scottish philosopher. He is recognized for his important contributions to the Scottish Enlightenment, a period from 1730 to 1800 of intense intellectual activity in Scotland which was characterized by practical humanism and a search for solutions to social and economic problems. Lord Kames’ combination of interests in philosophy, science, “belles letters,” history, education and practical improvements of every sort, typified the thinkers of the Scottish Enlightenment. All of his writings and activities were directed towards making improvements to various aspects of Scottish life and thought. He also contributed by using his political influence to procure professorships in Scottish universities for such scholars as Adam Smith, John Millar, and Thomas Reid.

Lord Kames’ Elements of Criticism, 3 vol. (1762), in which he defined beauty in terms of what is naturally pleasant to the senses of sight and hearing, was used as a textbook in rhetoric and literary criticism for a century, in the United States as well as in Britain. In Historical Law Tracts and later in Sketches on the History of Man (1774), Kames set a pattern for modern studies of sociology, anthropology, and history by distinguishing four stages of development of civilization; hunter-gatherers, herders of domestic animals, agricultural society, and a fourth stage of seaports and market towns requiring complex laws and organizational structures, but bringing many benefits to society.

Henry Home was born in Kames, Berwickshire, Scotland in 1696, the son of George Home of Kames. Until the age of 16, he was tutored at home, first by a clergyman, John Wingate, and later by a Mr. Anderson who taught him Greek, Latin, mathematics, and physics. In 1712, he was apprenticed to a Writer to the Signet (high-ranking solicitor), and in 1723 became an advocate, without having had any formal education in law. Home was called to the bar in 1724. Appointed judge in the Scottish Court of Sessions, he was "raised to the bench," thus acquiring the title of Lord Kames in 1752. In 1763, he became Lord of Justiciary. He participated in establishing the Royal Society of Scotland, but didn't live to see its official formation.

Henry received powerful support from his patrons, the Dukes of Argyll, who had long been responsible for government business in Scotland. He was appointed to the highest judicial offices, and became a member of the main government boards who made decisions which affected the Scottish economy. Home was influential in procuring university professorships for Adam Smith, John Millar, and Thomas Reid, but was unsuccessful in the case of David Hume.

Lord Kames was one of the leaders of the Scottish Enlightenment, and during his own lifetime he was widely recognized as a philosopher and sociologist.

Henry Home was married to Agatha Drummond; they had two children, George and Jean Home.

In his final years, "[h]e continued to enjoy those small and select evening parties which usually met at his house, during the winter and summer sessions, without invitation; [...] At these meetings, it was the envied privilege of a few of his younger friends, to find a place; and the graver conversation of a Smith, a Blair, and a Fergusson, was agreeably tempered and enlivened by the native wit, the splendid abilities, and the engaging manners of a [Robert] Cullen; or the sprightly fancy, and whimsical eccentricity of a Boswell." [1]

Henry Home is recognized for his important contributions to the Scottish Enlightenment, a period from 1730 to 1800 of intense intellectual activity in Scotland which was characterized by practical humanism and a search for solutions to social and economic problems. Home had wide-ranging interests and wrote almost 800 dissertations on Scottish law, agriculture, and problems of moral and aesthetic philosophy. He used philosophy as a means of discovering principles which could be used to formulate political and social policies. His writings and his involvements in clubs, government bodies, and economic activities were all intended to bring about improvements to various aspects of Scottish life and thought. Home’s combination of interests in philosophy, science, “belles letters,” history, education and practical improvements of every sort, typified the thinkers of the Scottish Enlightenment.

Home created the first major systematic collections of cases in Scots law, and wrote treatises on a variety of legal antiquities, works on legal history, systematic "institutionist" works, and a philosophical work on equity that is a landmark in the history of this topic. Home wrote a great deal about the importance of property ownership to society. In Essay Upon Several Subjects Concerning British Antiquities, written just after the Jacobite revolt of 1745, he described how the politics of Scotland were not based on loyalty to kings or queens, as the Jacobites had interpreted them, but on royal land grants given in return for loyalty.

Among his other writings were Introduction to the Art of Thinking (1761) and Elements of Criticism (1762). His other works include Essays on the Principles of Morality and Natural Religion (1751), Essays upon Several Subjects in Law (1732), Sketches of the History of Man, 2 vol. (1774), and The Gentleman Farmer (1776).

Home was also on the panel of judges in the Joseph Knight case, which ruled that there could be no slavery in Scotland.

Henry Home is best known for Elements of Criticism, 3 vol. (1762), in which he attempted to define beauty in terms of what is naturally pleasant to the senses of sight and hearing. Elements of Criticism was used as a textbook in rhetoric and literary criticism for a century, in the United States as well as in Britain.

It is wonderful to observe upon what slight foundations nature erects some of her most solid and magnificent works. In appearance at least, what can be more slight than ideal presence? And yet from it is derived that extensive influence which language hath over the heart, an influence which, more than any other means, strengthens the bond of society, and attracts individuals from their private system to perform acts of generosity and benevolence. Matters of fact, it is true, and truth in general, may be inculcated without taking advantage of ideal presence; but without it, the finest speaker or writer would in vain attempt to move any passion. Our sympathy would be confined to objects that are really present, and language would lose entirely its signal power of making us sympathize with the beings removed at the greatest distance of time as well as of place. Nor is the influence of language by means of ideal presence confined to the heart; it reacheth also the understanding and contributes to belief. (Henry Home, and Lord Kames, , in "Emotions Caused by Fiction" in Elements of Criticism,Volume I, 1762)

In Historical Law Tracts and later in Sketches on the History of Man he examined human history and distinguished four distinct stages of development of civilization. During the first stage of hunter-gatherers, people avoided each other out of competition over scarce food supplies. The second stage, in which man became a herder of domestic animals, required the formation of larger societies. In these first two stages, no system of laws was needed, except those given by the head of the family or society. The third stage, agricultural society, required cooperation on a larger scale and new relationships to allow for trade and employment (or slavery). Homes argued that the "intimate union among a multitude of individuals, occasioned by agriculture" required a new set of rights and obligations in society, necessitating laws and law enforcers. A fourth stage of civilization moved from villages and farms to seaports and market towns, where international commerce required more laws and more complexity of organization, but also brought many benefits to society.

The Sketches of the History of Man (1774) was a major synopsis of Scottish Enlightenment philosophical anthropology, and Kames himself referred to it as his magnum opus. The book included essays on Progress of Men as Individuals," "Progress of Men in Society," and Progress of Science, on commerce and government, the female sex, copyright law, the American nations, reason, Aristotle's logic, and morality. Kames and Adam Smith were the leading promulgators of the historical method in jurisprudence and moral philosophy. Kames developed the concept further, implying an essential relationship between history and the other branches of thought.

These studies created a new genre, the story of civilization, and laid down concepts that defined the fields of anthropology and sociology and influenced the modern study of history for 200 years.