Henry George (September 2, 1839 – October 29, 1897) was an American, journalist, reformist, and political economist. Although he had no formal academic training, his economic analyses stimulated reform. His writings, particularly his advocacy of the "single tax" on land, coupled with his public lecture tours, made him quite famous. His most famous work is Progress and Poverty written in 1879; it is a treatise on inequality, the cyclical nature of industrial economies, and possible remedies.

George's motivation was to address the problem of poverty that seemed to accompany economic development, and he approached this both by his theory of taxation, and through his attempts to run for political office, which proved unsuccessful. He inspired the philosophy and economic ideology known as "Georgism," that holds that everyone owns what they create, but that everything found in nature, most importantly land, belongs equally to all of humankind. While George's ideas failed to address all the complexities of human social dynamics, his legacy endures in various organizations, particularly those concerned with environmentalism.

Henry George was born in Philadelphia, Pennsylvania, into a lower-middle-class family. He left school in his mid-teens to be able to travel around the world. In April 1855, at the age of 15, he visited India and Australia. The two countries, especially the life of the people there, left a strong impression that was visible in the formulation of his theories.

After returning home to Philadelphia, he worked for some time as an apprentice typesetter, but eventually decided to move and settle in California. He dreamed of getting rich in the California Gold Rush, but his plans did not work out. Instead, he found a job as a typesetter.

In 1861, he married Australian-born Annie Corsina Fox, and the couple had four children. With two sons born by 1865, the family was in debt and lived in poverty. George accepted a job as a journalist and started to work his way up through the newspaper industry. He worked as a printer, then a writer for the San Francisco Times. After that he became a reporter for the San Francisco Daily Evening Post, finally becoming an editor and proprietor. His articles dealt with the treatment of Chinese immigrants, ownership of the land, and the railroad industry. 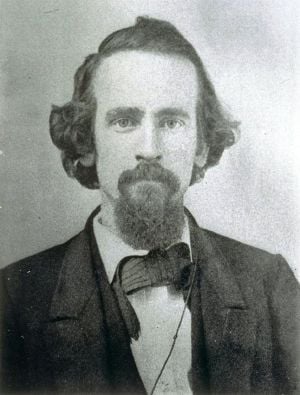 With time, George was able to build a reputation as a journalist, and soon engaged in local politics. He shifted his loyalty from Abraham Lincoln’s Republicans to the Democrats, and became involved with social activism. He criticized the railroad industry and corruption in government. He ran as a Democratic candidate for the state legislature, but failed. He then worked as a state inspector of gas meters.

In 1871, he published a pamphlet, Our Land and Land Policy, in which he presented for the first time his theory of rent as the primary cause of poverty. In 1879, he wrote his masterwork Progress and Poverty, which made him world famous.

In 1880, George and his family moved to New York City, where he spent time writing and lecturing. He became acquainted with the Irish nationalist community, and was invited to Ireland and England by the radical Irish World to study the land problem. He spent one year there, from 1881 to 1882, and formed a friendship with figures such as Michael Davitt and other leaders of the Irish Land League. He also met many English socialists and radicals, such as Henry Mayers Hyndman and Helen Taylor. The visit was a total success, and George received strong support to run for the mayor of New York City in 1886. He ended up second, behind Abram Stevens Hewitt and ahead of Theodore Roosevelt.

In 1897, he was persuaded to run again for the mayor of the New York City, but suffered a stroke and died just four days before the election. An estimated 100,000 people attended his funeral.

Henry George was perplexed by the apparent paradox that the poor in the long-established city of New York lived under much worse conditions than the poor in less-developed California. This paradox supplied the theme and title for his 1879 book Progress and Poverty. George made the argument that a sizeable portion of the wealth created by social and technological advances in a free market economy is captured by land owners and monopolists via rent, and that this concentration of unearned wealth is the root cause of poverty. George considered it a great injustice that private profit was being earned from restricting access to natural resources while productive activity was burdened with heavy taxes, and held that such a system was equivalent to slavery, a concept somewhat similar to wage slavery.

The appropriation of oil royalties by magnates of petroleum-rich countries may be seen as an equivalent form of rent-seeking activity; since natural resources are given freely by nature rather than being products of human labor or entrepreneurship, no single individual should be allowed to acquire unearned revenues by monopolizing their commerce. The same holds true for every other mineral and biological raw resource.

George was in a position to discover this pattern, having experienced poverty himself, knowing many different societies from his travels, and living in California at a time of rapid growth. In particular, he had noticed that the construction of railroads in California was pushing up land values and rents as fast as or faster than wages were rising.

As a result of his observations, Henry George became a strong proponent of a single tax on land, known as the "land value tax," based on the unimproved value of the land, which is the value that the land would have in its natural state. This idea of George's was not new, but based on David Ricardo's theory of rent. George, however, suggested that the tax levied on unimproved land would be sufficient to support all government programs.

Although best known for advocating the replacement of other taxes by "land value taxes," Henry George also formulated a comprehensive set of economic policies. He was highly critical of restrictive patents and copyrights (though he amended his views on the latter when it was explained to him that copyrights do not constrain independent reinvention in the manner of patents). George advocated replacement of patents with government-supported incentives for invention and scientific investigation and dismantling of monopolies when possible—and taxation or regulation of natural monopolies. Overall, he advocated a combination of unfettered free markets and significant social welfare programs made possible by economically efficient taxes on land rent and monopolies.

George also tried to explain the nature of interest and profit. He wrote:

I am inclined to think that if all wealth consisted of such things as planes, and all production was such as that of carpenters—that is to say, if wealth consisted but of the inert matter of the universe, and production of working up this inert matter into different shapes, that interest would be but the robbery of industry, and could not long exist.

George's theory drew its share of critiques. Although both advocated worker's rights, Henry George and Karl Marx were antagonists. Marx saw the Single Tax platform as a step backwards from the transition to communism.

Austrian school economist Eugen von Böhm-Bawerk expressed a negative judgment on George's ideas. Another spirited response came from British biologist Thomas Huxley in his article "Capital - the Mother of Labour," published in 1890 in the journal The Nineteenth Century. Huxley used the principles of energy science to undermine George's theory, arguing that, energetically speaking, labor is unproductive. George's theory of interest is nowadays dismissed even by some otherwise Georgist authors, who see it as mistaken and irrelevant to his ideas about land and free trade.

George intended to propose a tax that would have the least negative impact on productive activity. However, even unimproved land turns out to be affected in value by productive activity in the neighborhood. Thus, his single land tax could function as a disincentive to improvements on a piece of land, if a larger unimproved area of land then increased in value, resulting in a significant tax increase for the owner. Nevertheless, as Milton Friedman commented: "In my opinion, the least bad tax is the property tax on the unimproved value of land, the Henry George argument of many, many years ago."

George’s ideas were taken up to some degree in South Africa, Taiwan, Hong Kong, and Australia—where state governments levy a land value tax, albeit low and with many exemptions. An attempt by the Liberal Government of the day to implement his ideas in 1909 as part of the People's Budget caused a crisis in Britain, which led indirectly to reform of the House of Lords.

In his Freiwirtschaft, Silvio Gesell combined Henry George's ideas about land ownership and rents with his own theory about the money system and interest rates and his successive development of Freigeld. In his last book, Martin Luther King referenced Henry George in support of a guaranteed minimum income. Many other influential people were themselves heavily influenced by George, such as George Bernard Shaw, Leo Tolstoy, and Herbert Simon.

Henry George was also familiar with the work of Karl Marx—and predicted (accurately) that if Marx's ideas were tried, the likely result would be a dictatorship.

Henry George's popularity declined in the twentieth century; however, many Georgist organizations continue to exist and many of his ideas continue to be influential. Environmentalists have resonated with the idea of the earth as the common property of humanity—and some have endorsed the idea of ecological tax reform, including substantial taxes or fees on pollution as a replacement for "command and control" regulation. A follower of George, Lizzie Magie, created a board game called "The Landlord's Game" in 1904 to demonstrate his theories. After further development, this game led to the enduringly popular "Monopoly."

Retrieved from https://www.newworldencyclopedia.org/p/index.php?title=Henry_George&oldid=1064462
Categories:
Hidden category:
This page was last edited on 8 February 2022, at 14:00.
Content is available under Creative Commons Attribution/Share-Alike License; additional terms may apply. See Terms of Use for details.