Emperor Justinian I, who initiated the Second Council of Constantinople, with church, military, and court officials.

The Second Council of Constantinople, also known as the Fifth Ecumenical Council was a meeting of mostly Eastern church leaders convened by Emperor Justinian I from May 5 to June 2, 553. Presided over by Patriarch Eutychius of Constantinople, the council dealt mainly with the emperor's wish to produce a formal condemnation of the allegedly heretical Three Chapters.

Justinian hoped that the public rejection of these supposedly Nestorian writings and their authors would help reconcile the empire's Monophysites with the Council of Chalcedon, which had determined that Christ had "two natures," divine and human, a formula which was seen by many as opening the door to Nestorianism. The council was resisted by Pope Vigilius, who had been brought to Constantinople against his will several years previously, after he refused to condemn the Three Chapters. Vigilius questioned whether the writers in question were truly heretics and feared that their condemnation would weaken Chalcedon and encourage Monophysitism. Vigilius had long resisted the emperor's policy, but after the council concluded, he finally acquiesced, endorsing the its findings and formally condemning the Three Chapters.

The Second Council of Constantinople faced serious opposition in the West even after the endorsement of Vigilius, who died en route back to Rome. Today, it is accepted as a legitimate ecumenical council by the Eastern Orthodox, the Roman Catholics, Old Catholics, and a number of Western Christian groups.

The Second Council of Constantinople was the last phase of the attempt by Emperor Justinian I to ease tensions in the East with the remnants of the Monophysite movement, which was declared heretical at the Council of Chalcedon in 451 over the question of whether Christ had "one nature" (the Monophysite position) or two (the "orthodox" position).

Justinian came to be convinced that the Monophysite branches of Christianity could be reconciled to Chalcedonian orthodoxy if Nestorianism—a more extreme form of two-nature christology than had been expressed at Chalcedon—were more overtly condemned. The targets of this strategy were all long dead: Theodore of Mopsuestia (d. 428), Theodoret of Cyrrus (d. 457), and Ibas of Edessa (d. 457). However, the writings of Theodore and Theodoret were highly regarded by many in the Chalcedonian party, even though each of them had written at certain points in their career in such a way that they could be accused of sympathy with Nestorianism.

The pope, the emperor, and the council

At the end of 543 or the beginning of 544, Justinian issued an edict in which the supposedly Nestorian Three Chapters were officially condemned. His aim was to encourage the Miaphysites—the more moderate faction of those Christians who insisted on "one nature" in Christ—to accept the decisions of the Council of Chalcedon and thus end the strife that had long plagued the empire over this issue.

The major leaders of Eastern Christianity cooperated with the imperial policy. Many in the West, however, balked, considering the condemnation unnecessary, since Nestorianism had already been expressly condemned at the First Council of Ephesus. Moreover, remembering the failed Henotikon of Emperor Zeno—which also tried to reconcile the Monophysites—they feared that this new imperial meddling in church affairs would detract from the importance of the Council of Chalcedon and weaken the position of Rome. Pope Vigilius thus refused to endorse the imperial edict denouncing the Three Chapters and was called to Constantinople by Justinian in order to settle the matter there with a synod. 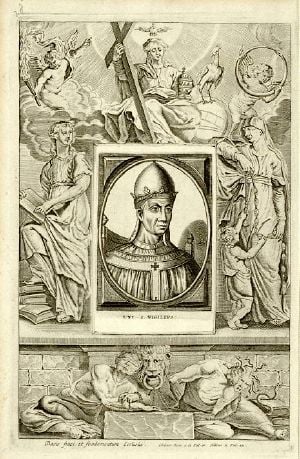 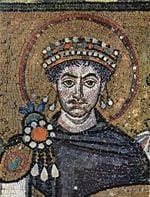 He did not go willingly, however. Taken by imperial agents to a ship, he left Rome in November 545, but did not reach Constantinople until late 546 or early 547. Still refusing to agree to the condemnation of the Three Chapters, Vigilius was kept in Constantinople against his will for eight years, sometimes under extreme pressure.

In 553, the new patriarch of Constantinople, Eutychius, presented his profession of faith to Vigilius and, in union with other Eastern bishops, urged the calling of a general council. At this point Vigilius was willing to convoke such a meeting, but insisted that it be held either on the Italian peninsula or Sicily, in order to secure the attendance of bishops from the West. Justinian would not agree to this and instead proposed a commission composed up of delegates from each of the major patriarchates. Not wishing to be outnumbered, Vigilius proposed that an equal number be chosen from the East and the West. At this point, negotiations broke down, and the emperor convoked the council without the pope's cooperation. Under these conditions, Vigilius refused to attend the gathering.

In the meantime, Vigilius had sent to the emperor (May 14) a document known as his first Constitutum, signed by himself and 16 mostly Western bishops. The document condemned numerous supposedly heretical propositions of Theodore of Mopsuestia. However, the pope refused to condemn Theodore personally, as the Three Chapters edict had done. Moreover, since Chalcedon had specifically restored Theodoret and Ibas to their episcopal chairs after Nestorius had been condemned, the pope refused to condemn either their writings or their persons.

The council thus convened under Eutychius' presidency, but without significant western participation. In condemning the Three Chapters, the council stated:

Having thus detailed all that has been done by us, we again confess that we receive the four holy Synods, that is, the Nicene, the Constantinopolitan, the first of Ephesus, and that of Chalcedon, and we have taught, and do teach all that they defined respecting the one faith. And we account those who do not receive these things alien from the Catholic Church. Moreover we condemn and anathematize, together with all the other heretics who have been condemned and anathematized by the before-mentioned four holy Synods, and by the holy Catholic and Apostolic Church, Theodore who was Bishop of Mopsuestia, and his impious writings, and also those things which Theodoret impiously wrote against the right faith, and against the Twelve Chapters of the holy Cyril, and against the first Synod of Ephesus, and also those which he wrote in defense of Theodore and Nestorius. In addition to these we also anathematize the impious Epistle which Ibas is said to have written to Maris, the Persian….

The council also set forth its own eleven "chapters:"

In the seventh session of the council Justinian caused the name of Vigilius to be stricken from the diptychs. While Vigilius remained uncooperative for the present, the decisions of the council were quickly enforced throughout the East, and those who refused to endorse the council were removed from their posts and banished. The hoped-for reconciliation of the Monophysites and Chalcedonians, however, did not follow.

When the Roman clergy and civil leaders requested the emperor to permit Vigilius to return to Rome, Justinian agreed to do so only on condition that the pope would accept the decisions of the council. Vigilius finally bowed to the emperor's wishes in a letter of December 8, 553, to the Patriarch Eutychius accepting the decisions of the council, which he had so long opposed. He followed this with his specific condemnation of the Three Chapters in a second "constitution" of February 26, 554.

At the end of a sorrowful residence of eight years at Constantinople, the pope was finally allowed to start his return to Rome in the spring of 555. While on the journey, he died at Syracuse in Sicily.

Despite the additional recognition of Pope Pelagius I (555-60), the Fifth Ecumenical Council only gradually acquired acceptance in the West. In Northern Italy the ecclesiastical provinces of Milan and Aquileia, believing that the papacy had become a tool of the eastern emperor, broke off communion with Rome. This schism would last for several decades around Milan, and for more than a century in Aquileia.

The original Greek acts of the council are lost, but there exists an old Latin version, probably contemporary and made for the use of Vigilius, which was quoted by his successor Pelagius I. Some of its chapters, however, seem to have been tampered with by a later editor.