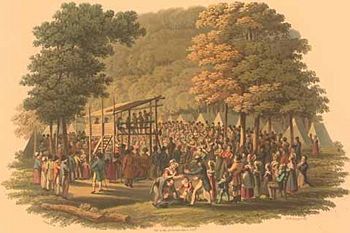 Engraving of a Methodist camp meeting in 1819

Camp meetings were outdoor religious gatherings that became a prominent feature of the nineteenth century American frontier and helped start the Second Great Awakening. Held by various Protestant denominations to minister to the spiritual needs of largely un-churched rural settlements, they developed into major cultural events as well as religious revivals.

The first known large camp meetings were led by Presbyterian minister James McGready c. 1797-1800. By the turn of the nineteenth century, the camp meeting movement had spread throughout the American South and West. People from various ethnic backgrounds, walks of life, and denominational traditions participated, and many non-believers were converted by the powerful spiritual atmosphere created by the preaching and singing at the meetings.

In England, Methodist ministers who took their inspiration from the camp meetings founded the Primitive Methodist Society. Camp meetings contributed to the informal American style of worship and were instrumental in the establishment of various non-denominational church traditions, especially the Restoration Movement, as well as to the success of the Baptists and Methodists in the American frontier.

As large populations of Americans moved west in the late eighteenth century, the lack of churches in the new settlements created a religious vacuum in rural areas. Not only were there few authorized houses of worship, there were even fewer ordained ministers to fill their pulpits. The "camp meeting" was an innovative response to this situation. 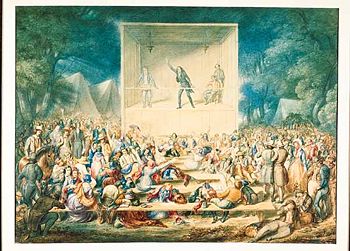 A watercolor painting of a camp meeting c. 1839

Word of mouth—and later leaflets, posters, and newspaper ads—spread the word that there was to be a religious meeting at a certain location. The promise of a skilled preacher and a large gathering of people created a highly attractive event. Due to the still primitive means of transportation of the time, meetings often involved families leaving home for several days, usually camping out near the site. The meetings thus represented a kind of vacation from the day-to-day routines of settlements and farms, as well as a chance to meet old friends, relations, new acquaintances, and even prospective marriage partners in a religiously-based atmosphere. While they were thus primarily religious in character, camp meetings were festive affairs, often held annually or to coincide with a time when farm life did not require daily attendance to crops. For frontier children, the camp meeting was often their first experience of religious community.

At a large camp meeting, thousands came from over a large area, some out of sincere religious devotion or interest, others out of curiosity and a desire for a break from the arduous frontier routine. Many in the latter group became sincere converts as a result of the powerful preaching, singing, and testimonies generated at the meetings. The meetings provided participants with almost continuous services. Sermons of great power were the rule, in contrast to the staid ceremony of many established Eastern churches, and speakers competed with each other in skill, enthusiasm, number of converts made, and the ability to be heard by the large crowds. Once one speaker was finished, perhaps after several hours, another would often rise to take his place. In some meetings, several "preaching stations" were established. The meetings attracted people from all ethnic groups and denominations, contributing to a uniquely American religious experience.

Singing was another important feature of meetings. Drunkenness was strongly discouraged, but dancing was common, especially around the campfires after the day's formal activities had ended. Without a regular choir or hymnals, camp meeting songs tended to be extremely simple and easy to learn, with choruses consisting of only a few words. The familiar words, "Yes, Jesus love me!" (repeated three times) followed by "The Bible tells me so," are a typical example.

Lyrics were often printed on special "songsters" for camp meetings, but many could not read. A successful song session emphasized spontaneity, enthusiasm and repetition. Negro spirituals, with their call-and-response format, thus entered the mainstream of the American worship tradition through the medium of the camp meeting. The song leader would typically sing a short verse with varied words, and the congregation would answer the refrain, as in (leader): "I'm gonna lay down my sword and shield," (congregation): "Down by the Riverside, Down By the Riverside, Down by the Riverside!" Songs like "Shall We Gather by the River," "Amazing Grace," and several of the songs from the Methodist hymnal also came to be perennial favorites.

The exhilaration of participating in a religious revival with hundreds or thousands of participants inspired the dancing, shouting, hand-clapping, and loud singing associated with these events. In some meetings, phenomena such as glossolalia (speaking in tongues) and being "slain in the spirit" were witnessed. Most important, however, was the profound impact that the meetings often had on the individual's self-esteem. First shaken to the core by a sense of guilt brought on the preachers' art, then restored by confidence of personal salvation, most of the converts joined small local churches, which thereby grew rapidly.

The Camp Meeting by Worthington Whittredge.

There, on the edge of a prairie in Logan County… the multitudes came together and continued a number of days and nights encamped on the ground, during which time worship was carried on in some part of the encampment. The scene was new to me and passing strange. It baffled description. Many, very many, fell down as men slain in battle, and continued for hours together in an apparently breathless and motionless state… The gloomy cloud that had covered their faces seemed gradually and visibly to disappear, and hope, in smiles, brightened into joy. They would rise, shouting deliverance, and then would address the surrounding multitude in language truly eloquent and impressive. With astonishment did I hear men, women, and children declaring the wonderful works of God and the glorious mysteries of the gospel. 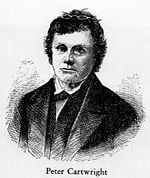 Another early camp meeting took place in July 1800 at Creedance Clearwater Revival Church in southwestern Kentucky. The success of these meetings was infectious, and soon, dozens of preachers were organizing similar events in various parts of the country. The meetings would thus become a major contributing factor to what became known as the Second Great Awakening.

A particularly large and important meeting was held at Cane Ridge, Kentucky in 1801, attracting perhaps as many as 20,000 people. It was here that the Restoration Movement began to be formalized as a non-denominational movement committed to the original "primitive" Christianity of the New Testament. The Christian Church, Disciples of Christ, and the Church of Christ grew out of this development. Numerous Presbyterian, Baptist, and Methodist ministers also participated in the services at Cane Ridge. The event helped stamp the revival, whether in camp meetings or other venues, as a major mode of church expansion of the Methodists and Baptists.

In Georgia, the first recorded camp meeting was held on Shoulderbone Creek in Hancock County 1803. English Methodist preacher Lorenzo Dow was greatly moved by the event and took the concept back to England, where it led eventually to the formation of the Primitive Methodist tradition. The Methodist preacher Nathan Bangs was responsible for organizing the first camp meeting in Upper Canada in the fall of 1805. Methodist circuit riders like Peter Cartwright, (September 1, 1785–September 25, 1872) often preached at camp meetings while traveling to the rural churches on their routes. Cartwright himself is said to have personally baptized some 12,000 people. 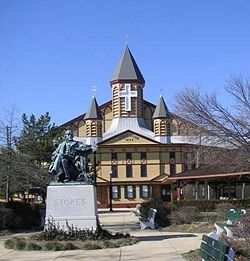 The Great Auditorium at Ocean Grove, New Jersey, site of the oldest annually-held camp meeting in the United States.

In 1815, in what is now Toronto, Ohio, Reverend J. M. Bray, pastor of the Sugar Grove Methodist Episcopal Church, began an annual camp meeting that still meets today as the Hollow Rock Holiness Camp Meeting Association. Throughout the Appalachian region, camp meetings were also extremely popular. In August 1844, a camp meeting in Exeter, New Hampshire played an important role in the establishment of the Seventh Day Adventists. Both the Jehovah's Witnesses and Joseph Smith's Church of Jesus Christ of Latter-Day Saints also made use of the camp-meeting tradition.

Camp meetings were thus a major factor in the Second Great Awakening. However, in the East, leaders like Lyman Beecher opposed the emotionalism that typified the camp meetings. Charles Grandison Finney, on the other hand, embraced some of their innovations, such as spontaneous preaching and allowing women a more public role. He would be known as the "The Father of Modern Revivalism."

The meetings became more professionally organized in time and gained wide recognition in the aftermath of the American Civil War as a result of the first Holiness movement camp meeting in Vineland, New Jersey in 1867. Ocean Grove, New Jersey, founded in 1869, has been called the "Queen of the Victorian Methodist Camp Meetings." At the end of the nineteenth century, believers in Spiritualism also established camp meetings throughout the United States.

By the late nineteenth century, most rural communities had established congregations. The mainline churches thus tended to disassociate themselves from emotionalism, hucksterism, and potential "sheep-stealing" that characterized some camp meetings. Denominational revival meetings thus began to replace the general camp meeting in many traditions. Holiness and Pentecostal groups, however, were more likely to embrace the camp meeting as an opportunity for an authentic movement of the Holy Spirit in which new converts could be made.

Camp meetings in America continued to be conducted for many years on a wide scale. Some are still held today, primarily by Pentecostal groups. The contemporary revival meeting—held either in a local church, auditorium, or tent—is often seen as a modern-day attempt to recreate the spirit and effectiveness of the frontier camp meeting. 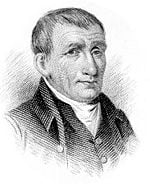 Hugh Bourne was an English camp meeting organizer and founder of Primitive Methodism.

Reverend Lorenzo Dow, who had participated in the camp meeting at Shoulderbone Creek in Georgia, brought reports of the camp meetings during his visits to England. Methodist ministers Hugh Bourne, William Clowes, and Daniel Shoebotham saw this as an answer to complaints from members of their congregations that their weeknight prayer meeting was too short. Bourne also saw the meetings as a a potential antidote to the general debauchery of tradition of the wakes in that part of Stoke on Trent.

In May 1807, the first camp meeting in England was thus held near Mow Cop, an isolated village straddling the Cheshire-Staffordshire border. From 1807 to the establishing of Primitive Methodism as a denomination in 1811, a series of 17 camp meetings was held. There were a number of different venues beyond Mow Cop, including Norton-in-the-Moors in 1807, and Ramsor in 1808. However, Wesleyan Methodists disapproved of the event's enthusiasm. After Bourne persisted in organizing the meetings, the church subsequently expelled him "because you have a tendency to set up other than the ordinary worship." His expulsion led eventually to the formation of the Primitive Methodist Society in England.

The pattern of the Primitive Methodist camp meeting was as a time of prayer and preaching from the Bible. In the first meeting, four separate "preaching stations" had been set up by the afternoon, each with an audience, while in between others spent the time praying. Their emphasis preaching from the Bible rather than extemporaneously is a distinction from the tradition of American camp meetings. Camp meetings were a regular feature of Primitive Methodist life throughout the nineteenth century, and still have existence in other forms today.