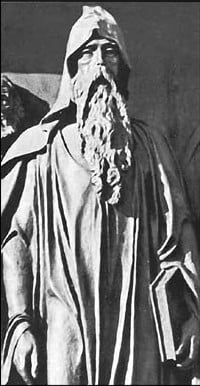 Nestorius, in Greek, Νεστόριος (c. 386 – c. 451 C.E.) was archbishop of Constantinople from April 10, 428 to June 22, 431. He is considered the originator of the Christological heresy known as Nestorianism, which emerged when he began preaching against the title Theotokos (in Greek, Θεοτόκος) or Mother of God, beginning to be used of the Virgin Mary. He distinguished between the logos (“divine nature”) and Christ (the Son, the Lord) as a union of divine nature and human nature. He refused to attribute the human acts and the sufferings of Jesus to the divine nature, arguing that God could not suffer on the cross, as God is omnipotent.

His political rival, Cyril, bishop of Alexandria, used the Christological debate to induce Pope Celestine I to condemn the teachings of Nestorius, and to have him declared a heretic and deposed at the Council of Ephesus in 431. In 435 an edict by his former patron, Emperor Theodosius II, exiled Nestorius to a monastery in the Great Oasis of Hibis and ordered the burning of all his writings. Nestorius spent the last years of his life in Egypt. The theological conflict led to a split within the church and to the creation of separate Nestorian churches that flourished in the Middle East and central Asia.

Nestorius was born at Germanicia, in Syria Euphoratensis (present day Maras in southern Turkey), 31 years after Theodore of Mopsuestia, around 381. He was a pupil of Theodore of Mopsuestia in Antioch, Syria, and was living as a priest and monk in the monastery of Euprepius near the walls of Antioch when he was chosen by the Emperor Theodosius II to succeed Archbishop Sisinnius I of Constantinople (died 428) as Patriarch of Constantinople. Nestorius had a reputation for asceticism, orthodoxy and the eloquence of his sermons; and the popularity of the memory of St. John Chrysostom of Antioch (Patriarch 398-404) among the people of Constantinople may have influenced the emperor to choose another bishop from Antioch. He was consecrated in April 428.

The Patriarchate of Constantinople was a position of great honor but it required political astuteness (John Chrysostom was harried out of office twice in his six year term as Patriarch, and died the second time at the hands of those who exiled him). Emperor Constantine I (272-337), in a desperate attempt to save the Roman Empire, had moved the capital to Constantinople. The strained relations between the Eastern Roman Empire, centered in Constantinople, and the Western Roman Empire, centered in Rome, were reflected within the church through theological differences (in the east, the Apocalypse of Daniel was interpreted as the establishment of a millennial kingdom with Constantinople as its capital), the establishment of rival apostolic lines of succession, and the development of the concept of primacy. Nestorius’ rival, Cyril, Patriarch of Alexandria from 412 to 444, was having difficulty controlling the Antiochene community in Egypt, and employed the strategy of discrediting Nestorius, the Patriarch of Constantinople, as a heretic in order to enlist the support of the Roman Church against him.

At the beginning of his term in Constantinople, Nestorius had promised Emperor Theodosius II that he would "free (the land) of heretics and I will give you heaven in return; help me to destroy the heretics and I will help you destroy the Persians." He immediately sought to strengthen the laws against heretics, adding new penalties against the Novatians and Quarterdecimans in Asia, Lydia and Caria. He antagonized Memnon, bishop of Ephesus, by pursuing heretics into Ephesian ecclesiastical districts; the church in Ephesus at that time had lost financial support because of the importance of the church in Constantinople.

At the end of 428, or in the early part of 429, Nestorius preached the first of his famous sermons against the use of the word Theotokos (Mother of God) in reference to Mary, claiming that “Mother of Christ” was appropriate instead, and detailing his Antiochian doctrine of the Incarnation. The first to criticize it were Eusebius (later Bishop of Dorylaeum and the accuser of Eutyches), and two priests, Philip and Proclus, who had both been unsuccessful candidates for the patriarchate. At a synod convened in Alexandria in August of 430, Cyril advised Pope Celestine I to condemn the teachings of Nestorius. Cyril sent to Rome his correspondence with Nestorius, a collection of Nestorius’ sermons, and a newly-composed work of his own, the five books of "Contra Nestorium." They were translated into Latin, and the pope assembled the customary council, gave a general condemnation of Nestoris, and called for him to recant within ten days. Nestorius had already arranged with Emperor Theodosius II to assemble a council; he rushed to issue to summons before the condemnation of Pope Celestine I arrived on December 6, 430.

The general church council was held at Ephesus, a special seat for the veneration of Mary, where the theotokos formula was popular. The emperor gave his support to the archbishop of Constantinople, while Pope Celestine I was in agreement with Cyril. Cyril took charge of the Council of Ephesus (431), opening debate before the long-overdue contingent from Antioch could arrive. Nestorius himself refused to attend because he did not consider the council to be officially complete without the presence of the bishops from Antioch. The council deposed Nestorius and declared him a heretic. In Nestorius' own words:

When the followers of Cyril saw the vehemence of the emperor… they roused up a disturbance and discord among the people with an outcry, as though the emperor were opposed to God; they rose up against the nobles and the chiefs who acquiesced not in what had been done by them and they were running hither and thither. And… they took with them those who had been separated and removed from the monasteries by reason of their lives and their strange manners and had for this reason been expelled, and all who were of heretical sects and were possessed with fanaticism and with hatred against me. And one passion was in them all, Jews and pagans and all the sects, and they were busying themselves that they should accept without examination the things which were done without examination against me; and at the same time all of them, even those that had participated with me at table and in prayer and in thought, were agreed… against me and vowing vows one with another against me… In nothing were they divided.

In the following months, 17 bishops who supported Nestorius's doctrine were removed from their sees, and his principal supporter, John I, Patriarch of Antioch, succumbed to imperial pressure around March 433 and abandoned Nestorius. Eventually, Emperor Theodosius II, who had supported Nestorius, bowed to the influence of his sister Pulcheria to issue an imperial edict (August 3, 435) that condemned all his writings to be burned, and exiled Nestorius to a monastery in the Great Oasis of Hibis (al-Khargah), in Egypt, securely within the diocese of Cyril.

Following deportation to the Great Oasis (435-439), Nestorius spent some time in Panopolis under the guardianship of Shenoute, who had attended the Council of Ephesus as the chief bodyguard of Cyril. Once he was carried off by the Nubians (not the Blemmyes) in a raid, he was restored to the Thebaid with his hand and one rib broken. He gave himself up to the governor in order not to be accused of having fled. Nestorius died shortly after the Council of Chalcedon in 451, in Thebaid, Egypt.

The writings of Nestorius were numerous, but because they were burned wherever they could be found, surviving fragments are mainly in Syriac or embedded in the works of his opponents. Though some of Cyril’s criticisms misrepresent the teachings of Nestorius, the twelve anathematisms he drew up for the recantation of Nestorius gave a fairly accurate representation of Nestorius's views. Nestorius did not disown these propositions.

Nestorius was influenced by Stoic philosophy and by Cappadocian theology. He never considered Christ simply as a man, but made a precise distinction between divine nature (ousia) and person (hypostasis). He distinguished between the logos (“divine nature”), and Christ (the Son, the Lord) as a union of divine nature and human nature. He refused to attribute the human acts and the sufferings of Jesus to the divine nature, arguing that God could not suffer on the cross, as God is omnipotent. Therefore, the human part of Christ died on the cross, but not the divine. He preached against the use of the title “Mother of God” (Theotokos) for the Virgin Mary and would only call her "Mother of Christ" (Christotokos). In his sermons, he is said to have argued that "the creature hath not given birth to the uncreatable," "the Word came forth, but was not born of her," and "I do not say God is two or three months old." In place of Theotokos, Nestorius suggested the use of the term Christotokos ("Christ - bearing").

Cyril, who opposed his views, argued that Nestorius was actually denying the reality of the Incarnation by making Jesus Christ into two different persons (one human, one divine) sharing one body.

After 1,500 years of being stigmatized as a heretic, a book written by Nestorius, the Bazaar of Heracleides, was discovered in 1895, written towards the end of his life, in which he explicitly denies the heresy for which he was condemned, instead, affirming of Christ "the same one is twofold," an expression that some consider similar to the formulation of the Council of Chalcedon. Nestorius's earlier surviving writings, however, including his letter written in response to Cyril's charges against him, contain material that seems to support charges that he held that Christ had two personhoods. The question of whether Nestorius was actually a Nestorian is still a matter of debate.