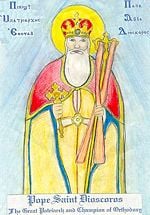 Eutyches (c. 380 – c. 456) was a Byzantine presbyter and archimandrite (monastic leader) often seen as the instigator of the Monophysite heresy. He was a key figure of the Second Council of Ephesus, where he was exonerated, but was later condemned at the Council of Chalcedon.

The head of an influential monastery near Constantinople, Eutyches first came to notice in 431 at the Council of Ephesus for his vehement opposition to the teachings of Nestorius, who had taught that Christ was composed of two distinct natures: divine and human. After returning to Constantinople, Eutyches continued to criticize the former supporters of Nestorius, including some who had now accepted the Council of Ephesus and made peace with its leader, Cyril of Alexandria. His own insistence on only "one nature" in Christ soon made him vulnerable to charges of heresy, however, and he was condemned at a local church synod in Constantinople in 448.

Eutyches found support for his cause in the patriarch of Alexandria, Dioscorus, but Pope Leo I wrote that he had erred by insisting on "one nature" in Christ. This led to the Second Council of Ephesus under Dioscorus' leadership, at which Eutyches was exonerated and his accusers deposed. However, the pope's views were not considered, and accusations of gross misconduct were leveled against Dioscorus by Eutyches' opponents.

A major schism now developed, with the venerable "popes" of Rome and Alexandria excommunicating each other as heretics. The death of Emperor Theodosius II in 450 led to the Council of Chalcedon, which deposed both Eutyches and Dioscorus for Monophysitism and published what is now considered the final word on christology, affirming "two natures" in Christ "without division."

Euthyches soon died in exile, but the Monophysite controversy would continue to plague the eastern and African churches for at least another century.

During the reign of Emperor Theodosius II, Patriarch Nestorius of Constantinople, had faced opposition from his rival, Cyril of Alexandria, for asserting that Mary ought not to be referred to as the "Mother of God" (theotokos in Greek, literally "God-bearer") and was consequently denounced as a heretic.

According to Nestorius, Jesus' divinity should be regarded as distinct from his humanity. God could not be a helpless infant, nor was it God who died on the Cross. Cyril, supported by Pope Celestine I, opposed this view successfully at the Council of Ephesus in 431. There, Eutyches became Cyril's adamant supporter and continued to speak out in opposition to Nestorianism throughout his career.

A monk following the Alexandrian school of theology, Eutyches had been the head of an major monastery outside of Constantinople well before his appearance at Ephesus. He was highly respected and had influence at the imperial court of Theodosius II through the powerful eunuch Chrysaphius, to whom he had stood godfather.

Eutyches became an outspoken opponent of the Antiochan party led by Theodoret of Cyrrhus and John of Antioch. Although these bishops, who had once championed the orthodoxy of Nestorius, eventually submitted to the Council of Ephesus and had made peace with Cyril of Alexandria, in 444 new hostilities broke out between Cyril's successor Dioscorus of Alexandria and the Syrian fathers.

At Constantinople, Eutyches denounced the supposed revival of Nestorianism. He wrote to Pope Leo I on the subject and received a sympathetic reply. Patriarch Domnus of Antioch countered this by addressing a letter to Theodosius II, accusing Eutychius himself of renewing the heresy of Apollinarius, which had allegedly blurred the distinction between God the Father and God the Son.

At a church council presided over by Patriarch Flavian of Constantinople in that city in 448, Eutyches was accused of heresy by Domnus of Antioch and Eusebius, bishop of Dorylaeum. After several delays and political maneuvers, Eutyches finally agreed to appear at the council and was asked by Flavian: "Do you acknowledge two natures, Lord Archimandrite, after the Incarnation, and do you say that Christ is consubstantial with us according to the flesh; yes or no?"

Eutyches at first declined to give a direct answer. He finally agreed to the phrase "consubstantial with us," although he claimed that it constituted a novelty to him. However, on the issue of "two natures," he said: "I confess that our Lord was of two natures before the union; but after the union, I acknowledge one nature." After pressing him to acknowledge two natures after the Incarnation and showing him proofs from the writings of such authorities as Athanasius and Cyril of Alexandria, the synod finally declared Eutyches to be condemned of heresy and deposed him as archimandrate.

The issue soon became highly publicized in Constantinople. From Rome, Pope Leo I read the acts of the council and concluded that although Eutyches' views were indeed heretical, he was a simple old man who had erred through ignorance and might be restored if he repented. However Patriarch Dioscorus, following his Alexandrian predecessors in asserting their primacy over Constantinople, annulled the sentence of Flavian and absolved Eutyches of heresy.

Through his contacts at the court of Theodosius, Euthyches was able to obtain a new synod of 32 bishops which met in April 449 in Constantinople without the presence of Flavian, in order to examine Euthyces' complaint that the acts of the earlier synod had been falsified. After a careful revision of them, some slight alterations were made, but the result was of no practical importance to his cause.

In the meantime, Dioscurus and Eutyches obtained the emperor's support for an ecumenical council to meet at Ephesus on August 1. The council of 130 bishops was dominated by Dioscorus, who succeeded in stacking the synod with Egyptian bishops and other supporters of the Alexandrian school, while taking advantage of a delay in the appearance of a large Antiochan delegation to begin the proceedings without them. Dioscorus went so far as to refuse to allow the council to hear the dogmatic letter of Pope Leo I, which the pope had expected his legates to share with the bishops. Opposition to Dioscorus' tactics was allegedly met by intimidation and violence.

While a rival council now met under the presidency John of Antioch, Eutyches was acquitted and reinstated. Flavian of Constantinople and his key supporters were deposed and imprisoned. The death of Flavian, which soon followed, was attributed to beatings he received at the hands of Eutyches' impassioned supporters.

The pope soon annulled the decrees of this council, but Theodosius II endorsed it. Eutyches' returned in triumph to his monastery, while a disciple of Dioscorus was appointed to succeed Flavian in Constantinople. Dioscorus and Leo excommunicated each other, and Leo refused to recognize the legitimacy of Flavian's successor as patriarch of Constantinople. The so-called Monophysite controversy, referring to the idea of "one nature" in Christ, had now erupted into an empire-wide schism.

The outlook changed, however, after Theodosius' sudden death in 450. The new emperor, Marcian, desired reconciliation with Rome and was a supporter of Leo's view. A new council met at Chalcedon in October 451, the course of which was directed by imperial commissioners under the presidency of a papal legate. Dioscurus and Eutyches were both deposed and exiled, and the decrees of the Second Council of Ephesus were declared null and void. The Council of Chalcedon would go down in history as the Fourth Ecumenical Council, while II Ephesus lives in infamy as a "Robber Synod."

A letter of Leo I written on April 15, 454, however, complains that Eutyches was still spreading his "heresy" in banishment and begs Marcian to transfer him to some more distant and lonely spot. The old man does not seem to have long survived after this. His monastery at Constantinople, meanwhile, was put under the supervision of a papal legate.

Euthyches is often considered the founder of Monophysitism, although the doctrine of "one nature" in Christ more generally belongs to a trend in the Alexandrian school of christology than to Eutyches himself. After his death, the "one nature" doctrine made considerable progress in Syria and continued to have substantial strength in Egypt. It also found sympathizers in Constantinople, where several emperors sought to find a way to reconcile it with the Chalcedonian formula, almost always failing badly in the attempt and opening new schisms between East and West. Monophysitism, whether of the Eutychian or other varieties, continued to be a divisive issue in the Christian Roman Empire well into the sixth century and may also be seen as contributing to the seventh-century Monothelitism controversy as well.

In the sixth century, they monk and bishop Jacob Baradaeus united various Eutychians or Monophysites into one church, which exists today under the name of the Syriac Orthodox Church. Earlier, Patriarch Dioscorus of Alexandria had condemned Eutychianism while continuing to refuse to accept the Council of Chalcedon as orthodox. Today's Oriental Orthodoxy honors Dioscorus as a major saint but rejects the label of Monophysite, which it associates with Eutyches but not Dioscorus.