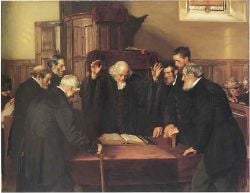 The Ordination of Elders in a Scottish Kirk by John Henry Lorimer, 1891

Presbyter is a term derived from the Greek word presbyteros, meaning "elder." It has become the basis both for the Catholic "priest," to which it is etymologically related, and the idea of a governing board of elders in other churches, especially the Presbyterian Church. In modern usage, it can be synonymous with priest, pastor, elder, or minister in various Christian denominations.

In the early Pauline Christian churches, the basic form of church governance seems to have involved three spiritually-inspired offices: apostles, prophets, and teachers. The Jerusalem church, on the other hand, had a more definite administrative structure, consisting of elders, apostles, and deacons. The later letters attributed to Paul of Tarsus and other New Testament writers also refer to presbyters as elder members who had authority, either singly or collectively, over the local church and its members.

While the term presbyter and episcopos (overseer or bishop) originally may have described the same persons, in the second and third centuries the office of presbyter became more distinct from that of bishop, with the latter assuming the higher position of authority in the local church. By the beginning of the third century and perhaps earlier, presbyters had the right to act as sacramental ministers if so authorized by the bishop, administering baptism and celebrating communion.

Later, presbyters developed the more complete "priestly" functions similar to the concept of the Catholic or Orthodox priests, although they still lacked pastoral authority over their own churches. Once the Christian movement grew to the point where several churches might exist in one city or diocese, the presbyter came to have charge of his own church under the bishop's oversight.

In the modern era, Protestant churches rejected the episcopal (bishop-centered) form of church governance and returned to what was considered the more ancient presbyterian model, in which a board of elders governs the church, rather than a single bishop.

Since the word "presbyter" came to be synonymous with the idea of a priest, it is important to understand at the outset, that the sacerdotal function—including leading prayer, offering of sacrifices, and the conducting of other sacred rituals—was originally described by terms like sacerdos in Latin, iereus in Greek, kohen in Hebrew. When the word "priest" appears in the New Testament, the usual word for it in Greek is iereus, and not presbyteros. Only considerably later, when presbyters took on the role of sacerdos/iereus, did the term presbyter evolve into "priest" as we use the word today. Etymologically, however, priest and presbyter are closely connected.

Elders in the earliest church

The earliest organization of the Christian Churches in Judea was similar to that of Jewish synagogues, who were governed by a council of elders (presbyteroi). In Acts 11:30 and 15:22, we see this collegiate system of government in Jerusalem, in which "apostles and elders" receive the monetary gift of Barnabas and Paul. In Acts 14:23, Paul and Barnabas ordain elders in the churches which they had founded and place the churches in their trust. Acts 15:2 describes a "sharp dispute" in the church of Antioch over the question of the circumcision of Gentile believers, with Paul and Barnabas appointed to head a delegation to Jerusalem to "see the apostles and elders about this question."

Many modern commentators believe that these presbyters may have been identical to the "overseers" (episkopoi, i.e., bishops) referred to elsewhere, and cite such passages as Acts 20:17, Titus 1:5,7, and 1 Peter 5:1 to support this claim. In this view, the office of bishop only gradually became distinguished from that of presbyter, with the leading bishop alone having the function of "oversight." Others point out that Acts 15 describes James the Just as having the authority to decide the matter brought to the apostles and elders at Jerusalem, bolstering the claim that the "monarchical episcopacy" existed already in the earliest church.

The earliest post-apostolic writings, the Didache and Clement of Rome for example, speak of the churches as having two local church offices—presbyters and deacons—with the presbyter's office having the function of overseers. The beginnings of a single, ruling bishop may also be traced to the offices occupied by Timothy and Titus in the New Testament. We are told that Paul had left Timothy in Ephesus and Titus in Crete to oversee the local church (1 Tim. 1:3 and Titus 1:5). Paul commands them to ordain presbyters and bishops and describes the qualifications for these offices as distinct from each other. This issue, however, is complicated by the fact that the letters to Timothy and Titus are rejected as authentically Pauline by modern critical scholars. 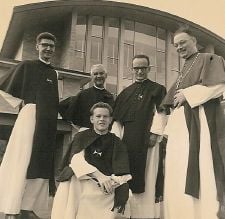 In any case, it is certain that the office of bishop and presbyter were clearly distinguished by the second century. The bishop functioned as the president of the council of presbyters, and so came to be distinguished both in honor and in prerogative while the presbyters were seen as deriving their authority from the bishop.

As the church was faced with the dual pressures of external persecution and internal schism, the bishop's office became increasingly important as the source of "apostolic" teaching authority and church order. Three offices become more clearly defined: bishop, elder (presbyter), and deacon, with the deacon's office being more strictly administrative. This is most clearly seen in the second century writings of St. Ignatius of Antioch (early second century):

See that ye all follow the bishop, even as Jesus Christ does the Father, and the presbytery as ye would the apostles; and reverence the deacons, as being the institution of God. Let no man do anything connected with the Church without the bishop. Let that be deemed a proper Eucharist, which is [administered] either by the bishop, or by one to whom he has entrusted it. (Epistle to the Smyraeans 8)

Presbyters soon began to take on more clearly sacerdotal functions, becoming "priests" not simply in the sense of spiritual elders, but as ministers of the sacraments such as baptism and communion, and probably others as well. The ancient sources regarding this are not clear and sometimes contradictory, possibly due to variations in local tradition.

Eventually, as the Church grew, individual congregations could no longer be served directly by a bishop. The bishop in a large city would thus appoint a presbyter to pastor the flock in each congregation, acting as his delegate. By the sixth century C.E., presbyters were functioning fully as priests in the sense that we think of the term today, and also as local pastors.

Presbyters after the Reformation

The identity of "presbyter" and "priest" persisted for the most part until the Protestant Reformation, when the reformers looked anew at the biblical texts for models of church governance and organization. In Presbyterian churches of the Calvinist tradition, the office of bishop was abolished and the heads of local congregations began using the name minister instead of priest. In this arrangement, the ministers' leadership is shared with presbyters (also called elders), who are usually elected by the local congregations. The presbyters help the professional ministers care for the church while keeping their secular professions. The "presbyterian" model is not limited to Presbyterian churches, but may also be found in Congregational, Baptist, and other church traditions as well. 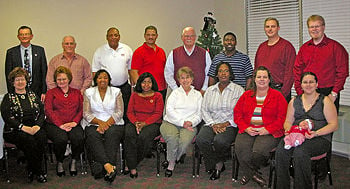 Contemporary Protestant church boards may or may not call their members "elders."

Based on the above, it should be clear that the popular impression of the term "priest" as derived from the priest's function of prayer is a misunderstanding of the presbyter's historical role. The Roman Catholic Church, the Orthodox Church, the Anglican/Episcopal Communion, and other groups generally refer to their presbyters in English as priests, and the role of these priests is certainly sacerdotal. Collectively, however, their "college" is referred to as the "presbyterium," "presbytery," or "presbyterate."

The term father for presbyters is generally restricted to Catholic and Orthodox usage, though many Anglicans and even some Lutherans will use the term, as well. It is not generally thought of as a title, however, but simply as an affectionate respectful term of address for the presbyter/elder/priest.

This usage is seen by some Protestant Christians as stripping the laity of its own rightful priestly status, in the sense that each person has the authority to approach God directly without the need of a human mediator. Some who defend the presbyters as priests insist that they do believe in the "priesthood of all believers," but they do not believe in the eldership of all believers. This is generally true of United Methodists, who ordain "elders" as clergy while affirming the priesthood of all believers. Some Anglican churches have abolished the use of the word "priest" for those ordained as such, referring to them instead as "presbyters."

In the Presbyterian tradition, presbyters are church elders elected to govern the church and assist the minister in his duties. Many Protestant churches have adopted the presbyterian model, but do not necessarily refer to the members of their church boards as "elders" or presbyters. While the presbyter's office seems to have been limited to men in the ancient traditions, most Protestant churches welcome women in the role of elders or church board members today.