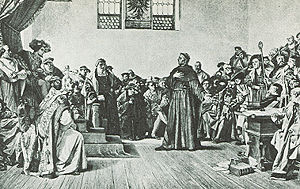 Luther Before the Diet of Worms, photogravure after the historicist painting by Anton von Werner (1843–1915) in the Staatsgalerie Stuttgart

The Diet of Worms (Reichstag zu Worms) was a general assembly (a Diet) of the estates of the Holy Roman Empire that took place in Worms, a small town on the Rhine River located in what is now Germany. It was conducted from January 28 to May 25, 1521, with Emperor Charles V presiding. Although other issues were dealt with at the Diet of Worms, it is most memorable for addressing Martin Luther and the effects of the Protestant Reformation. Notably, this was a political—not an ecclesiastical—assembly, reflecting the overlap at the time between what was considered “right believing” and loyalty to the state. In addressing the assembly, Luther stated his reliance on scripture alone and his rejection of papal and of conciliar authority. Before the assembly, Luther showed himself to be a man of courage, of conviction and of conscience.

The previous year, Pope Leo X had issued the papal bull Exsurge Domine, demanding that Luther retract 41 purported errors, some of them his 95 theses criticizing the church, others from other writings and sayings attributed to him. Luther was summoned by the emperor to appear before the Imperial Diet. Prince Frederick III, Elector of Saxony, obtained an agreement that if Luther appeared he would be promised safe passage to and from the meeting. Such a guarantee was essential after the treatment of Jan Hus, who was tried and executed at the Council of Constance in 1415, despite a safe conduct pass. Although condemned by the Diet, Luther was never arrested and as his popularity increased, concerns for his safety diminished.

Emperor Charles V opened the imperial Diet of Worms on January 22, 1521. Luther was summoned to renounce or reaffirm his views. When he appeared before the assembly on April 16, Johann Eck, an assistant of the Archbishop of Trier Richard Greiffenklau zu Vollraths, acted as spokesman for the emperor. He presented Luther with a table filled with copies of his writings. Eck asked Luther if the books were his and if he still believed what these works taught. Luther requested time to consider his answer. It was granted.

Luther prayed, consulted with friends and mediators and presented himself before the Diet the next day. When the counselor put the same questions to Luther, he said: "They are all mine, but as for the second question, they are not all of one sort." Luther went on to categorize the writings into three categories:

Counselor Eck, after countering that Luther had no right to teach contrary to the church through the ages, asked Luther to plainly answer the question: "Would Luther reject his books and the errors they contain?"

Luther replied: "Unless I am convicted by Scripture and plain reason—I do not accept the authority of popes and councils, for they have contradicted each other—my conscience is captive to the Word of God. I cannot and will not recant anything, for to go against conscience is neither right nor safe."[1]

According to tradition, Luther is then said to have spoken these words: "Hier stehe ich. Ich kann nicht anders. Gott helfe mir. Amen" ("Here I stand. I can do no other. God help me. Amen."). [1] Some scholars now question whether these famous words were actually spoken, however, since only the last four appear in contemporary accounts.

Private conferences were held to determine Luther's fate. Before a decision was reached, Luther left Worms on April 25 or 26 with a 20-day safe conduct pass.

After the safe conduct period had elapsed, Charles issued the Edict of Worms on May 25, 1521 (antedated as of May 8, 1521), declaring Luther an outlaw, banning his writings, and requiring his arrest: "We want him to be apprehended and punished as a notorious heretic."

The papal nuncio at the Diet, Girolamo Aleandro, had drawn up and proposed the fierce denunciations of Luther embodied in the edict, which permitted anyone to kill Luther without legal consequence. The edict was seen as a divisive move that distressed more moderate men, in particular Desiderius Erasmus.

Despite the agreement that he could return home safely, it was privately understood that Luther would soon be arrested and punished. To protect him from this fate, Prince Frederick seized him on his way home and hid him in Wartburg Castle. It was during his time in Wartburg that Luther began his German translation of the Bible. The edict was temporarily suspended at the Diet of Speyer in 1526 but then reinstated in 1529.

When Luther eventually came out of hiding, the emperor was preoccupied with military concerns, and because of rising public support for Luther among the German people, the Edict of Worms was never enforced. Luther continued to call for reform until his death in 1546. Luther later regretted that he had failed to act like Elijah at Worms, and to stand up against the political authorities who took it upon themselves to intervene between men and their God, "My conscience troubles me," he wrote, "because at Worms I yielded to the importunity of my friends, and did not play the part of Elijah."[2]