A papal bull is a special kind of patent or charter issued by a pope. It is named after the seal (bulla) that is appended to the end to authenticate it. 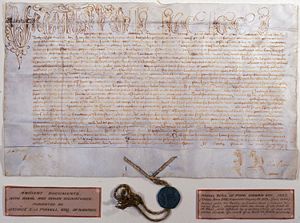 Papal bulls were originally issued by popes for various reasons of public communication, but after the fifteenth century C.E., they were only issued for the most formal or solemn of occasions. Modern scholars have retroactively used the term "bull" to describe any elaborate papal document issued in the form of a decree or privilege (solemn or simple), including some papal letters. Traditionally, papal bulls always bore a metal seal, but today bulls only do so on the most solemn of occasions.

Papal bulls have been in use since at least the sixth century CE, but the term was not used until around the middle of the thirteenth century C.E., and then it only referred to internal unofficial papal record keeping purposes; the term became official in the fifteenth century, when one of the offices of the papal chancery was named the "register of bulls" (registrum bullarum).

Original papal bulls exist in quantity only after the eleventh century when the transition from fragile papyrus to the more durable parchment was made. None survives in entirety from before 819 C.E. Some original leaden seals, however, still survive from as early as the sixth century C.E.

The most distinctive characteristic of a bull was its metal seal, which was usually made of lead, but on very solemn occasions was made of gold (as Byzantine imperial deeds often were). The "bulla" depicted the founders of the Church of Rome, the apostles Peter and Paul, identified by the letters Sanctus PAulus and Sanctus PEtrus. The name of the issuing pope was usually on the reverse side. The seal was then attached to the document either by cords of hemp (in the case of executory letters or letters of justice) or by red and yellow silk (in the case of letters of grace), which was looped through slits in the vellum of the document. Bulla is the name of this seal, which to ancient observers looked like a bubble floating on water: Latin bullire, "to boil."

Since the late eighteenth century C.E., the lead bulla has been replaced with a red ink stamp of Saints Peter and Paul with the reigning pope's name encircling the picture.

A papal bull traditionally begins with a Latin sentence containing three elements: the pope's name, the papal title episcopus servus servorum Dei, meaning “bishop, servant of the servants of God,” and the few Latin words that constitute the incipit from which the bull would also take its name for record keeping purposes, but which might not be directly indicative of the bull's purpose.

The bull is the only written communication in which the pope refers to himself as episcopus servus servorum Dei. For example, Benedict XVI, when he issues a decree in bull form, will begin the document with Benedictus, Episcopus, Servus Servorum Dei.

Apart from the above, the body of the text has no specific conventions for its formatting; it is often very simple in layout. The closing section consists of a short datum, mentioning the place it was issued, the day of the month and the year of the pope's pontificate and signatures, near which is attached the seal.

For the most solemn bulls, the pope will sign the document himself, in which case he used the formula Ego X Catholicae Ecclesiae Episcopus (I, X, Bishop of the Catholic Church). Following the signature in this case would be an elaborate monogram, the signatures of any witnesses, and then the seal. Nowadays, a member of the Roman Curia signs the document on behalf of the Pope, usually the Cardinal Secretary of State, and thus the monogram is omitted.

In terms of content, the bull is simply the format in which a decree of the pope appears. Any subject may be treated in a bull, such as statutory decrees, episcopal appointments, dispensations, excommunications, apostolic constitutions, canonizations and convocations. The bull was the exclusive letter format from the Vatican until the fourteenth century, when the papal brief began to appear. The papal brief is the less formal form of papal communication and is authenticated with a wax impression (now a red ink impression) of the Ring of the Fisherman. There has never been an exact distinction of usage between a bull and a brief, but nowadays most letters, including papal encyclicals, are issued as briefs.

The following list provides a sample of some Papal bulls organized by the year in which they were issued (the list is not exhaustive):

Finally, a recurrent papal bull, In Coena Domini ("At the table of the Lord"), was issued annually between 1363 and 1770 at first on Holy Thursday, and later on Easter Monday.