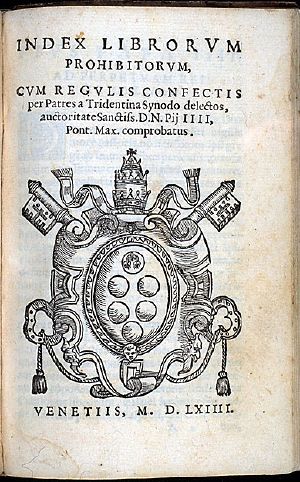 The Index Librorum Prohibitorum ("List of Prohibited Books") was a list of publications prohibited by the Roman Catholic Church. The avowed aim of the list was to protect the faith and morals of Roman Catholics by preventing them reading of so-called "immoral" books or works containing theological errors. The various editions also contain the rules of the Church relating to the reading, selling and censorship of books. Books that passed inspection were printed with nihil obstat ("nothing forbids") or Imprimatur ("let it be printed") on the title page.

The list was not simply a reactive work. Roman Catholic authors had the opportunity to defend their writings and could prepare a new edition with the necessary corrections or elisions, either to avoid or to limit a ban. Pre-publication censorship was encouraged; self-censorship, however, was incalculable.

The idea of a religious list of prohibited books finds early precedent in the ancient Christian debates concerning the formation of the Bible canon in response to Marcionism and spurious Gnostic writings. Many gnostic works were rejected by the church and burned, hidden or destroyed.

In the Middle Ages, The first list of prohibited books was not published in Rome, but in Roman Catholic Netherlands (1529). Venice (1543) and Paris (1551, under the terms of the Edict of Châteaubriant) followed this example. The first Roman Index was the work of Pope Paul IV (1557, 1559). The work of the censors was considered too severe and, after the Council of Trent had revised the church legislation on the prohibition of books, Pope Pius IV promulgated in 1564 the so called Tridentine Index, the basis of all later lists until Pope Leo XIII, in 1897, published his Index Leonianus. The very first lists were the work of the Sacred Congregation of the Inquisition of the Roman Catholic Church (later the Holy Office, now the Sacred Congregation for the Doctrine of the Faith).

In 1571, a special congregation was created, the Sacred Congregation of the Index, which had the specific task to investigate those writings that were denounced in Rome as being not exempt of errors, to update the list of Pope Pius IV regularly and also to make lists of corrections in case a writing was not in itself damnable but only in need of correction and put on the list with a mitigating clause (e.g., donec corrigatur (forbidden if not corrected) or donec expurgetur (forbidden if not purged)). This sometimes resulted in very long lists of corrections, published in the Index Expurgatorius. Prohibitions made by other congregations (mostly the Holy Office) were simply passed on to the Congregation of the Index, where the final decrees were drafted and made public, after approval of the Pope (who always had the possibility to condemn an author personally—only a few examples, such as Lamennai and George Hermes). The Congregation of the Index was abolished in 1917, when the rules on the reading of books were again elaborated in the new Codex Iuris Canonici. From that date on, the Holy Office (again) took care of the index.

The Index was regularly updated until the 1948 edition. This 32nd edition contained 4,000 titles censored for various reasons: heresy, moral deficiency, sexual explicitness, and so on. Among the notable writers on the list were Desiderius Erasmus, Edward Gibbon, Giordano Bruno, Laurence Sterne, Voltaire, Daniel Defoe, Nicolaus Copernicus, Honoré de Balzac, Jean-Paul Sartre, Nikos Kazantzakis, as well as the Dutch sexologist Theodoor Hendrik van de Velde, author of the sex manual The Perfect Marriage. A complete list of the authors and writings present in the subsequent editions of the index are listed in J. Martinez de Bujanda, Index librorum prohibitorum, 1600-1966, Geneva, 2002. Almost every modern Western philosopher was included on the list—even those that believed in God, such as Descartes, Kant, Berkeley, Malebranche, Lamennais and Gioberti. That some atheists, such as Schopenhauer and Nietzsche, were not included was due to the general (Tridentine) rule that heretical works (i.e., works that contradict Catholic dogma) are ipso facto forbidden. Some important works are absent simply because nobody bothered to denounce them.

Many actions of the congregations were of a definite political content. In 1926, the Action Française magazine, espousing far-right French causes, was put on the Index. Alfred Rosenberg’s Der Mythus des 20. Jahrhunderts (The Myth of the Twentieth Century) and his An die Dunkelmänner unserer Zeit: eine Antwort auf die Angriffe gegen den "Mythus des 20. Jahrhundert" (Regarding The Dark Men of Our Time: an Answer to the Problems against the "Myth of the Twentieth Century"), were condemned by decrees of February 7, 1934, and of July 17, 1935, respectively. Ernst Bergmann's Die deutsche Nationalkirche (The German National Church) and his Die natürliche Geistlehre (Natural Spirit Teachings), by decrees of February 7, 1934, and November 17, 1937. Hitler's Mein Kampf was not placed on the Index, however, as censors continually postponed and eventually terminated its examination.

The effects of the Index were felt throughout much of the Roman Catholic world. From Quebec to Poland it was, for many years, very difficult to find copies of banned works, especially outside of major cities. Under Pope Paul VI, the Congregation for Doctrine of Faith ceased publication of the Index in 1966 following the end of the Second Vatican Council, largely for practical considerations. Although now suppressed (no longer being enforceable under canonical law), the Index has not strictly been abolished nor rescinded, not repudiated nor condemned. The moral obligation of not circulating or reading those writings which endanger faith and morals, was reaffirmed in 1966, in the same document, Notification by Congregation for Doctrine of Faith: "This Congregation for Doctrine of Faith (...) reaffirms that its Index retains its moral value (...) in the sense that it is appealing to the conscience of the faithful (...) to be on their guard against written materials that can put faith and good conduct in danger" (Signed Alfredo card. Ottaviani, June 14, 1966).[1] It should be noted that Cardinal Ottaviani, who signed the decree to suppress the Index, was one of the most conservative members of the College of Cardinals at the time. Further, on every bishop in the Roman Catholic Church lays great responsibility for the moral welfare of his flock: hence, he may still today issue an "admonitum," an admonition to the faithful that a book is pernicious and thus ought not be read.

In a few cases, according to The Book of Lists by Irving Wallace, Amy Wallace and David Wallechinsky, all works of a particular writer were on the Index: Thomas Hobbes, Émile Zola, Jean-Paul Sartre. As for Benedict Spinoza, the Church put all of his posthumous works on the Index. With other writers, only certain books were banned: Samuel Richardson (Pamela), Emanuel Swedenborg (The Principia), or Immanuel Kant (Critique of Pure Reason), for example.

There have been cases of reversal with respect to some people whose works were on the Index. For instance, Mary Faustina Kowalska's work and her diary of her reported Divine Mercy visions of Jesus and Mary were initially on the Index. She died in obscurity, and only after her death did the sisters of her convent send her writings to the Vatican for its approval. The version of Faustina's writings that reached Rome was incorrectly translated; the questionable material could not be corrected with the original Polish version owing to the difficulties in communication throughout World War II and the subsequent Communist Iron Curtain. Only much later, in the 1970s—four decades after she had died—had then-Karol Wojtyla, who was Archbishop over the area where Faustina had spent her last years, initiate a re-working of the translation. This version was accepted by Rome in 1976; two years later, Archbishop Wojtyla was elected Pope, becoming John Paul II. As Pope, John Paul II had the pleasure of beatifying Faustina, then later Canonizing her on Easter 2000, the first saint proclaimed for the third millennium. Upon canonizing her, the Feast Day "Divine Mercy Sunday" proposed by Faustina was made obligatory for the entire Church. Though her writings were once banned, today Faustina's Vatican biography quotes samples of her reported conversations with Jesus Christ from her diary and Divine Mercy Sunday (based on her writings) is now celebrated on the Sunday after Easter.[2]

Not on the Index were Aristophanes, Juvenal, John Cleland, James Joyce and D. H. Lawrence. According to Wallace et al, this was because the primary criterion for banning the work was anticlericalism, blasphemy, heresy.

Surprisingly, some authors whose views are generally unacceptable to the Church (e.g. Charles Darwin, Karl Marx or Hitler) were never put on the Index.[3][4]

Some notable writers with works on the Index Librorum Prohibitorum