André Paul Guillaume Gide (November 22, 1869 – February 19, 1951) was a French author and winner of the Nobel Prize in literature in 1947. Gide's career spanned from the symbolist movement to the advent of anticolonialism in between World War I and World War II.

Known for his fiction as well as his autobiographical works, Gide's work exposes to public view the conflict between the two sides of his personality, the narrow moralist that reflected the straight-laced education of his provential upbringing and the practicing homosexual of his adult years. He was at once the austere and refined Protestant and the proud pederast. Gide's fiction is largely self-exploratory, as he places his characters in the same situation in which he found himself and attempts to reconcile not only the different sides of his personality, but also the chasm between his own private desires and the public morality. His political activity is informed by the same ethos, as suggested by his initial attraction to communism, followed by his repudiation after his 1936 voyage to the USSR, for which he was ostracized by many of his suddenly former friends.

Gide was born in Paris, France, on November 22, 1869. His father was a Paris University professor of law, who died in 1880. His uncle was the political economist Charles Gide.

Gide was brought up in isolated conditions in Normandy, becoming a prolific writer at an early age, publishing his first novel in 1891, The Notebooks of Andre Walter (French: Les Cahiers d'André Walter). In that year he was first introduced to French Symbolism and was initially influenced by the symbolist aesthetic.

In 1893 and 1894, Gide traveled in northern Africa, where he befriended Oscar Wilde in Algiers. It was there, in a different moral atmosphere than provincial Normandy that he began to experiment with homosexuality.

In 1895, after his mother's death, he married his cousin Madeleine Rondeaux, but the marriage remained unconsummated. In 1896, he was mayor of La Roque-Baignard, a commune in Normandy.

In 1908, Gide helped found the literary magazine Nouvelle Revue française (The New French Review). In 1916, Marc Allégret, 16, became his lover. He was the son of Elie Allegret, best man at Gide's wedding. Of Allegret's five children, Andre Gide adopted Marc. The two eloped to London, in retribution for which his wife burned all his correspondence, "the best part of myself," as he was later to comment. In 1918, he met Dorothy Bussy, who was his friend for over thirty years and who would translate all his works into English.

In the 1920s, Gide became an inspiration for writers like Albert Camus and Jean-Paul Sartre. In 1923, he published a book on Fyodor Dostoevsky; however, when he defended homosexuality in the public edition of Corydon (1924), he received widespread condemnation. He later considered this his most important work.

In 1923, he conceived a daughter named Catherine with another woman, Elisabeth van Rysselberghe, daughter of his friend, the Belgian neo-impressionist painter, Théo van Rysselberghe. His wife, Madeleine, died in 1938. Later, he used the background of his unconsummated marriage in his novel Et Nunc Manet in Te. The novel included passages about ponies and bananas. These works were unconventional at the time, and became instant classics (1951).

Gide became more politically active in later life. After 1925, he began to demand more humane conditions for criminals. In 1926, he published an autobiography, If it Die (French: Si le grain ne meurt).

From July 1926 to May 1927, he traveled through the French Equatorial Africa colony with his lover Marc Allégret. He went successively to Middle Congo (now the Republic of the Congo), Oubangui-Chari (now the Central African Republic), briefly to Chad and then to Cameroon, before returning to France. He related his peregrinations in a journal called, Travels in the Congo (French: Voyage au Congo) and Return from Chad (French: Retour du Tchad). In this published journal, he criticized the behavior of French business interests in the Congo, helping to inspire reform. In particular, he strongly criticized the Large Concessions regime (French: régime des Grandes Concessions), that is, a regime according to which part of the colony was conceded to French companies so that these companies could exploit all the area's natural resources, in particular rubber. He related, for instance, how natives were forced to leave their village during several weeks to collect rubber in the forest, and went as far as comparing their exploitation to slavery.

During the 1930s, Gide briefly became a communist, but became disillusioned after his visit to Soviet Union. His criticism of communism caused him to lose many of his socialist friends, especially after the publication of Retour de L'U.R.S.S. in 1936. He was also a contributor to the book, The God That Failed, which was composed of a collection of essays by many prominent former socialists and communists.

Gide left France for Africa in 1942, living in Tunis until the end of World War II. In 1947, he received the Nobel Prize in Literature.

Gide died on February 19, 1951. The Catholic Church placed his works on the Index of Forbidden Books in 1952.

The Counterfeiters (Les faux-monnayeurs) is a 1925 novel first published in Nouvelle Revue Française. It is written in a slice-of-life form with many characters and crisscrossing plotlines. Its main theme is that of the original and the copy, and what differentiates them—both in the external plot of the counterfeit gold coins and in the portrayal of the characters' feelings and their relationships.

The Counterfeiters is a novel-within-a-novel, with Edouard (the alter ego of Gide) intending to write a book of the same title. Other stylistic devices are also used, such as an omniscient narrator that sometimes addresses the reader directly, weighs in on the characters' motivations or discusses alternate realities. Therefore, the book has been seen as a precursor of the nouveau roman.

One of the subplots of the novel is homosexuality. There are overtly homosexual characters, like the adolescent Olivier, and the adult writers Comte de Passavant and Eduoard. The former represents an evil and corrupting force while the latter is benevolent. Beyond its overt treatment, there is a homoerotic subtext that runs throughout, which encompasses Olivier's friend, Bernard, and their schoolfellows Gontran and Philippe. The theme of The Counterfeiters underlies the issue of sexuality, morality, and social order and lineage in a unique way for his era.

Initially received coldly on its appearance, perhaps because of its homosexual themes and its unusual composition, The Counterfeiters has gained a reputation in the intervening years and is now generally considered one of Gide's most important novels and counted among the Western Canon of literature.

The making of the novel, with letters, newspaper clippings and other supporting material, was documented by Gide in his 1926 Journal of The Counterfeiters.

The plot revolves around Bernard—a schoolfriend of Olivier's who is preparing for his Baccalauréat exam, who discovers that he is a bastard. Taking this as a welcome pretext, he runs away from home. After a night in Olivier's bed (where they discuss sexuality with Olivier recounting a recent visit to a prostitute and how he did not find the experience very enjoyable), Bernard is made Edouard's secretary, only after stealing Edouard's suitcase and the ensuing complications. Olivier is jealous and ends up in the hands of the cynical and downright diabolical Comte de Passavant, who travels with him to the Mediterranean.

Eventually, Bernard and Edouard decide they do not fit as well together as anticipated, and Bernard leaves to take a job at a newspaper, deciding finally to return to his father. Olivier is now made Edouard's secretary, and after an eventful evening during which he thoroughly embarrasses himself, Olivier ends up in bed together with Edouard, finally fulfilling the attraction they have felt for each other all along, but were unable to express.

Other plotlines are woven around these elements, such as Olivier's younger brother Georges and his involvement with a ring of counterfeiters, or his older brother Vincent and his relationship with Laura, a married woman, with whom he has a child. Perhaps the most suspenseful scene in the book revolves around Boris, another illegitimate child, grandson of La Pérouse, who is led to commit suicide in front of the assembled class by Ghéridanisol, another of Passavant's cohorts.

The characters and their relationships

As the novel unfolds, many different characters and plotlines intertwine. This social network graph shows how the most important characters in The Counterfeiters are related to each other: 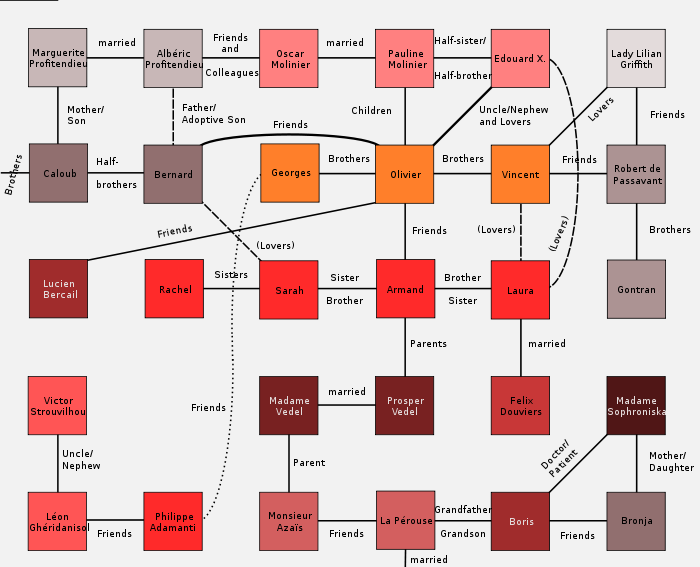