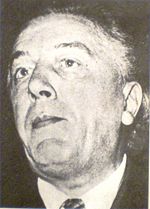 André Breton (in French pronounced [ɑ̃dʀe bʀəˈtɔ̃]) (February 19, 1896 – September 28, 1966) was a French writer, poet, and surrealist theorist, and is best known as the main founder of surrealism, a cultural movement that began in the mid-1920s centered in Paris.

Surrealist works feature the element of surprise, unexpected juxtapositions and the use of non sequiturs. Breton was explicit in his assertion that Surrealism was above all a revolutionary movement. Breton was an ardent communist, and numerous important Surrealist artists, including perhaps its most famous practitioner, Salvador Dali, would break from Breton over his political commitments.

His writings include the Surrealist Manifesto of 1924, in which he defined surrealism as pure psychic automatism. Automatic writing or drawing (distinguished from drawn expression of mediums) was developed by the surrealists, as a means of expressing the subconscious. In automatic drawing, the hand is allowed to move 'randomly' across the paper. In applying chance and accident to mark-making, drawing is to a large extent freed of rational control. Hence the drawing produced may be attributed in part to the subconscious, or the Freudian unconscious and may reveal something of the psyche, which would otherwise be repressed. His novel, Nadja was a semi-autobiographical account of his encounter with a patient of Pierre Janet.

Born to a family of modest means in Tinchebray (Orne) in Normandy, he studied medicine and psychiatry. During World War I he worked in a neurological ward in Nantes, where he met the spiritual son of Alfred Jarry, Jacques Vaché, whose anti-social attitude and disdain for established artistic tradition influenced Breton considerably. Vaché committed suicide at age 24 and his war-time letters to Breton and others were published in a volume entitled Lettres de guerre (1919), for which Breton wrote four introductory essays.

Breton was an avid collector of art, ethnographic material, and unusual trinkets. He was particularly interested in materials from the northwest coast of North America. When faced with a financial crisis in 1931, most of his collection (along with his friend Paul Éluard's) was auctioned off. He subsequently rebuilt the collection, which was preserved by family members from the time of his death until 2003, at which time his books, art, and ethnographic materials were auctioned by Calmels Cohen.

From Dada to Surrealism

In 1919 Breton founded the review Littérature with Louis Aragon and Philippe Soupault. He also connected with Dadaist Tristan Tzara. In 1924 he was instrumental to the founding of the Bureau of Surrealist Research.

In The Magnetic Fields (Les Champs Magnétiques), a collaboration with Soupault, he put the principle of automatic writing into practice. He published the Surrealist Manifesto in 1924, and was editor of La Révolution surréaliste from 1924. A group coalesced around him—Philippe Soupault, Louis Aragon, Paul Éluard, René Crevel, Michel Leiris, Benjamin Péret, Antonin Artaud, and Robert Desnos.

Anxious to combine the themes of personal transformation found in the works of Arthur Rimbaud with the politics of Karl Marx, Breton joined the French Communist Party in 1927, from which he was expelled in 1933. During this time, he survived mostly from the sale of paintings from his art gallery.

Under Breton's direction, surrealism became a European movement that influenced all domains of art, and called into question the origin of human understanding and human perception.

In 1935, there was a conflict between Breton and Ilya Ehrenburg during the first "International Congress of Writers for the Defense of Culture" which opened in Paris in June. Breton and his fellow surrealists were insulted by an Ehrenburg pamphlet which accused the surrealists of pederasty, among other things. Breton slapped Ehrenburg several times on the street, which led to the expulsion of the surrealists from the Congress. Crevel, who according to Salvador Dalí, was "the only serious communist among surrealists" [1] was isolated from Breton and other surrealists, who were unhappy with Crevel because of his homosexuality and upset with communists as a whole.

In 1938 Breton accepted a cultural commission from the French government to travel to Mexico. After a conference held at the National Autonomous University of Mexico on surrealism, Breton stated after getting lost in Mexico City (as no one was waiting for him at the airport):

"I don't know why I came here. Mexico is the most surrealist country in the world."

While in Mexico, Breton had the opportunity to meet Leon Trotsky. Breton and other surrealists sought refuge via a long boat ride from Patzcuaro to the surreal town of Erongaricuaro. Diego Rivera and Frida Kahlo were among the visitors to the hidden community of intellectuals and artists. At a time when artistic freedom was under attack during the buildup to the Second World War—when Stalinist Russia was enduring the Great Purge—Breton and Trotsky wrote a manifesto Pour un art révolutionnaire indépendent (published under the names of Breton and Diego Rivera) which called for "complete freedom of art."

Breton was again in the medical corps of the French Army at the start of World War II. The Vichy government banned his writings as "the very negation of the national revolution"[2] and Breton sought refuge through the American Varian Fry, escaping to the United States and the Caribbean in 1941. Breton made the acquaintance of Martinican writer Aimé Césaire, and later penned the introduction to the 1947 edition of Césaire's Cahier d'un retour au pays natal. During his exile in New York City, he met Elisa, the Chilean woman who would become his third wife.

In 1944, he and Elisa traveled to Gaspésie in Québec, Canada, where he wrote Arcane 17, a book which expresses his fears of World War II, describes the marvels of the Rocher Percé and the northeastern end of North America, and celebrates his newly found love with Elisa.

Breton returned to Paris in 1946, where he intervened against French colonialism (for example as a signatory of the Manifesto of the 121 against the Algerian war) and continued, until his death, to foster a second group of surrealists in the form of expositions or reviews (La Brèche, 1961-1965). In 1959, André Breton organized an exhibit in Paris.

André Breton died in 1966 at 70 and was buried in the Cimetière des Batignolles in Paris.

His works include the Surrealist Manifesto as well as the case studies Nadja (1928) and Mad Love (L'Amour Fou) (1937).

The first Surrealist manifesto was written and released to the public in 1929. The document defines Surrealism as:

Psychic automatism in its pure state, by which one proposes to express—verbally, by means of the written word, or in any other manner—the actual functioning of thought. Dictated by the thought, in the absence of any control exercised by reason, exempt from any aesthetic or moral concern.

The text includes numerous examples of the applications of Surrealism to poetry and literature, but makes it clear that the tenets of Surrealism can be applied in any circumstance of life, and is not merely restricted to the artistic realm. The importance of the dream as "a reservoir of Surrealist inspiration" is also highlighted.

Breton also discusses his initial encounter with the surreal in a famous description of a hypnagogic state that he experienced in which a strange phrase inexplicably appeared in his mind: There is a man cut in two by the window. This phrase echoes Breton's apprehension of Surrealism as the juxtaposition of two distant realities brought together to create a new, uncanny union.

The manifesto also refers to the numerous precursors of Surrealism that embodied the Surrealist spirit prior to his composing the manifesto, including such luminaries as the Marquis de Sade, Charles Baudelaire, Arthur Rimbaud, Comte de Lautréamont, Raymond Roussel, even Dante.

The works of several of his contemporaries in developing the Surrealist style in poetry are also quoted, including texts by Philippe Soupault, Paul Éluard, Robert Desnos and Louis Aragon, among others.

The manifesto was written with a great deal of absurdist humor, demonstrating the influence of the Dada movement which immediately preceded it in France, and in which Breton was also a key player.

The text concludes by asserting that Surrealist activity follows no set plan or conventional pattern, and that Surrealists are ultimately nonconformists.

Surrealism would have a profound influence on Modern art, and included many of the greatest artists of the twentieth century. It also introduced the notion of automatic drawing.

Championed by surrealism, automatic drawing was pioneered by André Masson. Artists who practiced automatic drawing include Joan Miró, Salvador Dalí, Jean Arp as well as Breton. The technique was transferred to painting (as seen in Miró's paintings which often started out as automatic drawings), and has been adapted to other media; there have even been automatic "drawings" in computer graphics. (Surrealist artists often found that their use of 'automatic drawing' was not entirely automatic, rather it involved some form of conscious intervention to make the image or painting visually acceptable or comprehensible, "…Masson admitted that his 'automatic' imagery involved a two-fold process of unconscious and conscious activity…."[3])

Pablo Picasso was also thought to have expressed a type of automatic drawing in his later work, and particularly in his etchings and lithographic suites of the 1960s.

Most of the surrealists' automatic drawings were illusionistic, or more precisely, they developed into such drawings when representational forms seemed to suggest themselves. In the 1940s and 1950s the French-Canadian group called Les Automatistes pursued creative work (chiefly painting) based on surrealist principles. They abandoned any trace of representation in their use of automatic drawing. This is perhaps a more pure form of automatic drawing since it can be almost entirely involuntary - to develop a representational form requires the conscious mind to take over the process of drawing, unless it is entirely accidental and thus incidental. These artists, led by Paul-Emile Borduas, sought to proclaim an entity of universal values and ethics proclaimed in their manifesto Refus Global.

Retrieved from https://www.newworldencyclopedia.org/p/index.php?title=Andre_Breton&oldid=1054384
Categories:
Hidden category:
This page was last edited on 19 June 2021, at 07:20.
Content is available under Creative Commons Attribution/Share-Alike License; additional terms may apply. See Terms of Use for details.