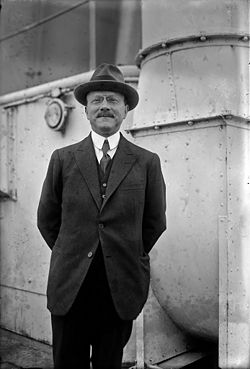 André-Gustave Citroën (November 2, 1878 - July 3, 1935) was a French Jewish entrepreneur of Dutch and Polish descent. He is remembered chiefly for the make of car named after him, but also for his invention of double helical gears. During World War I, he became the sole producer of certain vital components for munitions manufacture for the French army due to the mass production capacity of his factory.

Despite his acknowledged contribution to popularizing the automobile and as the pioneer of its mass production in Europe, he was never an enthusiast of the automobile as such. He was, however, interested in developing engineering processes that would make mass production possible so that non-elite could also afford to buy cars. After increasing the productivity of the Mors automobile company, he later converted his war-time munitions factory for automobile manufacturing and the first Citroën rolled off the assembly line in 1919. His company went bankrupt during the Great Depression and although it survived, he lost control. In addition to pioneering mass production and the concept of after-sale service, he also contributed significantly to improving employee working conditions and benefits.

André-Gustave was the fifth and last child of the Dutch Jewish diamond merchant, Levie Citroen, and Mazra Kleinmann (of Warsaw, Poland). He was related to the famous British philosopher A.J. Ayer. The Citroen family moved to Paris from Amsterdam in 1873. Upon arrival, the diaeresis was added to the name, changing Citroen (Dutch for Lemon) to Citroën. His father committed suicide when Citroen was only six years old.

Citroën attended the lycee Louise le Grande, graduating in 1894, with the highest grades. This gained him admission to the prestigious École Polytechnique Paris. He graduated in 1898, but his academic performance had suffered from his mother’s death and his results were unimpressive. This circumscribed his job possibilities since companies recruited those students in the top percentile, so he joined the army as an engineering officer. This, however, gave him practical experience and he quickly matured as an engineer. While on leave, he visited family members in Poland, where wooden gears used to drive cotton mills caught his attention. Realizing that steel gears would improve efficiency, he started to work on this concept and also obtained a patent for a steel gear designed by a Russian company. In 1904, with several friends, he set up his own factory to produce double-helical gearwheels.

Citroën studied the wooden gear drives in the thriving cotton mills and when he had finished his leave and returned to duty in Paris, he secured the patent rights to a steel herring-bone type gear invented by a now anonymous Russian. In 1904, he and two friends set up a small workshop to produce his own pattern of double-helical gearwheels. Hinstin, Frères, Citroën et Cie prospered and very soon, Citroën was a recognized name in French engineering. To speed production, he began to refine the manufacturing process, introducing flow controls and using the latest machinery. His methods not only involved engineering techniques and production control, but maintaining good worker relations. For example, he was in favor of worker benefits and later pioneered maternity leave for his women workers. He established dental and medical facilities, built a worker’s gymnasium and provided a crèche. His gears were in great demand, and buyers included ship builders as well as automobile manufacturers, such as the Mors firm, whose care were having success on the racing circuit; his brother was married to the daughter of the company Chairman. Several important contracts from Mors resulted in Citroën’s own company building engines on their behalf. By 1910, the company’s annual turnover was a million francs.

Relationship with the Mors company

In 1908, Citroën took leave from his own company to assist the Mors to increase their production, because sales were falling. Their cars were large and expensive. By applying his production techniques, he increased the Mors' production from 125 cars to 1,200 cars per year.

His own company continued to expand and went public in 1913.

Citroën was still a Captain in the Army Reserves and as the world war broke out, he returned to active service, this time in the artillery. His engineering ability soon proved useful when he turned his attention to solving the ammunition shortage, of which he quickly became aware when his own unit was unable to return fire for lack of shells. He devised a scheme for applying his mass production processes to shell manufacture, which he presented to the General in charge of Artillery, who immediately commissioned him to implement the plan. The army provided land and funding. Production of shells reached 55,000 per day. After this success, he was given the responsibility of organizing the supplying of all French munitions plants with raw materials. Most of the workers were women, known as munitionettes, and it was at this period that Citroën pioneered maternity support for workers.[1]

With the end of the war, Citroën needed to switch the factory to peace time production, as he was anxious to continue using the already "fully equipped precision manufacturing plant."[2] His earlier experience with the Mors firm, and a chance meeting with Henry Ford suggested that automobile production was an attractive venture, so in 1919, he founded the Citroën automobile company in by converting his existing munitions factory. His aim was to mass-produce a small, inexpensive automobile. His industrialist and entrepreneurial qualities in the automotive industry have likened him to a European Henry Ford, whom he certainly admired. He also used mass publicity to promote his products, once having his name and logo illuminated on the Eiffel Tower.[3] New Citroën factories were constructed, and his firm became one of the largest auto-manufacturing companies in France. He did not design the bodies but contracted with the American engineer, Edward G. Budd. In 1928, their collaboration resulted in the first all-steel car body. Refusing to retrench during the Great Depression, Citroën introduced the only popular front-wheel-drive car of its time, the Traction Avant (1934).

Unfortunately, because the Avant proved to be very popular, Citroën went bankrupt in 1934, and was "legally required to retire." Control went to the Michelin Corporation, the largest creditor.[4] While the Great Depression was a major cause of the company’s financial problems, Citroën, known as a "flashy dresser" also had a gambling addiction which was also a major factor. A Time article at the time described him as "the flashy little Jew whom everyone calls the Ford of France"—language that would subsequently become unacceptable.[5] The article also mentions that he threatened to commit suicide rather than lose control of the company he had founded. His lavish life-style made him the subject of gossip columns.[6] According to Valpato, Citroën's constant replacement of machines—he was convinced that newer machines were more efficient—also placed a financial strain on the company.[7]

Citroën financed various scientific expeditions, including one that traveled 8,000 miles (13,000 km) by car, from Beirut to Peking (1931–32) following the Silk Road and the 1922 cross-Sahara expedition to Timbuktu. The lighting of the Arc de Triomphe and of the Place de la Concorde were gifts from Citroën to the city of Paris. Never a car enthusiast as such, he actually disliked driving "on the open road."[8] Citroën also established a toy factory manufacturing miniature cars, giving his own children an electronically powered toy.

He died in Paris, France, of stomach cancer in 1935, and was interred in the Cimetière du Montparnasse in Paris. 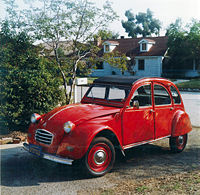 In 1992, the Parc André Citroën public garden in Paris was named after him. In 1998, he was inducted into the Automotive Hall of Fame in Dearborn, Michigan.

Continued popularity of the Citroën car, especially as a people’s car, represents an enduring legacy. The 2CV (1948) was, like the Volkswagen, designed to be a people’s car and to put the whole country on the road. In the 1970s it acquired icon status among the upwardly mobile.[9] Possession became something of an anti-snob symbol. His concern for employee benefits also contributed to improvement in working conditions for industrial workers generally, and is said to have inspired the food-card system that was introduced as part of post-war reconstruction. Owen (1975) says that "his bankruptcy and early death in 1935 took him away from the company he had built at a crucial stage in its development—yet his ideas, attitudes and influences have lived on through successive takeovers and mergers in such an extraordinary way that even now Citroën cars owe far more to him than those of most other firms have inherited from their original creators."[10] In particular, Citroën started the tradition of innovation in solving engineering problems that continued to make many Citroën products unique in certain features within the automobile world. He also saw selling cars in terms of selling "a service," and pioneered warranties and after-sale service.[11] Citroën's concern for labor welfare suggests that while he was certainly interested in making money, he did not regard the industry of manufacturing as solely about owner profit but saw the process as a type of cooperation between owners and labor, from which the latter would also benefit.

Retrieved from https://www.newworldencyclopedia.org/p/index.php?title=Andre-Gustave_Citroen&oldid=1094465
Categories:
Hidden category:
This page was last edited on 9 January 2023, at 01:39.
Content is available under Creative Commons Attribution/Share-Alike License; additional terms may apply. See Terms of Use for details.