John Galsworthy (August 14, 1867 – January 31, 1933) was an English novelist and playwright. Notable works include The Forsyte Saga (1906–1921) and its sequels, A Modern Comedy and End of the Chapter. Galsworthy's novels addressed the class system in England, especially the rise of the merchant class, or "new money," and its relations to the aristocracy, or "old money." In the wake of the Industrial Revolution and urbanization, Galsworthy's works reflected the inevitable conflicts that arose during the transition from a more pastoral society to a modern one. He won the Nobel Prize for literature in 1932.

Galsworthy was born at Kingston Hill in Surrey, England, into an established wealthy family, the son of John and Blanche Bailey (nee Bartleet) Galsworthy. He attended Harrow and New College, Oxford, training as a barrister and was called to the bar in 1890. However, he was not interested in practicing law and instead traveled abroad to look after the family's shipping business interests. During these travels he met Joseph Conrad, then the first mate of a sailing-ship moored in the harbor of Adelaide, Australia, and the two future novelists became close friends. In 1895, Galsworthy began an affair with Ada Nemesis Pearson, the wife of one of his cousins. After her divorce the pair eventually married on September 23, 1905, and stayed together until his death in 1933. During World War I, he worked in a hospital in France as an orderly after being passed over for military service. John Galsworthy lived for the final seven years of his life at Bury in West Sussex. He died from a brain tumor at his London home, Grove Lodge, Hampstead. In accordance with his will he was cremated at Woking, and his ashes scattered over the South Downs from the air.[1] There is also a memorial in Highgate "New" Cemetery.[2]

From the Four Winds was Galsworthy's first published work in 1897, a collection of short stories. These, and several subsequent works, were published under the pen name John Sinjohn, and it would not be until The Island Pharisees (1904) that he would begin publishing under his own name, probably owing to the death of his father. His first play, The Silver Box (1906), became a success, and he followed it up with The Man of Property (1906), the first in the Forsyte trilogy. Although he continued writing both plays and novels, it was as a playwright that he was mainly appreciated at the time. Along with other writers of the time, such as Shaw, his plays addressed the class system and social issues; two of his best known plays were Strife (1909) and The Skin Game (1920).

Over time his reputation shifted; he is now far better known for his novels and particularly The Forsyte Saga, the first of three trilogies of novels about the eponymous family and connected lives. These books, as with many of his other works, dealt with class, and in particular upper-middle class lives. Although sympathetic to his characters, he highlights their insular, snobbish, and acquisitive attitudes and their suffocating moral codes. He is viewed as one of the first writers of the Edwardian era; challenging in his works some of the ideals of society depicted in the proceeding literature of Victorian England. The depiction of a woman in an unhappy marriage furnishes another recurring theme in his work. The character of Irene in The Forsyte Saga is drawn from Ada Pearson even though her previous marriage was not as miserable as Irene's. 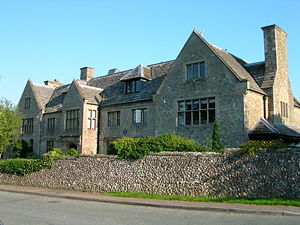 His work is often less convincing when it deals with the changing face of wider British society and how it affects people of the lower social classes. Through his writings he campaigned for a variety of causes, including prison reform, women's rights, animal welfare, and censorship, but these have limited appeal outside the era in which they were written.

He was elected as the first president of the International PEN literary club in 1921, was appointed to the Order of Merit in 1929—after earlier turning down a knighthood—and was awarded the Nobel Prize in 1932.

The popularity of his fiction waned quickly after his death, but the hugely successful adaptation of The Forsyte Saga in 1967 renewed interest in the writer.

A number of John Galsworthy's letters and papers are held at the University of Birmingham Special Collections.

The Forsyte Saga has been filmed several times:

Escape was filmed in 1930 and 1948. The latter was directed by Joseph L. Mankiewicz, starring Rex Harrison, Peggy Cummings, William Hartnell. The screenplay was by Philip Dunne.

One More River (a film version of Galsworthy's Over the River) was filmed by James Whale in 1934. The film starred Frank Lawton, Colin Clive (one of Whale's most frequently used actors), and Diana Wynyard. It also featured Mrs. Patrick Campbell in a rare sound film appearance.