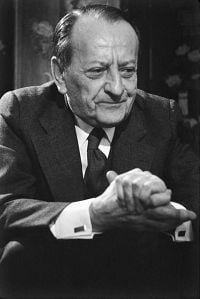 André Malraux (November 3, 1901 - November 23, 1976) was a French author, adventurer and statesman preeminent in the world of French politics and culture during his lifetime. His experiences in Indochina would heavily influence his intellectual development. He became a strong anti-colonialist and like a lot of intellectuals during the early twentieth century, he gravitated toward socialism. In addition to his novels, which included Man's Fate, he was very politically active, fighting for the Republicans during the Spanish Civil War and with the French Resistance during World War II.

André Malraux was born on November 3, 1901 in Paris. His parents separated in 1905 and eventually divorced. He was raised by his mother, Berthe Lamy, and maternal grandmother, Adrienne Lamy. His father, a stockbroker, committed suicide in 1930.

Malraux studied Oriental languages at the École des Langues Orientales but did not graduate. At the age of 21 he left for Cambodia with his new wife, Clara Goldschmidt, a German Jewish heiress whom he married in 1921 and divorced in 1946. (They had a daughter, Florence, born 1933, who married the filmmaker Alain Resnais.) In Cambodia he was arrested and almost imprisoned for trying to smuggle out a bas-relief from the Banteay Srei temple.

As a result of his experiences there, he became highly critical of the French colonial authorities in Indochina and in 1925 helped to organize the Young Annam League—he also founded the newspaper Indochina in Chains.

Did you know?
André Malraux won the Goncourt Prize for French literature for his novel "La Condition humaine" ("Man's Fate")

On his return to France he published his first novel, The Temptation of the West (1926). This was followed by The Conquerors (1928), The Royal Way (1930), and Man's Fate (1933). For the latter, a powerful novel about the defeat of a communist regime in Shanghai and the choices facing the losers, he won the 1933 Prix Goncourt of literature. Included in his non-published work is Mayrena, a novel about the eccentric French adventurer Marie-Charles David de Mayrena, conqueror of the highlands of Vietnam and first king of the Sedangs.

In the 1930s Malraux joined archeological expeditions to Iran and Afghanistan. He founded the International Association of Writers for the Defense of Culture with Louis Aragon.

During the Spanish Civil War Malraux served as a pilot for the Republican forces. His squadron gained something of the status of a legend after nearly annihilating part of the Nationalist army at Battle of the Sierra Guadalupe in Medellín. He was wounded twice during efforts to stop the Falangist takeover of Madrid. He toured the United States in an attempt to raise funds for the Republicans. A novel about his Spanish war experiences, Man's Hope, appeared in 1938.

World War II and after

At the outbreak of the Second World War Malraux joined the French Army and served in a tank unit. He was captured in 1940 during the Western Offensive but escaped and joined the French Resistance. He was again captured by the Gestapo in 1944 and although he underwent a mock execution, was rescued by members of the resistance. He ended up leading Brigade Alsace-Lorraine in defense of Strasbourg and in the takeover of Stuttgart. He was awarded the Médaille de la Résistance, the Croix de Guerre, and the British Distinguished Service Order.

He had two sons by Josette Clotis: Pierre-Gauthier (1940-1961) and Vincent (1943-1961). Josette was killed in an accident in 1944 while Malraux was fighting in Alsace, having slipped while boarding a train. Both their sons would die in a single automobile accident, seventeen years later.

Malraux met General Charles De Gaulle during the war; after it was over De Gaulle appointed Malraux as his minister of information (1945-1946), a post which he held for ten years. After the war, Malraux turned his back on fiction, preferring to focus on art and aesthetics. He developed the concept of the pan-cultural "Museum Without Walls" in such books as Voices of Silence. He again became minister for information in 1958, and France's first Minister of Culture from 1960 to 1969. During his term, he created the famous maisons de la culture throughout France, and worked to preserve national monuments.

In 1948 Malraux married Marie-Madeleine Lioux, a concert pianist and the widow of his half-brother, Roland Malraux. They separated in 1966.

Former First Lady Jacqueline Kennedy was one of his greatest admirers and held a dinner in his honor at the White House in 1961. The two became friends and would talk to each other only in French.

During the 1960s and 1970s, he wrote books about Pablo Picasso, whom he knew well, and Charles de Gaulle, as well as an autobiography (Antimemoires). During this time he also wrote an important series of works on art (La Métamorphose des dieux) in which he rejected the view that "art is beauty" and a "representation of the world," suggesting instead that "art is never essentially representation; it is the creation of another world ... a world that imposes unity and meaning on the fleeting world of the everyday."[1] Malraux also addressed the problem of how objects that were not originally created as art but have come to be seen as works of art in our time, for example religious images in ancient cultures, using the concept of "metamorphosis."[1] These writings were not well understood. As the French writer André Brincourt comments, Malraux's books on art have been "skimmed a lot but very little read."[2] As a result, critical commentary has often oversimplified and distorted their arguments.

Malraux's last political engagement was in support of Bangladesh in its 1971 secession from Pakistan.

According to his biographer, Olivier Todd (Malraux: A Life), André Malraux had Tourette syndrome. In 1974 he wrote a moving memoir, Lazarus, of one of his own final illnesses. He died in Paris on November 23, 1976.

Written in 1933, Malrux's La Condition humaine, or Man's Fate, is a novel about the failed communist revolution that took place in Shanghai in 1927, and the existential quandaries facing a diverse group of people associated with the revolution.

The novel takes place over a 21 day period mostly in Shanghai, China, and focuses on the lives of the socialist insurrectionists. The four protagonists are Ch’en Ta Erh (whose name is spelled Tchen in the French version of the book), Kyo Gisors, the Soviet emissary Katow, and Baron De Clappique. Their individual plights are intertwined throughout the book with the unfolding political events.

Chen Ta Erh is sent to assassinate an authority figure, succeeds, and is later killed in a failed suicide bombing attempt on Chiang Kai-shek. In between he becomes governed by fatalism, desiring simply to kill and fulfill his duty as a terrorist, which takes control of his life. Malraux is interested in the psychology of killing. He attributes his character's fatalism as a result of his proximity to death, and his response to becoming an assassin. He is so haunted by death and his powerlessness over its inevitability that he wishes to die simply and end his torment.

Kyo Gisors is the leader of the revolt who believes that every person should choose his own meaning, and be governed by no external forces. He makes every effort to keep the control of power in the hands of the workers rather than the Kuomintang army, while also struggling to resolve a conflict between himself and his wife, May. He is eventually captured and true to his philosophy, he chooses to take his own life with cyanide in a final act of self-definition.

Katow had faced execution once before, during the Russian Civil War, and was saved at the last moment—which gives him a feeling of psychological immunity. After witnessing Kyo's death, he watches with a kind of calm detachment as his fellow revolutionaries are taken out one by one, to be thrown alive into the chamber of a steam locomotive waiting outside—intending, when his own turn comes, to use his own cyanide capsule. But hearing two young Chinese activists talk with trembling fear of being burned alive, he gives them the cyanide (there is only enough for two), himself being left to face the more fearsome death—and so he dies in an act of self-sacrifice and solidarity with weaker comrades.

Baron De Clappique is a French merchant, smuggler, and obsessive gambler. He helps Kyo get a shipment of guns cut off, and is later told if he doesn’t leave the city in 48 hours he will be killed. On the way to warn Kyo he gets caught up gambling and cannot stop. He considers gambling “suicide without dying.” Clappique is very good-humored and cheerful but is inwardly suffering. He ends up escaping the city dressed as a sailor.

The major theme of the novel is the existential one of "man's fate" versus choosing one's own meaning. Malraux was heavily influenced by Fyodor Dostoevsky. Each of the main characters serves as a meditation on the relationship between being controled by both external circumstances or internal psychological compulsions on the one hand, and freely choosing one's actions. Ch'en succumbs to a fatalism brought on by the dehumanization of killing, while Kyo uses the circumstances of his capture to express an act of ultimate freedom. Katov also chooses freedom when he gives his cyanide pill to two other prisoners, thus accepting the fate of being burned alive himself, but saving the other two men from suffering.

Malraux received a number of honors and awards for his impressive collection of writings. In 1933 he received the Prix Goncourt French Literature award for La Condition Humaine.

His works on the theory of art, such as The Voices of Silence, contain a revolutionary approach to art that challenged the Enlightenment aesthetics tradition and views art as much more than a source of "aesthetic pleasure." His view opened a new way of appreciating and understanding art both from the modern world of art and the ancient world.[1]

In 1968, an international Malraux Society was founded in the United States. It produces the journal Revue André Malraux Review[3] Another society, the Amitiés internationales André Malraux, is based in Paris and promotes his works.