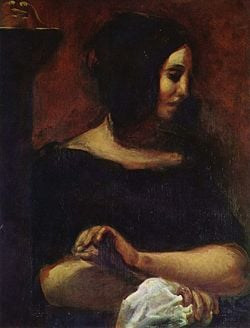 George Sand as portrayed by Eugène Delacroix in 1838. This portrait was originally part of a larger painting showing both George Sand and Frédéric Chopin.

George Sand was the pseudonym of the French novelist and feminist Amantine-Lucile-Aurore Dupin, later Baroness Dudevant (July 1, 1804 – June 8, 1876). Sand was an author of romance novels. The romance novel, as distinct from the ninteenth century tradition of Romanticism is one in which love conquers all, overcoming all barriers, including those of social class. In the traditional formula, two lovers face insurmountable obstacles which must be overcome in order to become one. The popularity of the romance novel played a role in the development of "romantic love" as the basis for marriage in Western culture. Her novels also expressed her love of the countryside.

Born in Paris to a father of aristocratic lineage (from a grandaughter of Maurice, comte de Saxe and a distant relative of Louis XVI) and a mother of common descent, Sand was raised for much of her childhood by her grandmother at the family estate, Nohant, in the French region of Berry, a setting later used in many of her novels. In 1822, she married Baron M. Casimir Dudevant (1795–1871), and they had two children, Maurice (1823–1889) and Solange (1828–1899).

Her first published novel, Rose et Blanche (1831) was written in collaboration with Jules Sandeau, from whom she allegedly took her pen name, Sand. Her reputation was questioned when she began sporting menswear in public—clothing far sturdier and less expensive than a noble woman's dress. This male "disguise" enabled Sand to circulate more freely about Paris, and gave her increased access to venues that might have been denied to a woman of her social standing. This was an exceptional practice for the 19th century, where social codes—especially in the upper class—were of the highest importance. As a consequence Sand lost many of the privileges attached to her status as a Baroness. (Ironically, the mores of this period allowed women of higher classes to live physically separated from their husbands without losing face, provided they did not show any blatant irregularity to the outer world.) She was linked romantically with Alfred de Musset (summer 1833–March 1834), Franz Liszt and Frédéric Chopin (1810-1849) whom she had met in Paris in 1831. Later in life, she corresponded with Gustave Flaubert; despite their obvious differences in temperament and aesthetic preference they eventually became close friends.

She was engaged in an intimate friendship with actress Marie Dorval, which led to widespread but unconfirmed rumors of a lesbian affair. [1].

In Majorca one can still visit the (then abandoned) Carthusian monastery of Valldemossa, where she spent the winter of 1838–1839 with Frédéric Chopin and her children. [2] This trip to Mallorca was described by her in Un Hiver à Majorque ("A Winter in Mallorca"), published in 1855.

She left Chopin shortly before he died from tuberculosis.

Further theatrical and autobiographical pieces include Histoire de ma vie (1855), Elle et Lui (1859) (about her affair with Musset), Journal Intime (posthumously published in 1926), and Correspondence. Sand often performed her theatrical works in her small private theatre at the Nohant estate.

In addition, Sand authored literary criticism and political texts. Her most widely used quote was: "There is only one happiness in life, to love and be loved." Also, she was one of the few female pipe smokers.

She was known well in far reaches of the world, and her social practices, her writings and her beliefs prompted much commentary, often by other luminaries in the world of arts and letters. A few excerpts demonstrate much of what was often said about George Sand:

"She was a thinking bosom and one who overpowered her young lovers, all Sybil — a Romantic." V.S. Pritchett (writer)

"What a brave man she was, and what a good woman." Ivan Turgenev (novelist)

George Sand died at Nohant, near Châteauroux, in the Indre département of France on June 8, 1876 at the age of 72 and was buried in the grounds of her home at Nohant. In 2004, controversial plans were suggested to move her remains to the Panthéon in Paris. 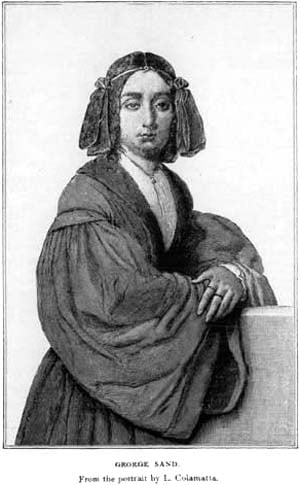 George Sand — From the portrait by Luigi Colamatta

Depiction in film and television

Retrieved from https://www.newworldencyclopedia.org/p/index.php?title=George_Sand&oldid=1056490
Categories:
Hidden category:
This page was last edited on 15 August 2021, at 16:34.
Content is available under Creative Commons Attribution/Share-Alike License; additional terms may apply. See Terms of Use for details.