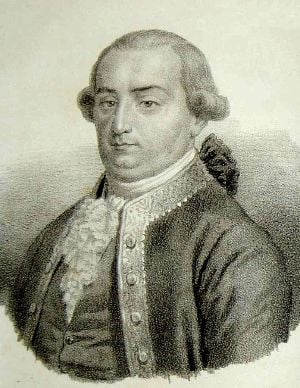 Cesare Beccaria or Caesar, Marchese Di Beccaria Bonesana (March 11, 1738 – November 28, 1794) was an Italian criminologist and economist. His work was significant in the development of Utilitarianism. Beccaria advocated swift punishment as the best form of deterrent to crime. His best known work was his treatise On Crimes and Punishments (1764), which condemned torture and the death penalty and was a pioneering study in the field of criminology. He argued that capital punishment was neither useful as a deterrent, nor was it necessary or ethically appropriate for the state to take the life of any of its citizens.

Beccaria's view of government was that it should work to prevent crime, rather than focus on punishment; and that effort spent on education and rewarding good behavior would reap better results and bring about greater happiness for all. His ideas, although not adopted in their entirety, were nonetheless highly influential in reforming European laws, and in forming the United States Constitution and American criminal justice system.

Cesare Beccaria was born in Milan, Italy, on March 11, 1738, into an aristocratic family. He was educated in the Jesuit college at Parma, where he showed a great aptitude for mathematics. His study of Baron de Montesquieu redirected his attention towards economics. He received his degree in 1758.

Beccaria’s first publication, in 1762, was a tract on the disorder of currency in the Milanese states, with a proposal for its remedy. It was in this period that Beccaria, in conjunction with his friends, the brothers Alessandro and Pietro Verri, as well as a number of other young men from the Milan aristocracy, formed a literary society named "L'Accademia dei pugni" (the Academy of Fists), a playful name that made fun of the stuffy academies which proliferated in Italy.

The Academy of Fists started an important cultural reformist movement centered around its journal Il Caffè, which ran from the summer of 1764 for about two years, and was inspired by Joseph Addison and Richard Steele's literary magazine, The Spectator. Il Caffè represented an entirely new cultural moment in northern Italy. With their Enlightenment rhetoric and their balance between topics of socio-political and literary interest, the anonymous contributors held the interest of the educated classes in Italy, introducing novel theories, such as that of Voltaire and Diderot.

In 1764 Beccaria, with a help from his friends from the Academy, published his greatest work On Crimes and Punishments. The Verri brothers, who had extensive knowledge of the penal system, persuaded Beccaria to write, and significantly contributed to the treatise. Fearing a political backlash, they published it anonymously, but when they realized its popularity—that even such great names as Katherine the Great, Maria Theresa, and Voltaire were praising it—they revealed Beccaria as being the author.

The book ensured Beccaria immediate fame. Within eighteen months, the book passed through six editions. It was translated into French in 1766 and published with an anonymous commentary by Voltaire himself. In the United States the book was read by all the luminaries of the day, including John Adams and Thomas Jefferson.

With the Verri brothers, Beccaria traveled to Paris, where he was given a very warm reception by the philosophes. He immediately realized, however, that he did not fit into the intellectual milieu of Paris’ avant-garde culture. He retreated in horror, returning to his young wife Teresa and never venturing abroad again. The break with the Verri brothers proved lasting; they were never able to understand why Beccaria had left his position at the peak of his success.

In November 1768, Beccaria was appointed to the chair of law and economics, founded expressly for him at the Palatine college of Milan. His lectures on political economy, which were based on strict utilitarian principles, were in marked accordance with the theories of the English school of economists. They are published in the collection of Italian writers on political economy (Scrittori Classici Italiani di Economia politica, vols. xi. and xii.). Beccaria never succeeded in producing a work to match On Crimes and Punishments, although he made various incomplete attempts in the course of his life. A short treatise on literary style was all he saw to press.

In 1771 Beccaria was made a member of the supreme economic council; and in 1791 he was appointed to the board for the reform of the judicial code, where he made a valuable contribution.

Beccaria died in his native Milan, in 1794. Beccaria’s daughter Giulia was the mother of Alessandro Manzoni, the noted Italian novelist and poet.

Beccaria’s On Crimes and Punishments marked the high point of the Milan Enlightenment. It put forth the first arguments ever made against the death penalty. Beccaria reflected the convictions of the Il Caffè group, who sought to cause reform through Enlightenment discourse. His treatise was also the first full work of penology, advocating reform of the criminal law system. The book tackled criminal reform and suggested that criminal justice should conform to rational principles.

The book's serious message is put across in a clear and animated style, based in particular upon a deep sense of humanity and of urgency at unjust suffering. This humane sentiment is what makes Beccaria call for rationality in the laws

The punishment of death is the war of a nation against a citizen whose destruction it judges to be necessary or useful" (On Crimes and Punishments, 1764).

He claimed that punishment has a purpose—to prevent crime from happening again. This utilitarian argument is what Beccaria elaborated the most and what finally proved persuasive. He argued that punishment can only be justified if it is useful for public good. Since the penal system so far had failed to deter criminals from committing crimes, it needed serious revision, claimed Beccaria.

He advocated that punishment needed to have a preventive deterrent, not a retributive, function. Based on that argument, the association between a crime and its punishment should be stronger. To achieve that, Beccaria proposed swift and prompt punishment. When a punishment quickly follows a crime, the link between the two grows stronger, which in turn should deter others from committing the same crime:

It is better to prevent crimes than to punish them. This is the fundamental principle of good legislation, which is the art of conducting men to the maximum of happiness, and to the minimum of misery, if we may apply this mathematical expression to the good and evil of life...." (On Crimes and Punishments, 1764).

Beccaria also argued against the severity of punishment, claiming that it is certainty, not severity, that has the preventive effect. He claimed that punishment should be proportionate to the crime committed, and that in order to be effective, punishment should be public. The best way to prevent crime, according to Beccaria, is to establish laws that are plain and simple. In addition, government should reward virtue and improve education.

Would you prevent crimes? Let the laws be clear and simple, let the entire force of the nation be united in their defense, let them be intended rather to favor every individual than any particular classes of men; let the laws be feared, and the laws only. The fear of the laws is salutary, but the fear of men is a fruitful and fatal source of crimes" {On Crimes and Punishments, 1764}.

Beccaria remains remembered as a father of classical criminal theory. Although he wrote only one major piece, his influence is enormous. On Crimes and Punishments had a significant impact on the American Constitution, the Bill of Rights, and the American criminal justice system. Many reforms in the penal codes of the principal European nations can be traced to Beccaria's treatise, although few contemporaries were convinced by Beccaria's argument against the death penalty. When the Grand Duchy of Tuscany abolished the death penalty, as the first nation in the world to do so, it followed Beccaria's argument about the lack of utility of capital punishment, not about the state's lacking the right to execute citizens.

Beccaria’s work greatly influenced Jeremy Bentham in his development of his doctrine of Utilitarianism.