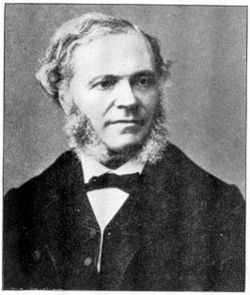 César-Auguste-Jean-Guillaume-Hubert Franck (December 10, 1822 – November 8, 1890), a composer, organist, and music teacher of Belgian origin, was one of the great figures in classical music in France (and the world) during the second half of the nineteenth century. Franck's skill and dedication to the musical organ led him to be a renowned and sought after performer in his own time. A gifted musician, as a young man, Franck gave up his father's wishes and the path of a virtuoso. From 25 years old, he spent his life teaching music and offering his talent in some of the finest churches and basilicas in Paris.

César Franck was born in Liège, Belgium. His father had ambitions for him to become a concert pianist, and he studied at the conservatoire in Liège before going to the Conservatoire de Paris, in 1837. Upon leaving in 1842, he briefly returned to Belgium, but went back to Paris in 1844, and remained there for the rest of his life. His decision to give up a career as a virtuoso led to strained relations with his father during this time.

During his first years in Paris, Franck made his living by teaching, both privately and institutionally. He also held various posts as an organist: From 1847-1851, he was the organist at Notre Dame de Lorette, and from 1851-1858, he was the organist at St. Jean-St. Francois. During this time he became familiar with the work of the famous French organ builder Aristide Cavaillé-Coll, and he also worked on developing his technique as an organist and improviser.

In 1858, he became the organist at the recently-consecrated Basilica of Sainte-Clotilde, where he remained until his death, 32 years later. Here he began to attract attention for his skill as an improviser. His first set of organ compositions, however, was not published until 1868, when he was 46 years old, though it contains one of his finest organ pieces, the Grande piece Symphonique. From 1872, he was professor of Organ at the Conservatoire de Paris. He held that position, in addition to his post at the basilica, for the rest of his life. His pupils included Vincent d'Indy, Ernest Chausson, Louis Vierne, and Henri Duparc. As an organist he was particularly noted for his skill in musical improvisation, and it is on the basis of only twelve major organ works that Franck is by many considered the greatest organ composer after Johann Sebastian Bach. His works were some of the finest organ pieces to come from France in over a century, and laid the groundwork for the French symphonic organ style. In particular, his Grande Piece Symphonique, a 25 minute work, paved the way for the organ symphonies of Widor, Louis Vierne, and Marcel Dupré.

Many of Franck's works employ a "cyclic form," a method of achieving unity among several movements in which all of the principal themes of the work are generated from a germinal motif. The main melodic subjects, thus interrelated, are then recapitulated in the final movement. His music is often contrapuntally complex, using a harmonic language that is prototypically late Romantic, showing a great deal of influence from Franz Liszt and Richard Wagner. In his compositions, Franck showed a talent and a penchant for frequent, graceful modulations to different keys. Often these modulation sequences, achieved through a pivot chord or through inflection of a melodic phrase, arrive at harmonically remote keys. Indeed, Franck's students reported that his most frequent admonition was to always "modulate, modulate." Franck's modulatory style and his idiomatic method of inflecting melodic phrases are among his most recognizable traits. The key to his music may be found in his personality. His friends recall that he was a man of utmost humility, simplicity, reverence and industry. Much of Franck's music is deeply serious and reverential in mood, often joyful, passionate, or mysterious, but almost never light-hearted or humorous.

Unusual for a composer of such importance and reputation, Franck's fame rests largely on a small number of compositions written in his later years, particularly his Symphony in D minor (1886-88), the Symphonic Variations for piano and orchestra (1885), the Prelude, Choral and Fugue for piano solo (1884), the Sonata for Violin and Piano in A major (1886), and the Piano Quintet in F sharp minor. The Symphony was especially admired and influential among the younger generation of French composers and was highly responsible for reinvigorating the French symphonic tradition after years of decline. One of his best known shorter works is the motet setting entitled, Panis Angelicus, which was originally written for tenor solo, but is more often heard in the soprano register these days.

In 1890, Franck was involved in a serious motor vehicle traffic accident. It was after this accident that he wrote three masterful Chorals for organ. Franck died as a result of complications from the accident very shortly after finishing the Chorals. He was interred in the Cimetière du Montparnasse in Paris.

Franck's organ works have been recorded, in whole or in part, by many famous organists, including Jean Langlais, Marie-Claire Alain, Jeanne Demessieux, Michael Murray, Daniel Roth, and Catherine Crozier. 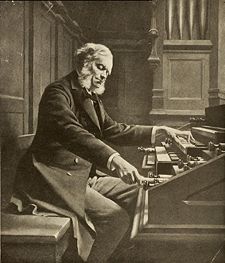 César Franck exerted significant influence on music. First of all, there was chamber music, which he helped to renew and reinvigorate, and then there was the principle of the cyclic form, which he developed and demonstrated in his music. Franck's influence was also due, in part, to his nature as "a man of utmost humility, simplicity, reverence and industry." Claude Debussy and Maurice Ravel remembered and employed the cyclic form, although their concepts of music were no longer the same as Franck's.

Sonata for violin and piano in A major

Variations symphoniques (for piano and orchestra)

Retrieved from https://www.newworldencyclopedia.org/p/index.php?title=Cesar_Franck&oldid=1002889
Categories:
Hidden category:
This page was last edited on 24 January 2017, at 17:08.
Content is available under Creative Commons Attribution/Share-Alike License; additional terms may apply. See Terms of Use for details.