Noel Kempff Mercado National Park is a national park in Bolivia located in the northeastern portion of the Santa Cruz Department. It is one of the most biologically diverse areas in the world. The park was created on June 28, 1979. Its original name was Parque Nacional Huanchaca, but it was changed to honor the late Professor Noel Kempff Mercado for his research and discoveries in the park.

The general objective behind the park's formation is to protect a natural area that was neither industrialized nor polluted. The isolation of its cerrado habitats provides an ideal living laboratory for the study of the evolving ecosystems. Specific goals of park management guarantee protection of the ecosystems, foster scientific research, while allowing visitors to enjoy its natural beauty, and help local residents improve their lifestyle.

Despite its natural beauty, lack of pollution, and isolation, the park still faces several ongoing threats. They including: Turtle hunting, fishing, human-made forest fires, illegal forest exploitation, drug trafficking and inadequate financing. In 1997, the government of Bolivia teamed with the Friends of Nature Foundation, the Nature Conservancy, and three energy companies to jointly implement the largest forest-based carbon project in the world. The 30-year project, was initiated to curb pollution and preserve the pristine lands of the park. It also serves to foster sustainable development in local communities. The project serves as a showcase for an innovative and cost-effective approach to abating greenhouse gas emissions.

Further protecting the park, in 2000 Noel Kempff Mercado National Park was designated a UNESCO World Heritage Site based upon its high diversity of plant and animal species, including viable populations of many globally threatened large animals. 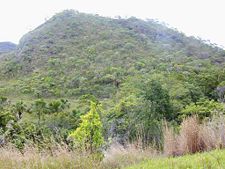 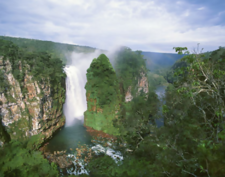 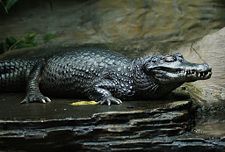 Black Caiman, common in the park.

The Noel Kempff Mercado National Park spans 5,880 square miles (15,234 km²) in northeastern Bolivia on the border with Brazil. Bolivia is known for its diversity in climate, fauna, and flora. In the area of Santa Cruz de la Sierra the weather is very humid and warm. The normal temperature is between 25 and 29°C (77°F - 84°F). The rainfall is roughly 1,500 mm annually.

The cerrado (English: "Closed" or "inaccessible") is a vast tropical savanna. The cerrado habitats found on the Huanchaca Plateau have been isolated for millions of years and thus contain a high diversity of plant and animal species, including viable populations of many globally threatened large vertebrates.

The cerrado landscape is crossed by gallery forests and stream valleys. Gallery forests are evergreen forests that form as corridors along rivers or wetlands and project into landscapes that are otherwise only sparsely treed such as savannas, grasslands, or deserts.

The savanna formations are not homogeneous. There is great variation between the amount of woody and herbaceous vegetation, forming a gradient from completely open "cerrado"—open fields dominated by grasses—to the closed, forest-like "cerrado" and the "cerradão" ("big cerrado"), a closed canopy forest. The trees have characteristic twisted trunks covered by a thick bark, and the leaves are usually broad and rigid. Many herbaceous plants have extensive roots to store water and nutrients. The plant's thick bark and roots serve as adaptations for the periodic fires that sweep the landscape. The adaptations protect the plants from destruction and make them capable of sprouting again after the fire. As in many savannas in the world, the "cerrado" ecosystems have been coexisting with fire since ancient times; initially as natural fires caused by lightning or volcanic activity, and later caused by peoples.

The great habitat variability in the different types of "cerrado" supports an enormous diversity of plant and animal species.

Gallery forests are able to exist where the surrounding landscape will not support forests for a number of reasons. The riparian zones in which they grow offer greater protection from fires that would kill tree seedlings. In addition the alluvial soils of the gallery habitat are often of higher fertility and better drainage than the soils of the surrounding landscape and have a more reliable water supply at depth. As a result, the boundary between gallery forest and the surrounding woodland or grassland is usually very abrupt.

The park includes a large section of the Huanchaca Plateau and surrounding lowlands. The plateau, 150 km long and 50 km wide, covers a total area of 6,800 square kilometers (2626 sq mi). The largest river in the area is the Iténez River, which marks the border with Brazil, to the north of the park. The park is part of the drainage system of the Iténez River Basin, which includes the sub-basins of the Verde, Paucerna, and Paraguá rivers. The Verde and Paucerna rivers have their origins on the plateau and their watercourses form beautiful falls such as the Fawcett, Federico Ahlfeld, and Arco Iris. The Paraguá River dominates the lowlands to the west. This river flows into the Iténez and in the rainy season it overflows large extensions of flooded forests and savanna wetlands. To the west of the plateau, and in the lowlands, there are three great fields that become flooded at varying levels during the rainy season, and several lagoons of different size.

It is estimated that the park has approximately 4,000 species of vascular plants. There exist diverse types of bromelias, passifloras, heliconias, aráceas, and palm trees.

There are also important types of wood like the "Mara." The area includes five important ecosystems ranging from Amazonian rainforest, gallery forest, and semi-deciduous tropical forest to flooded savanna and dry cerrado.

The park is home to more than 130 species of mammals, (including rare river otters, river dolphins, tapirs, spider and howler monkeys, the giant armadillo, giant anteaters, and endangered jaguars, including a population of black jaguars). There are also 620 species of birds (including 9 species of macaw, possibly the highest number of species in any one protected area), 74 species of reptiles, including black caiman and snakes, and 62 species of amphibians and fish.

The high population of birds accounts for 20 percent of the all bird species in South America). Recent studies say that these numbers would increase if migratory birds were included.

The park has 347 species of insects, including some of the rarest in the world, many of which have not yet been studied. Butterflies in a range of colors can be found. 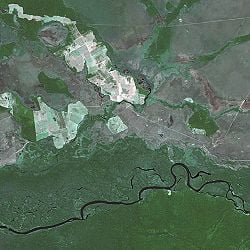 The goal is to protect nearly four million acres of threatened tropical forests in the Department of Santa Cruz, Bolivia, for at least 30 years. The primary purpose of the project is to sequester (capture) carbon dioxide and store carbon that would have been released as a result of logging activities in the area. At the same time, the project preserves one of the richest and most biologically diverse ecosystems in the world and fosters sustainable development in local communities. It could serve as a showcase for an innovative and cost-effective approach to abating greenhouse gas emissions.

The NKMCAP is projected to avoid emissions of 7-10 millions tons of carbon or 25-36 million tons of carbon dioxide during its 30-year life. Before it began in 1997, the park lands were under imminent threat of logging and conversion to agriculture. The project consists of numerous components: Park expansion and protection activities; ecotourism; sustainable development for local communities; a for-profit venture to generate revenues for the park (Canopy Botanicals); monitoring and verification activities; and support to the government of Bolivia’s climate change program.

The project includes several alternative economic development activities to assist local communities that live in and around the park. More than half the park rangers were hired locally. The project has established revolving loan funds for microenterprises, such as heart-of-palm plantings, agroforestry projects, animal husbandry, and small bakeries. In addition, the project has provided funding to enhance health care programs with a dedicated physician, emergency medical air service, purchase of an ambulance and radio system, and stocking of pharmacies with needed medicines; install potable water supplies and sanitation systems; improve schools; repair roads and bridges; and establish better communication systems. One of the most important activities funded by the project is technical and legal assistance to obtain title to land for the local indigenous people.

Accurately measuring and reporting the level of carbon dioxide captured as a result of the project is one of its most important components. Project participants can take credit only for carbon offsets that result from the avoidance, reduction, or mitigation of emissions that are additional to those that would have happened without the project. There is little doubt that without the project, logging would have continued on the property and much of the land would have been cleared.

The government of Bolivia is required to spend the proceeds from the sale of offset credits on park management activities in Noel Kempff and throughout Bolivia, and on other biodiversity-preservation activities.

Retrieved from https://www.newworldencyclopedia.org/p/index.php?title=Noel_Kempff_Mercado_National_Park&oldid=1087562
Categories:
Hidden category:
This page was last edited on 16 November 2022, at 02:35.
Content is available under Creative Commons Attribution/Share-Alike License; additional terms may apply. See Terms of Use for details.