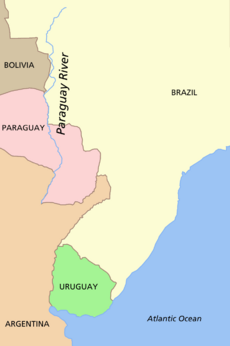 Map of the Paraguay River

The River Paraguay (Río Paraguay in Spanish, Rio Paraguai in Portuguese, and meaning “big mirror of waters” in the native Guaraní language) is the fifth largest river in South America, running through Brazil and Paraguay and running close to the border between Brazil and Bolivia as well as being the border between Paraguay and Argentina. It runs over a course of approximately 1,584 miles (2,549 kilometers) from its headwaters in the Brazilian state of Mato Grosso to its confluence with the Paraná River, of which it is the main tributary, just north of Corrientes.

The Pantanal, one of the most pristine and biologically rich environments on the planet, is contained within the Upper Paraguay River Basin.

The Paraguay River, which runs from north to south, divides the country of Paraguay into two very distinct regions. The Western Region, or what is called the Chaco-Boreal or Gran Chaco, is home to less than 5 percent of the population, yet covers about 60 percent of the country. It is an arid low plain marked with scrub woodlands and abundant wildlife including 60 known species of snakes. The Eastern Region, also known as the Paraneña or the Oriental Region, has a rainfall of 60 inches per year and is more fertile with exotic flowers, subtropical forests, rolling hills, and low mountains similar to the foothills of the Andes.

The Paraguay, along with the Paraná and Uruguay Rivers, form the second most important drainage system in the world which covers approximately 1.6 million square miles. These empty into the Rio de la Plata estuary at a rate of 2.8 million cubic feet of water per second, an outflow second only to that of the Amazon River. 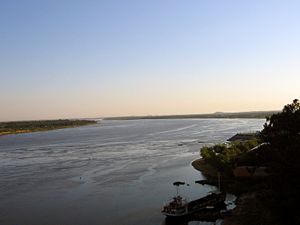 The Paraguay River near Asunción

The Paraguay River is born south of Diamantino in Mato Grosso, Brazil. It follows a generally southwesterly course, passing through the Brazilian city of Cáceres. It then turns in a generally southward direction, flowing through the Pantanal wetlands, the city of Corumbá, and then running close to the Brazil-Bolivia border for a short distance. The river runs close to the border but is actually located within the Brazilian side.

From the city of Puerto Bahia Negra, Paraguay, the river forms the border between Paraguay and Brazil, flowing almost due south for approximately 220 kilometers (137 miles) before its confluence with the Apa River.

The Paraguay River makes a long, gentle curve to the south-southeast before resuming a more south-southwest course, dividing the country of Paraguay into two distinct halves: The Gran Chaco region to the west, a largely uninhabited semi-arid region; and the eastern forested part of the country, accounting for some 98 percent of the country's inhabitants. As such the river is considered perhaps the key geographical feature of the country with which it shares its name.

Some 400 kilometers (249 miles) after flowing through the middle of Paraguay, at the confluence with the Pilcomayo River and passing the Paraguayan capital city, Asunción, the river forms the border with Argentina, flowing generally south-southwesterly for another 275 kilometers (171 miles) before it reaches its end, joining with the Paraná River. 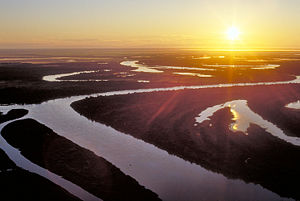 Sunrise over the Paraguay River

In 1526 and also in 1529, Sebastian Cabot sailed up the Paraná and Paraguay rivers while exploring Paraguay. For hundreds of years, these two rivers served as Paraguay’s main route to the outside world. A railroad running southeast out of Asunción was started in the 1830s, but not until 1913 was it finally connected to the rail system in Argentina.

Brazil's first inhabitants lived along the upper Paraguay River and its tributaries. They were Indians who spoke and still speak the Guaraní language (after Spanish, the second-most widely spoken language in Paraguay). The Pantanal in the Upper Paraguay River Basin is sparsely populated. In particular, the Bolivian and Paraguayan sides have very low population densities; they are virtually uninhabited. However, there are an estimated 1,000 members of an Indian group called the Bororo who speak a language of the Macro-Ge group of which there are two dialects: Bororo proper and Otuké. The Brazilian side, while more populated, also has a relatively low population density estimated at 30,000 to 300,000 inhabitants including native Indians.

The Guató, a tribe of nomads who once lived along the upper Paraguay River and throughout its tributaries in the Mato Grosso region of Brazil, were officially declared extinct twice. They spent nearly all of their time in dugout canoes, especially during flood season where they would keep a fire on soil within their canoe. They fished with arrows and spears and hunted mainly caiman, anaconda, deer, monkey, jaguar, and birds and gathered foods such as yatubá tree fruit, bananas, and wild rice. They have returned to their original habitat, living in a small part of the jungle and flooded plains area of the upper Paraguay River basin. 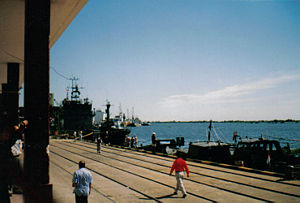 Deep-water port on the Paraguay River in Asunción, Paraguay

The Paraguay River is the second major river in the Río de la Plata watershed, covering a vast area of sparsely populated and underdeveloped land which includes major portions of northern Argentina, southern Brazil, Uruguay, parts of Bolivia, and the entire country of Paraguay. Unlike many of the other great rivers of the Paraná basin, the Paraguay has not been dammed for hydroelectric power generation, and as such it is navigable for a considerable distance, second only to the Amazon River in terms of navigable length on the continent. This makes it an important shipping and trade corridor used mainly for local traffic, providing a much needed link to the Atlantic Ocean for the otherwise landlocked nations of Paraguay and Bolivia. It serves such important cities as Asunción and Concepción in Paraguay and Formosa in Argentina.

The river is also a source of commerce in the form of fishing and providing irrigation for agriculture along its route. It also serves as a way of life for a number of poor fishermen who live along its banks and make the majority of their income selling fish in local markets, as well as supplying a major source of sustenance for their families. This has created issues in large cities such as Asunción, where poverty-stricken farmers from the country's interior have populated the river's banks in search of an easier lifestyle. Seasonal flooding of the river's banks forces many thousands of displaced residents to seek temporary shelter until the waters recede from their homes. The Paraguayan military has been forced to dedicate land on one of its reserves in the capital to emergency housing for these displaced citizens.

The Paraguay River is the primary waterway of the Pantanal wetlands which encompass southern Brazil, northern Paraguay, and parts of Bolivia. Although largely ignored by the international media in favor of more famous wetlands along the Amazon to the north, the Pantanal is actually the world's largest tropical wetlands ecosystem and is largely dependent upon waters provided by the Paraguay River. Owing to its importance as a navigable waterway serving Brazil, Argentina, and Paraguay, it has also been the focus of commercial and industrial development in those nations. 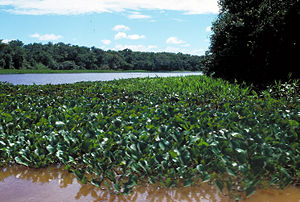 Lush growth in the Paraguay River 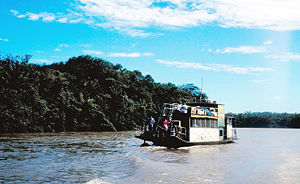 Traveling down the Paraguay River

For years, the four nations of Mercosur (Argentina, Brazil, Paraguay, and Uruguay) and their neighbor to the west, Bolivia, have been discussing the idea of an international waterway navigable from the Atlantic all the way to presently landlocked Bolivia. That dream moved closer to reality with a project called Hidrovia. The goal is to allow larger vessels to make the 2,000-mile trip from the ports in Buenos Aires and Montevideo to currently landlocked Paraguay and Bolivia. This would be accomplished by means of deepening and straightening the channels of the meandering river through dredging, rock removal, and channel restructuring. The Hidrovia Intergovernmental Commission (CIH) was created to oversee the development of this proposed year-round navigational waterway linking the five countries.

The project is considered to have extremely positive effects for Paraguay, Bolivia, western Brazil, and the north of Argentina, which presently rely on expensive overland transport. With this improved waterway system in place, the lower costs of transportation will make the regional industry more competitive in world markets, spur economic growth in the region, and create additional employment throughout the area. Paraguay’s capital city, Asunción, would become a major inland port benefiting exporters of cattle, cotton, and in particular, the soybean crop that the area has embraced. Argentina’s cereal producers near the Rosario port on the Paraná River would benefit from the lower transportation cost as well. Also, this project could trigger an economic boost to Brazil’s mining companies and farmers since the central plains are rich in iron, manganese, and precious stones and soybeans, coffee, wheat, rice, and hardwoods flourish. Uruguay’s aim is to develop Nueva Palmira at the southern end of the Hydrovia and establish it as the main port of the Southern Cone.

Ecologists from the five nations are opposed to the project. Studies indicate that the rechanneling of the Paraguay would dramatically lower the river levels, causing a devastating effect on the wildlife of the Pantanal wetlands. The water generated by heavy seasonal rains would flow downstream in far greater volume and speed than at present. The control mechanism of the Pantanal would be disrupted and water levels in the area would drop with devastating effect on the wildlife. Lowering the level of the river by only 25 cm (10 inches) on average would reduce the total flooded area of the Pantanal during its dry season by 22 percent. That is equivalent to two to three times the size of the remaining Florida Everglades. Environmentalists believe this project would devastate the river’s ecosystem, therefore impacting the livelihoods of many thousands of local indigenous people in the region who depend on the fish and biological resources of the Pantanal.

Although the studies indicated that this project of rechanneling the Paraguay River would have a devastating impact on the Pantanal wetlands, the member nations of the CIH were determined to go ahead with the plan. An effort by the Rios Vivos coalition to educate people on the effects of the project was successful in delaying the project, and the nations involved have agreed to reformulate their plan. The final plan is still uncertain, however, along with the final effect it will have on the Pantanal and the ecology of the entire Río de la Plata basin. The controversy as to whether or not the project will have a disastrous effect on the ecology, as well as the potential economic gains, continues to this day.