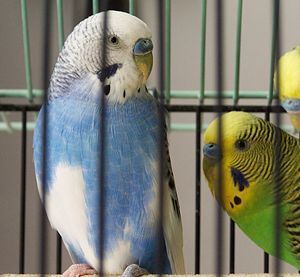 Parakeet is the common term for the members of more than 100 species of small, slender parrots scattered over more than a dozen genera in the subfamily Psittacinae of the family Psittacidae. Parakeets (or parrakeets) typically are characterized by a long, tapering tail, are seed-eating, and form flocks. Many species, such as the budgerigar (Melopsittacus undulatus), are popular as pets and kept in cages.

Parakeets add to the human wonder of nature, with their various colors, behaviors, sounds, and, for some species, ability to mimic human speech. Yet, human activities have not always been so beneficial for parakeets. The Carolina parakeet was the only parrot species native to the eastern United States, but became extinct in the early twentieth century due to a loss of habitat and overhunting.

Parrots or psittacines, comprise an order (Psittaciformes) of birds that includes about 350 species. Parrots usually are grouped into two families—the Cacatuidae (cockatoo), and the Psittacidae (parrots), but one may find many variations. In addition to birds called cockatoos and true parrots, the order includes birds with the common names of parakeets, lories, lorikeets, kakapos, rosellas, racquet-tails, lovebirds, macaws, and amazons, among others.

All members of the order have a generally erect stance and a characteristic curved beak shape with the upper mandible having slight mobility in the joint with the skull. All parrots are zygodactyl, with two toes at the front of each foot and two at the back, and all parrot eggs are white in color.

Parakeet is a term that encompasses diverse species, widely scattered taxonomically, within the subfamily Psittacinae of the family Psittacidae. The term mainly is used for small, long-tailed members of the Arini tribe in the Americas, and in Australia colloquially for many species. The term is descriptive and used for small, long-tailed parrots but does not imply an actual relationship between the different parakeets. Not all parakeets have long tails. An older orthography still sometimes encountered is paroquet.

Select genera and species of parakeets

The Carolina parakeet was the only parrot species native to the eastern United States. The last wild specimen was killed in Okeechobee County in Florida in 1904, and the last captive bird died at the Cincinnati Zoo in 1918. This was the male specimen "Incas," who died within a year of his mate "Lady Jane." It was not until 1939, however, that it was determined that the Carolina parakeet had ceased to be.

The Carolina parakeet died out because of a number of different threats, and in particular, a loss of habitat and overhunting. To make space for more agricultural land, large areas of forest were cut down, taking away its living space. The colorful feathers (green body, yellow head, and red around the bill) were in demand as decorations in ladies' hats, and the birds were kept as pets. Even though the birds bred easily in captivity, little was done by owners to increase the population of tamed birds. Finally, they were killed in large numbers because farmers considered them a pest, although many farmers valued them for controlling invasive cockleburs.

A factor that contributed to their extinction was the unfortunate flocking behavior that led them to return immediately to a location where some of the birds had just been killed. This led to even more being shot by hunters as they gathered about the wounded and dead members of the flock.

This combination of factors extirpated the species from most of its range until the early years of the twentieth century. However, the last populations were not much hunted for food or feathers, nor did the farmers in rural Florida consider them a pest as the benefit of the birds' love of cockleburs clearly outweighed the minor damage they did to the small-scale garden plots. The final extinction of the species is somewhat of a mystery, but the most likely cause seems to be that the birds succumbed to poultry disease, as suggested by the rapid disappearance of the last, small, but apparently healthy and reproducing flocks of these highly social birds. If this is true, the very fact that the Carolina parakeet finally was tolerated to roam in the vicinity of human settlements proved its undoing (Snyder and Russell 2002).