Cocoa is the dried and partially fermented fatty seed of the cacao tree from which chocolate is made. The word cocoa also is used to refer to cocoa powder, the dry powder made by grinding cocoa seeds and removing the cocoa butter from the dark, bitter cocoa solids. While the bean products are known by different names, typically, cocoa is considered the solids of the cacao seed (bean), cocoa butter is the fat component, and chocolate is the combination of the solids and the fat.

While the seed of the cocao tree is important for the plant's individual purpose of reproduction, it also advances a purpose for the ecosystem (food for various animals, albeit not cats and dogs) and a purpose for humans (cocoa, cocoa butter, chocolate). With a thousand flavor components and hundreds of chemicals that affect mood, soothe the mind, and stimulate the taste buds, cocoa and chocolate are among the most popular foods in the world.

In addition to it's widely enjoyed flavor, cocoa also has notable health benefits. Cocoa contains high levels of flavanoids that have been linked to cardiovascular health benefits. Additionally, cocoa appears to help reduce cholesterol. However, in certain animals, notably dogs, cocoa is often more detrimental than beneficial. Its has high level of xanthines and caffeine, which cannot be efficiently metabolized. These compounds can lead to cardiac and nervous system problems, and in high doses, death. However, recent efforts have created some cocoa derivatives with low concentrations of these compounds, and high concentrations of fiber and proteins, serving as healthy cocoa pet products.

Cacao (Theobroma cacao) is a small (4–8 meters tall) evergreen tree in the family Sterculiaceae (alternatively Malvaceae), native to the deep tropical region of the Americas. The bush today is found growing wild in the low foothills of the Andes at elevations of around 200–400 meters (650-1300 feet) in the Amazon and Orinoco river basins. It requires a humid climate with regular rainfall and good soil. It is an understory tree, growing best with some overhead shade. The leaves are alternate, entire, unlobed, 10–40 centimeters (4-16 inches) long and 5–20 cm (2-8 inches) broad.

The fruit, called a cacao pod, is ovoid, 15–30 centimeters (6-12 inches) long and 8–10 centimeters (3-4 inches) wide, ripening yellow to orange, and weighs about 500 grams (1 lb) when ripe. A cocoa pod has a rough leathery rind about 3 cm thick (this varies with the origin and variety of pod). It is filled with sweet, mucilaginous pulp called 'baba de cacao' in South America, enclosing 30 to 50 large almond-like seeds (usually called "beans") that are fairly soft and pinkish or purplish in color. Each seed contains a significant amount of fat (40–50 percent as cocoa butter). Their most noted active constituent is theobromine, a compound similar to caffeine. The beans have an intensely flavored bitter taste.

The pods are ready to harvest from the trunks and branches of the cocao tree when they are green, rather than red or orange. The harvested pods are then sliced open, separating the pulp and seeds, which are left to ferment. Finally, these fermented beans are set out to dry, preferably under the sun to avoid tainting the flavor. This yields the cocoa.

The bean products are known under different names in different parts of the world. In the American chocolate industry:

Chocolate, which is made from the fermented, roasted, and toasted beans, is the solid and the fat combination, sweetened with sugar and other ingredients, and it is that combination that is made into chocolate bars and is commonly referred to as chocolate by the public.

Cocoa may have originated in the Amazon in South America. It was an important commodity in Pre-Columbian Mesoamerica, as it was served as a prized delicacy to authorities and was used as currency before the Spanish conquests. Currently, cacao bushes will grow in a very limited geographical zone, of approximately 10 degrees to the north and south of the Equator. Now, nearly 70 percent of the world crop is grown in West Africa.

About 3,000,000 metric tons of cocoa are grown each year. The global production was

There are three main varieties of the Theobroma cacao: Forastero, Criollo, and Trinitario. The first comprises 95 percent of the world production of cacao, and is the most widely used. Overall, the highest quality of cacao comes from the Criollo variety and is considered a delicacy (Gambero Rosso 2001). However, Criollo is harder to produce, hence very few countries produce it, with the majority of production coming from Venezuela (Chuao and Porcelana). The Trinitario is a mix between Criollo and Forastero.

Cocoa and its products (including chocolate) are used worldwide. Belgium had the highest per-capita consumption at 5.5 kg in 1995/1996, 10 times the world average (FASonline 1997).

The Netherlands is the leading cocoa processing country, followed by the United States. 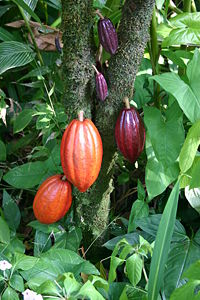 When the pods ripen, they are harvested from the trunks and branches of the cocoa tree with a curved knife on a long pole. The pod itself is green when ready to harvest, rather than red or orange. Normally, red or orange pods are considered of a lesser quality because their flavors and aromas are poorer; these are used for industrial chocolate. The pods are either opened on the field and the seeds extracted and carried to the fermentation area on the plantation, or the whole pods are taken to the fermentation area.

The harvested pods are opened with a machete, the pulp and cocoa seeds are removed and the rind is discarded. The pulp and seeds are then piled in heaps, placed in bins, or laid out on grates for several days. During this time, the seeds and pulp undergo "sweating," where the thick pulp liquifies as it ferments. The fermented pulp trickles away, leaving cocoa seeds behind to be collected. Sweating is important for the quality of the beans, which originally have a strong bitter taste. If sweating is interrupted, the resulting cocoa may be ruined; if underdone, the cocoa seed maintains a flavor similar to raw potatoes and becomes susceptible to mildew.

The liquified pulp is used by some cocoa producing countries to distill alcoholic spirits.

The fermented beans are dried by spreading them out over a large surface and constantly raking them. In large plantations, this is done on huge trays under the sun or by using artificial heat. Small plantations may dry their harvest on little trays or on cowhides. Finally, the beans are trodden and shuffled about, often using bare human feet. Sometimes, during this process, red clay mixed with water is sprinkled over the beans to obtain a finer color, polish, and protection against molds during shipment to factories in the United States, the Netherlands, United Kingdom, and other countries. Drying in the sun is preferable to drying by artificial means, as no extraneous flavors such as smoke or oil are introduced which might otherwise taint the flavor. 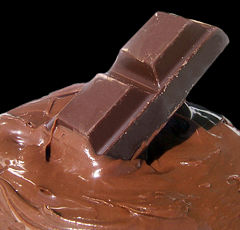 To make 1 kilogram (2.2 pounds) of chocolate, about 300 to 600 beans are processed, depending on the desired cocoa content. In a factory, the beans are washed and roasted. Next, they are de-hulled by a "nibber" machine that also removes the germ. The nibs are ground between three sets of stones into a thick creamy paste. This "liquor" is converted to cocoa powder by removing part of its fatty oils (the "cocoa butter") using a hydraulic press or the Broma process. This process produces around 50 percent cocoa butter and 50 percent cocoa powder. Standard cocoa powder has a fat content of approximately 10-12 percent. The extracted fatty oils are used in confectionery, soaps, and cosmetics.

Adding an alkali produces Dutch process cocoa powder, which is less acidic, darker, and more mellow in flavor than what is generally available in most of the world. Regular (nonalkalized) cocoa is acidic, so when added to an alkaline ingredient like baking soda, the two react and leave a byproduct.

The futures price of cocoa butter and cocoa powder is determined by multiplying the bean price by a ratio. The combined butter and powder ratio has tended to be around 3.5. If the combined ratio falls below around 3.2, production ceases to be economically viable and some factories cease extraction of butter and powder and trade exclusively in cocoa liquor.

Problems in the use of cocoa as a commodity

The cacao tree may have originated in the foothills of the Andes in the Amazon and Orinoco basins of South America where today, examples of wild cacao still can be found. However, it may have had a larger range in the past, evidence for which may be obscured because of its cultivation in these areas long before the Spanish arrived. It may have been introduced into Central America by the ancient Mayas, and cultivated in Mexico by the Toltecs and later by the Aztecs. It was a common currency throughout MesoAmerica and the Caribbean before the Spanish conquests.

Cocoa was an important commodity in Pre-Columbian Mesoamerica. Spanish chroniclers of the conquest of Mexico by Hernán Cortés relate that when Montezuma II, emperor of the Aztecs, dined he took no other beverage than chocolate, served in a golden goblet and eaten with a golden spoon. Flavored with vanilla and spices, his chocolate was whipped into a froth that dissolved in the mouth. No fewer than 50 pitchers of it were prepared for the emperor each day, and 2,000 more for nobles of his court.

Chocolate was introduced to Europe by the Spaniards and became a popular beverage by the mid-1500s. They also introduced the cacao bush into the West Indies and the Philippines.

The cacao plant was first given its botanical name by Swedish natural scientist Carl von Linné (1707-1778), who called it "Theobroma ("food of the gods") cacao."

Chocolate and cocoa contain a high level of flavonoids, specifically epicatechin, which may have beneficial cardiovascular effects on health. The ingestion of flavonol-rich cocoa is associated with acute elevation of circulating Nitrous oxide, enhanced flow-mediated vasodilation, and augmented microcirculation.

Prolonged intake of flavonol-rich cocoa has been linked to cardiovascular health benefits, though it should be noted that this refers to plain cocoa. Dark chocolate's addition of whole milk reduces the overall cocoa content per ounce while increasing saturated fat levels, possibly negating some of cocoa's heart-healthy potential benefits. Nevertheless, studies have still found short term benefits in LDL cholesterol levels from dark chocolate consumption (Roberts 2007).

As well, foods rich in cocoa have shown to reduce cholesterol (Science Daily 2007).

Chocolate is a food product with appeal not only to the human population, but to many different animals as well. However, chocolate and cocoa contain a high level of xanthines, specifically theobromine and to a much lesser extent caffeine, that are detrimental to the health of many animals, including dogs and cats. While these compounds have desirable effects in humans, they cannot be efficiently metabolized in many animals and can lead to cardiac and nervous system problems, and if consumed in high quantities, even lead to death. However, since the mid-2000s, some cocoa derivatives with a low concentration of xanthines, have been designed by specialized industry to be suitable for pet consumption, enabling the pet food industry to offer animal safe chocolate and cocoa flavored products. It results in products with a high concentration of fiber and proteins, while maintaining low concentrations of sugar and other carbohydrates, thus enabling it to be used to create healthy functional cocoa pet products.