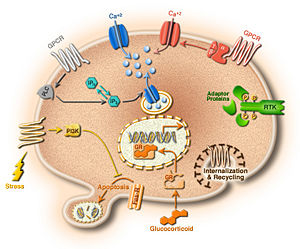 The object of cell biology, a cell is the structural and functional unit of all living organisms and is sometimes called the "building block of life" (Alberts 2002). Some organisms, such as bacteria, are unicellular, consisting of a single cell. Other organisms, such as humans, are multicellular.

Knowing the composition of cells and how cells work is fundamental to all of the biological sciences. Appreciating the similarities and differences between cell types is particularly important to the fields of cell and molecular biology. These fundamental similarities and differences provide a unifying theme, allowing the principles learned from studying one cell type to be extrapolated and generalized to other cell types.

Despite the diversity of living organisms (prokaryotic bacteria to elephant) and the diversity of cells (protozoa, human brain cell, ostrich egg, plant cell), cell biology has elucidated common principles that cells share. These similarities are numerous and fundamental. All cells share a common carbon-based biochemistry. All cells pass on their heredity via the genetic material that is based upon nucleic acids such as DNA using a nearly universal genetic code. Every cell, no matter how simple or complex, utilizes nucleic acids in manufacturing proteins. All cells utilize energy for maintenance, growth, and self-repair and use adenosine triphosphate (ATP) as the molecular currency of energy transfer. All cells are differentiated from their environment by a membrane of phospholipids in which are embedded thousands of protein molecules fulfilling the needs of sensory awareness and transport across the membrane.

Cell biology is done both on a microscopic and molecular level, and extends to both single-celled organisms and the many specialized cells in multicellular organisms.

Origins and development of cell biology

Cells were discovered in the middle of the seventeenth century. Robert Hooke, an Englishman, discovered cells in cork using an early microscope, and in 1665 he published a book entitled Micrographia with his observations. Hooke coined the biological term cell because his observations of plant cells reminded him of monks' cells which were called "cellula." He is often credited with the discovery of the cell, and although his microscope was very basic, research by British scientist Brian J. Ford has now shown that Hooke could have observed cork cells with it.

Over time, biologists discovered cells in a wide variety of plants and animals, as well as microorganisms, and identified key parts, such as the cell nucleus.

The cell doctrine arose in the 1830s and held that plants and animals are made up of cells and that cells are the common unit of structure. This major tenet of cell biology was first developed in 1839 by Matthias Jakob Schleiden and Theodor Schwann.

Chromosome behavior in animal (salamander) cells was later described in detail by German anatomist Walther Flemming, the discoverer of mitosis, in 1882.

Over time, a comprehensive cell theory was developed that included these doctrines: all organisms are composed of one or more cells; all cells come from preexisting cells; all vital functions of an organism occur within cells, and cells contain the hereditary information necessary for regulating cell functions and for transmitting information to the next generation of cells. This theory was somewhat modified near the end of the twentieth century and beginning of the twenty first as research revealed that the proteins floating in the cell membrane play a strategically significant role in the overall functioning of each cell. (Lipton, 2005)

In 1953, on February 28, Watson and Crick made their first announcement on the double-helix structure of DNA.

In 1981, Lynn Margulis published Symbiosis in Cell Evolution detailing the endosymbiotic theory that some cell organelles (mitochondria and chloroplasts) trace their origins to prokaryote organisms.

Another process studied is the movement of proteins. 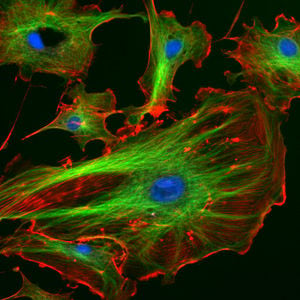 Proteins (red and green stain) at different locations in a cell.

Every cell typically contains hundreds of different kinds of macromolecules that function together to generate the behavior of the cell. Each type of protein is usually sent to a particular part of the cell. An important part of cell biology is investigation of molecular mechanisms by which proteins are moved to different places inside cells or secreted from cells.

Most proteins are synthesized by ribosomes in the cytoplasm. This process is also known as protein biosynthesis or simply protein translation.

Extracellular and cell surface proteins destined to be degraded can move back into intracellular compartments upon being incorporated into endocytosed vesicles. Some of these vesicles fuse with lysosomes where the proteins are broken down to their individual amino acids. The degradation of some membrane proteins begins while still at the cell surface when they are cleaved by secretases. Proteins that function in the cytoplasm are often degraded by proteasomes. 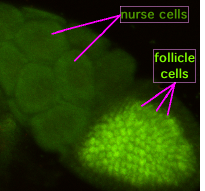 Some techniques used in cell biology include the following:

Purification of cells and their parts

Purification of cells and their parts is achieved in the following ways:

Some of the component structures of cells 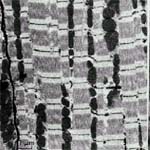 Retrieved from https://www.newworldencyclopedia.org/p/index.php?title=Cellular_biology&oldid=1092676
Categories:
Hidden category:
This page was last edited on 23 December 2022, at 14:54.
Content is available under Creative Commons Attribution/Share-Alike License; additional terms may apply. See Terms of Use for details.