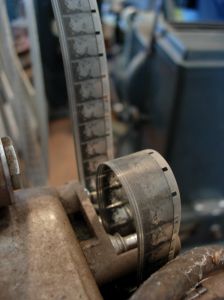 Celluloid film going through a projector.

Celluloid is the name of a class of compounds created from nitrocellulose (or cellulose nitrate) and camphor, plus dyes and other agents. Generally regarded as the first thermoplastic, it was first created in 1856. Celluloid is easily molded and shaped, and there are suggestions that it was initially made as an ivory replacement.

Celluloid is highly flammable and also easily decomposes, and is no longer widely used. Its most common use today is the table tennis ball.

A typical formulation of celluloid might contain roughly 70 to 80 parts nitrocellulose (cellulose nitrate) and 30 parts camphor. In addition, it may include 0 to 14 parts dye, 1 to 5 parts ethyl alcohol, and stabilizers and other agents to increase stability and reduce flammability.

Other nitrocellulose-based plastics slightly predated celluloid. In particular, collodion, invented in 1848, dried to a celluloid-like film. It was used as a wound dressing and emulsion for photographic plates.

Parkes patented it as a clothing waterproof for woven fabrics in the same year. Later, in 1862, Parkes showcased Parkesine at the Great Exhibition in London, where he was awarded a bronze medal for his efforts. Cellulose nitrate was dissolved in a small measure of solvent, then heated and rolled on a machine that extracted a proportion of the solvent. Finally, the use of pressure or dyes completed the manufacturing process. In 1866, Parkes tried again with his invention and created a company to manufacture and market Parkesine, but it failed in 1868, after trying to cut costs to enable further manufacture.

One year after Parkesine failed, Daniel Spill created the Xylonite Company, to design and market a product similar to Parkesine. It failed, and in 1874 Spill went bankrupt. Spill then reorganized and set up the Daniel Spill Company to continue production. He later pursued the Hyatt brothers over their patenting of celluloid.

In the 1860s, an American by the name of John Wesley Hyatt began experimenting with cellulose nitrate, with the intention of manufacturing billiard balls, which until that time were made from ivory. He used cloth, ivory dust, and shellac, and in 1869 patented a method of covering billiard balls with the important addition of collodion, forming the Albany Billiard Ball Company in Albany to manufacture the product. In 1870, John and his brother Isaiah patented a process of making a "horn-like material" with the inclusion of cellulose nitrate and camphor. Alexander Parkes and Spill listed camphor during their earlier experiments, but it was the Hyatt brothers who recognized the value of camphor and its use as a plasticizer for cellulose nitrate. Isaiah coined the commercially viable material “celluloid” in 1872 as a specifically Hyatt product.

English inventor Spill took exception to the Hyatt's claim and pursued the brothers in a number of court cases between 1877 and 1884. The outcome was that Spill held no claim to the Hyatts' patents and that the true inventor of celluloid was in fact Alexander Parkes, due to his mentioning of camphor in his earlier experiments and patents. The judge ruled that all manufacturing of celluloid could continue, including the Hyatts' Celluloid Manufacturing Company. Celluloid was later used as the base for photographic film.

The name celluloid actually began as a trademark of the Celluloid Manufacturing Company of Newark, New Jersey, which manufactured the celluloids patented by John Wesley Hyatt. Hyatt used heat and pressure to simplify the manufacturing of these compounds. The name was registered in 1870 but after a long court battle between Spill and the Hyatt brothers a judge later ruled that the true inventor of celluloid (by process, not name) was Alexander Parkes. 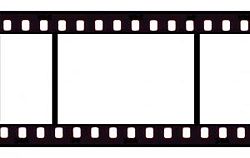 English photographer John Carbutt intended to sell gelatin dry plates when, in 1879, he founded the Keystone Dry Plate Works. The Celluloid Manufacturing Company was contracted for this work by means of thinly slicing layers out of celluloid blocks and then removing the slice marks with heated pressure plates. After this, the celluloid strips were coated with a photosensitive gelatin emulsion. It is not certain exactly how long it took for Carbutt to standardize his process, but it occurred no later than 1888. A 15-inch-wide sheet of Carbutt's film was used by William Dickson for the early Edison motion picture experiments on a cylinder drum Kinetograph. However, the celluloid film base produced by this means was still considered too stiff for the needs of motion-picture photography.

In the 1889, more flexible celluloids for photographic film were developed. Hannibal Goodwin and the Eastman Company both obtained patents for a film product; but Goodwin, and the interests he later sold his patents to, were eventually successful in a patent infringement suit against the Eastman Kodak Company. Nevertheless, the groundwork for these products was set for a photographic film, as opposed to a photographic plate, with all the implications that had for motion pictures.

As thermoplastics, celluloids found a wide variety of uses in the nineteenth century and the first half of the twentieth century. Items such as knife handles, fountain pen bodies, collars, cuffs, and toys were made from this material. It, however, burned easily and suffered from spontaneous decomposition. It was therefore largely replaced by cellulose acetate plastics and later polyethylenes by the mid-twentieth century. The use of celluloid for early film however has been problematic for film preservation.

Products still made from celluloid include the table tennis ball, and some musical instrument accessories and parts, such as guitar picks and pickguards. In addition, cured celluloid is used in luxury pens produced by OMAS and other high-end pen manufacturers.