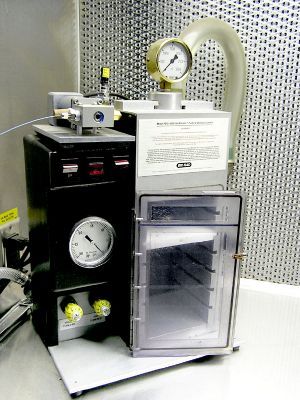 Broadly defined, transfection is the process of artificially introducing nucleic acids (DNA or RNA) into cells, utilizing means other than viral infection. Such introductions of foreign nucleic acid can result in a change of the properties of the cell.

Commonly, the term transfection is used in the sense of non-viral introductions of nucleic acid specifically into eukaryotic cells, or even more specifically into animal cells. The term transformation often is preferred to describe non-viral DNA transfer in bacteria and non-animal eukaryotic cells such as fungi, algae, and plants. However, the terms transfection and transformation have had varied meanings over time. Classically, the term transfection was used to refer to infecting a bacterial cell with viral DNA; however, the term has been expanded to include any artificial introduction of foreign nucleic acid into a cell. Transfection also has been used to refer to infecting a cell specifically with viral nucleic acid that is either isolated from a eukaryote virus or from a bacteriophage.

In transfection, the introduced nucleic acid may be transient, such that it does not replicate, or it may be stable and integrate into the genome of the recipient and replicate when the host genome replicates.

There are many methods employed in performing transfection. Transfection of animal cells typically involves opening transient pores or “holes” in the cell plasma membrane, to allow the uptake of material. Genetic material, such as sections of DNA coding for proteins, may be transfected. In addition to electroporation, transfection can be carried out using calcium phosphate, or by mixing a cationic lipid with the material to produce liposomes, which fuse with the cell plasma membrane and deposit their cargo inside.

The intent of a transfection is for the introduced DNA or RNA to be expressed. This process allows a variety of important applications, including the study of gene regulation, the analysis of the expression of proteins within eukarotic cells such as those of mammals, the production of transgenic organisms, and the methods of gene therapy.

The meaning of the term transfection has changed over time. Originally, the term was used for the artificial insertion of viral nucleic acid into bacterial cells, resulting in multiplication of mature viral particles (Dorland 2007). It also was used in the sense of "infection by transformation," in other words, introduction of DNA (or RNA) from an eukaryote virus or bacteriophage (a virus that infects bacteria) into cells, resulting in an infection. Because the term transformation had another sense in animal cell biology (a genetic change allowing long-term propagation in culture, or acquisition of properties typical of cancer cells), the term transfection acquired, for animal cells, its present meaning of a change in cell properties caused by introduction of nucleic acids by non-viral methods. It now includes any means of artificial introduction of foreign DNA into cells, or more specifically cultured eukaryotic cells. Weinberg et al. (1990) state that the meaning of transfection is "clear and unambiguous" and refers to the "process by which nucleic acid (DNA or RNA) is introduced to cells with the intent to be expressed in the recipient."

The transfection process is different from “infection,” which is the term used for a viral method of introducing nucleic acids into cells (Promega).

Separate terms are used for genetic alterations resulting from introduction of DNA by viruses ("transduction") or by cell-cell contact between bacteria ("conjugation").

For most applications of transfection, it is sufficient if the transfected gene is only transiently expressed. Since the DNA introduced in the transfection process is usually not inserted into the nuclear genome, the foreign DNA is lost at the later stage when the cells undergo mitosis.

If it is desired that the transfected gene actually remains in the genome of the cell and its daughter cells, a stable transfection must occur. To accomplish this, another gene is co-transfected, which gives the cell some selection advantage, such as resistance towards a certain toxin. Some (very few) of the transfected cells will, by chance, have inserted the foreign genetic material into their genome. If the toxin, towards which the co-transfected gene offers resistance, is then added to the cell culture, only those few cells with the foreign genes inserted into their genome will be able to proliferate, while other cells will die. After applying this selection pressure for some time, only the cells with a stable transfection remain and can be cultivated further.

A common agent for stable transfection is Geneticin, also known as G418, which is a toxin that can be neutralized by the product of the neomycin resistant gene.

Transfection allows a number of important applications. For example, the use of transfection allows the determination of what parts of a gene in a eukaryote are responsible for regulating its expression. The DNA sequences of the gene believed to be responsible for regulating its expression can be linked to a gene that has a function not normally present in a eukaryote cell, that is, a readily detectable marker. For example, the bacterial protein chloramphenicol acetyltransferase (CAT) is a commonly used marker enzyme. One can transfect cells in a culture and test for CAT enzyme activity. Most transfected cells will transiently express the foreign gene, and only a few will incorporate the gene permanently, but (as noted above) one can select those that have stably incorporated it (Alberts et al. 1989).

One can best test the function of an altered gene by reinserting it into an organism to test its effect. While ideally this would involve replacing the normal gene with an altered one, to analyze the function of the mutant protein, this is effectively done only in yeast. In mammalian cells, there is no way to control where the DNA becomes integrated into the chromosome, and only one in 1000 integrative events lead to gene replacement, and usually they become integrated randomly into a chromosome (Alberts et al. 1989).

Other applications of transfection include generating transgenic organisms, analyzing the function and expression of proteins within mammalian cells, and gene therapy strategies (Promega).

There are various methods of introducing foreign DNA into a eukaryotic cell. Many materials have been used as carriers for transfection, which can be divided into three kinds: (cationic) polymers, liposomes, and nanoparticles.

One of the cheapest (and least reliable) methods is transfection by calcium phosphate, originally discovered by F. L. Graham and A. J. van der Eb and reported on in 1973 (Graham and Eb 1973; Bacchetti and Graham 1977. HEPES-buffered saline solution (HeBS) containing phosphate ions is combined with a calcium chloride solution containing the DNA to be transfected. When the two are combined, a fine precipitate of the positively charged calcium and the negatively charged phosphate will form, binding the DNA to be transfected on its surface. The suspension of the precipitate is then added to the cells to be transfected (usually a cell culture grown in a monolayer). By a process not entirely understood, the cells take up some of the precipitate, and with it, the DNA.

Other methods use highly branched organic compounds, so-called dendrimers, to bind the DNA and get it into the cell. A very efficient method is the inclusion of the DNA to be transfected in liposomes, in other words, small, membrane-bounded bodies that are in some ways similar to the structure of a cell and can actually fuse with the cell membrane, releasing the DNA into the cell. For eukaryotic cells, lipid-cation based transfection is more typically used, because the cells are more sensitive.

Another method is the use of cationic polymers such as DEAE-dextran or polyethylenimine. The negatively charged DNA binds to the polycation and the complex is taken up by the cell via endocytosis.

A direct approach to transfection is the gene gun, where the DNA is coupled to a nanoparticle of an inert solid (commonly gold), which is then "shot" directly into the target cell's nucleus.

Of course, DNA also can be introduced into cells using viruses as a carrier; in such cases, the technique is called viral transduction, and, the cells are said to be transduced.

Transfection techniques can be broadly classified as chemical reagents and physical methods. Chemical reagents include such as DEAE-dextran and calcium phosphate. Physical methods include such as electroporation (perturbing the cell membrane by an electrical pulse, forming pores), direct microinjection, and biolistic particle delivery (high velocity delivery of nucleic acids).

Retrieved from https://www.newworldencyclopedia.org/p/index.php?title=Transfection&oldid=933494
Categories:
Hidden category:
This page was last edited on 22 February 2009, at 19:50.
Content is available under Creative Commons Attribution/Share-Alike License; additional terms may apply. See Terms of Use for details.