Sarin is a phosphorus-containing organic chemical, C4H10FO2P, that is extremely toxic to human beings and is used as a nerve agent, attacking the nervous system by irreversibly inhibiting cholinesterase. It is a colorless and odorless liquid at room temperature but is highly volatile, with the colorless and odorless gas used as a chemical weapon. Chemically known as 2-(Fluoro-methylphosphoryl)oxypropane or O-isopropyl methylphosphonofluoridate, sarin also is known by its NATO designation of GB.

Sarin is classified as a weapon of mass destruction by the United Nations in UN Resolution 687. It was developed by Nazi Germany during World War II and adopted by NATO in the early 1950s as a standard chemical weapon, with both the USSR and the United States producing it at that time for military purposes. More recently, sarin was used by Iraq against Iran in the Iran-Iraq War (1980-1988); used by Saddam Hussein, in 1988, against the Iraqi Kurdish town of Halabja, killing an estimated 5,000 people; used in 1995, by a Japanese religious sect, Aum ShinriKyo, killing twelve people and injuring thousands in a Tokyo subway; and used ineffectively, in 2004, by Iraqi insurgents against U.S. troops when the insurgents detonated a shell with sarin precursors. Production and stockpiling of sarin was outlawed by the Chemical Weapons Convention of 1993; the Chemical Weapons Convention officially took effect on April 29, 1997.

Sarin is one of diverse nerve agents (also referred to as nerve gases, though these chemicals are liquid at room temperature), which are a class of phosphorus-containing organic chemicals (organophosphates) that disrupt the mechanism by which nerves transfer messages to organs. The disruption is caused by blocking acetylcholinesterase, an enzyme that normally relaxes the activity of acetylcholine, a neurotransmitter. Other nerve agents are (tabun, soman, cyclosarin, VE, VG, VM, VR, VX, and Novichok agents.

Sarin is a fluorinated phosphonate and is similar in structure and has a similar mechanism of action as some commonly used insecticides, such as malathion. It is similar in biological activity to carbamates used as insecticides such as sevin, and medicines such as pyridostigmine, neostigmine, and physostigmine.

At room temperature, sarin is a colorless, odorless liquid. Its low vapor pressure (2.9 mmHg at 20°C) makes it relatively ineffective as a terrorist inhalation weapon. Its vapor is also colorless and odorless. It can be made more persistent through the addition of certain oils or petroleum products.

Sarin can be used as a binary chemical weapon (a chemical weapon in which the toxic agent is not contained within the weapon in its active state, but in the form of two less toxic chemical precursors, physically separated within the weapon, but which are mixed to make the active agent). Sarin's two precursors are methylphosphonyl difluoride and a mixture of isopropyl alcohol and isopropylamine. The isopropylamine neutralizes the hydrogen fluoride generated during the chemical reaction.

Sarin has a relatively short shelf life, and will degrade after a period of several weeks to several months. The shelf life may be greatly shortened by impurities in precursor materials. According to the CIA (1996), in 1989, the Iraqi Government destroyed 40 or more tons of sarin that had decomposed, and that some Iraqi sarin had a shelf life of only a few weeks, owing mostly to impure precursors.

Nations stockpiling sarin have tried to overcome the problem of its short shelf life in three ways. One way is to lengthen the shelf life of unitary (pure) sarin by increasing the purity of the precursor and intermediate chemicals and refining the production process. Another way to increase shelf life is by incorporating a stabilizer chemical. Initially used was tributylamine, but later this was replaced by diisopropylcarbodiimide (DIC), which allowed for sarin to be stored in aluminum casings. Finally, stockpiling of sarin can be improved by developing binary chemical weapons, where the two precursor chemicals are stored separately in the same shell, and mixed to form the agent immediately before or when the shell is in flight. This approach has the dual benefit of making the issue of shelf life irrelevant and greatly increasing the safety of sarin munitions. However, experts do not put the shelf life of this type of weapon past 5 years.

Like other nerve agents, sarin can be chemically deactivated with a strong alkali. Sodium hydroxide can be used in a hydrolysis reaction to destroy sarin, converting it to effectively harmless sodium salts (Housecroft and Sharpe 2001). 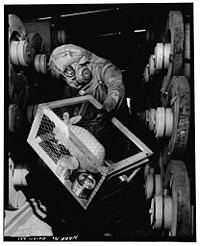 Like other nerve agents, sarin attacks the nervous system of a living organism. It is an extremely potent, irreversible cholinesterase inhibitor (Abu-Qare and Abou-Donia 2002).

Sarin disrupts the nervous system by inhibiting the cholinesterase enzyme by forming a covalent bond with the particular serine residue in the enzyme that forms the site where acetylcholine normally undergoes hydrolysis. The fluorine of the phosphonyl fluoride group reacts with the hydroxyl group on the serine side-chain, forming a phosphoester and releasing HF (Hornberg et al. 2007). With the enzyme inhibited, acetylcholine builds up in the synapse and continues to act so that any nerve impulses are, in effect, continually transmitted.

Initial symptoms following exposure to sarin are a runny nose, tightness in the chest, and constriction of the pupils. Soon after, the victim has difficulty breathing and experiences nausea and drooling. As the victim continues to lose control of bodily functions, the victim vomits, defecates, and urinates. This phase is followed by twitching and jerking. Ultimately, the victim becomes comatose and suffocates in a series of convulsive spasms.

Sarin has a high volatility relative to similar nerve agents. Inhalation and absorption through the skin pose a great threat. Even vapor concentrations immediately penetrate the skin. People who absorb a nonlethal dose but do not receive immediate appropriate medical treatment may suffer permanent neurological damage.

Even at very low concentrations, sarin can be fatal. Death may follow in one minute after direct ingestion of about 0.01 milligram per kilogram of body weight if antidotes, typically atropine and pralidoxime, are not quickly administered. Atropine, an antagonist to muscarinic acetylcholine receptors, is given to treat the physiological symptoms of poisoning. Since muscular response to acetylcholine is mediated through nicotinic acetylcholine receptors, atropine does not counteract the muscular symptoms. Pralidoxime can regenerate cholinesterases if administered within approximately five hours.

It is estimated that sarin is more than 500 times more toxic than cyanide (CFR 2006).

The short and long-term symptoms experienced by those affected included:

Although bleeding from the nose and mouth were symptoms seen in the 1995 sarin gas attacks in Tokyo, this had been attributed to impurities within the sarin used as it is not usually seen (Altman 1995).

Sarin was discovered in 1938, in Wuppertal-Elberfeld, Germany, by German scientists who initially were attempting to create stronger pesticides. It was named in honor of its discoverers: Gerhard Schrader, Ambros, Rüdiger, and Van der LINde.

The discovery of sarin came on the foundation of the discovery of the nerve agent tabun. Tabun was accidentally discovered in Germany on December 23, 1936, by a research team headed by Dr. Gerhard Schrader. Since 1934, Schrader had been in charge of a laboratory in Leverkusen to develop new types of insecticides for IG Farben. While working toward his goal of improved insecticide, Schrader experimented with numerous fluorine-containing compounds, eventually leading to the preparation of tabun.

In experiments, tabun was extremely potent against insects: As little as 5 ppm of tabun killed all the leaf lice he used in his initial experiment. In January 1937, Schrader observed the effects of nerve agents on human beings first-hand when a drop of tabun spilled onto a lab bench. Within minutes, he and his laboratory assistant began to experience miosis (constriction of the pupils of the eyes), dizziness, and severe shortness of breath. It took them three weeks to recover fully.

In 1935, the Nazi government had passed a decree that required all inventions of possible military significance to be reported to the Ministry of War, so in May of 1937, Schrader sent a sample of tabun to the chemical warfare (CW) section of the Army Weapons Office in Berlin-Spandau. Dr. Schrader was summoned to the Wehrmacht chemical lab in Berlin to give a demonstration, after which Schrader's patent application and all related research was classified. Colonel Rüdiger, head of the CW section, ordered the construction of new laboratories for the further investigation of tabun and other organophosphate compounds, and Schrader soon moved to a new laboratory at Wuppertal-Elberfeld in the Ruhr valley to continue his research in secret throughout World War II. The compound was initially codenamed Le-100 and later Trilon-83.

Sarin was discovered by Schrader and his team in 1938, and named after their initials. It was codenamed T-144 or Trilon-46. It was found to be more than ten times as potent as tabun. Sarin is the most toxic of the four G-agents made by Nazi Germany.

In mid-1939, the formula for the agent was passed to the chemical warfare section of the German Army Weapons Office, which ordered that it be brought into mass production for wartime use. A number of pilot plants were built, and a high-production facility was under construction (but was not finished) by the end of World War II. Estimates for total sarin production by Nazi Germany range from 500 kg to 10 tons.

Though sarin, tabun, and soman were incorporated into artillery shells, Germany ultimately decided not to use nerve agents against Allied targets. German intelligence was unaware that the Allies had not developed similar compounds, but did speculate that they might have and they also understood that unleashing these compounds would lead the Allies to develop and use chemical weapons of their own. They were concerned that the Allies' ability to reach German targets would prove devastating in a chemical war. 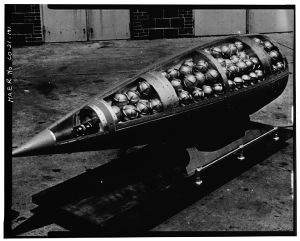 The following is a timetable of the development and use of sarin since World War II.

Retrieved from https://www.newworldencyclopedia.org/p/index.php?title=Sarin&oldid=786951
Categories:
Hidden category:
This page was last edited on 20 August 2008, at 15:49.
Content is available under Creative Commons Attribution/Share-Alike License; additional terms may apply. See Terms of Use for details.