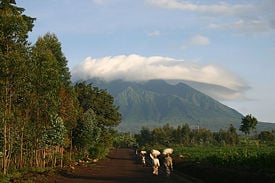 Rwanda is a small landlocked country in the Great Lakes region of east-central Africa. Its hilly terrain, which gives it the title "Land of a Thousand Hills," supports the densest population in sub-Saharan Africa. The country has a mostly mountainous landscape that includes the volcanic Virunga range in the northwest, home to what is estimated to be half of the world’s remaining mountain gorillas. Its once extensive forests are now concentrated in the western mountains and the Nyungwe forest, near Lake Kivu.

In 1978, the Wildlife Conservation Society began working in the nation, supporting studies of mountain gorilla ecology and the socio-economic context for conservation. From this sprang a program of mountain gorilla tourism which not only generates revenue and employment, but also helps protect the gorillas and their habitat. In the mid-1980s the organization expanded its focus to the Nyungwe Forest. The largest known mid-altitude forest of Africa, the area became a national park in 2004.[1]

Rwanda has three National parks: the Akagera, the Nyungwe Forest, and the Volcanoes, which were created in the spirit of conservation and preservation of the natural environment. 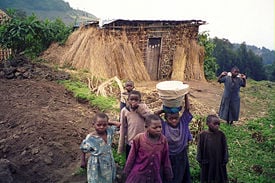 Children on a farm near Volcanoes National Park.

Volcanoes National Park (French: Parc National des Volcans) lies in the northwestern part of the country and borders Virunga National Park in the Democratic Republic of Congo and Mgahinga Gorilla National Park in Uganda. This national park is known as a haven for the mountain gorilla.

Volcanoes National Park is home to five of the eight volcanoes of the Virunga Mountains (Karisimbi, Bisoke, Muhabura, Gahinga and Sabyinyo), which are covered in rainforest and bamboo.

The park, which was the base for Dian Fossey, was the first established on the African continent, and is the smallest in Rwanda at 12,500 hectares (48 sq mi).

The park was first gazetted in 1925 as a small area bounded by Karisimbi, Visoke and Mikeno, intended to protect the gorillas from poaching. It was the first National Park to be created in Africa. Subsequently, in 1929, the borders of the park were extended further into Rwanda and into the Belgian Congo, to form the Albert National Park, a huge area of 8090 km², run by the Belgian colonial authorities who were in charge of both colonies at that time. [2]

After the Congo gained independence in 1960, the park was split into two, and upon Rwandan independence in 1962 the new government agreed to maintain the park as a conservation and tourist area, despite the fact that the new republic was already suffering from overpopulation problems. The park was halved in area in 1969.

The park later became the base for the famous American naturalist Dian Fossey to carry out her research into the gorillas. She arrived in 1967 and set up the Karisoke Research Centre between Karisimbi and Visoke. From that time on she spent most of her time in the park, and is widely credited with saving the gorillas from extinction by bringing their plight to the attention of the international community. She was murdered by unknown assailants at her home in 1985, a crime often attributed to the poachers she had spent her life fighting against.[2] Fossey's life later was portrayed on the big screen in the film Gorillas in the Mist, named after her autobiography. She is buried in the park in a grave close to the research center, and amongst the gorillas which had become her life work.

The Volcanoes National Park became a battlefield during the Rwandan Civil War, with the park headquarters being attacked in 1992. The research center was abandoned, and all tourist activities (including visiting the gorillas) were stopped. They did not resume again until 1999 when the area was deemed to be safe and under control. There have been occasional infiltrations by Rwandan rebels from the Democratic Forces for the Liberation of Rwanda in subsequent years, but these are always stopped quickly by the Rwandan army and there is thought to be no threat to tourism in the park. 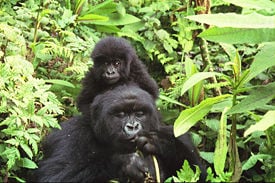 Vegetation varies considerably due to the large altitudinal range within the park. There is some lower montane forest (now mainly lost to agriculture). Between 2400 and 2500 m, there is Neoboutonia forest. From 2500 to 3200 m Arundinaria alpina (bamboo) forest occurs, covering about 30 percent of the park area. From 2600 to 3600 m, mainly on the more humid slopes in the south and west, is Hagenia-Hypericum forest, which covers about 30 percent of the park. This is one of the largest forests in Africa with Hagenia abyssinica. The vegetation from 3500 to 4200 m is characterized by Lobelia wollastonii, L. lanurensis, and Senecio erici-rosenii and covers about 25 percent of the park. From 4300 to 4500 m grassland occurs. Secondary thicket, meadows, marshes, swamps and small lakes also occur, but their total area is relatively small.

The park is best known for its population of Mountain Gorillas (Gorilla beringei beringei). Other mammals include: golden monkey (Cercopithecus mitis kandti), black-fronted duiker (Cephalophus niger), buffalo (Syncerus caffer), Spotted Hyena (Crocuta crocuta) and bushbuck (Tragelaphus scriptus). There are also reported to be some elephants in the park, though these are now very rare. There are 178 recorded bird species, with at least 13 species and 16 subspecies endemic to the Virunga and Ruwenzori Mountains.[3]

Tourism in the park

The Rwanda tourist board, ORTPN, runs several activities for tourists, including:[4]

The majority of revenue from tourism goes towards maintaining the park and conserving wildlife. The remainder goes to the government and approximately ten percent is contributed to projects in the area which benefit the local people. 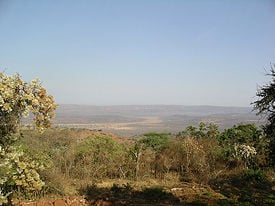 The Akagera National Park (French: Parc National de l'Akagera) is situated at lower altitudes in the northeast part of the country, on the Tanzanian border. It was founded in 1934 to protect animals in three ecoregions: savannah, mountain and swamp. The beautiful Lake Shakani and Lake Ihema are within the park's borders. Much of the savannah area of the park was settled in the late 1990s by former refugees returning after the end of the Rwandan Civil War, but the other regions remain relatively remote. Animals which fled during the upheavals are now returning. The park is named for the Kagera River which flows through it.

The Akagera covers 90,000 hectares (347.5 sq mi), making it the second largest national park in Rwanda. Founded in 1934, it was Rwanda's second national park to be established.

Akagera National Park, in contrast to much of the rest of the country, is dominated by swamps and lakes which follow the meandering course of the Akagera River, the most remote source of the Nile. The land within this park is considered archetypal African savannah landscape of tangled acacia woodland interspersed with open grassland.

Akagera is essentially big game country. There are herds of elephant, buffalo, giraffe, and zebra, along with leopards, spotted hyenas and lions. The park is home to more than a dozen types of antelope, most commonly the chestnut-coated impala, as well as the diminutive oribi and secretive bushbuck, the world's largest antelope, the eland and the ungainly tsessebe.

The park's waters are home to hippopotami - often gathered in pods of 50 or more - and crocodiles. There are a recorded 425 species of bird life. Some of Africa's densest concentrations of waterbirds along the park's shores, while the marshes provide habitat for a number of endangered species, such as the papyrus gonolek and the shoe-bill, the latter possibly the most eagerly sought of all African birds.[5] 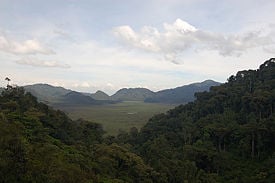 Nyungwe Forest National Park is the most recent of Rwanda's national parks, established in 2004. It is in the southwestern part of the country, located south of Lake Kivu on the border with Burundi. The park contains the largest block of montane forest in East or Central Africa, and one of the most ancient, dating back to before the last Ice Age.

With great floral diversity, the forest is home to more than 200 different types of trees and a myriad of flowering plants. Rainforest, bamboo, grassland, swamps, and bogs complete the area. Mount Bigugu is located within the park borders.

Nyungwe has a wide diversity of animal species, making it a priority for conservation in Africa. The forest is situated in a region where several large-scale biogeographical zones meet and the variety of terrestrial biomes provide a great span of microhabitats for many different species of plants and animals.

The park contains 13 different primate species (25 percent of Africa's total), 275 bird species, 1,068 plant species, 85 mammal species, 32 amphibian and 38 reptile species. Many of these animals are restricted-range species that are only found in the Albertine Rift ecoregion in Africa. In fact, the number of endemic species found here is greater than in any other forest in the Albertine Rift that has been surveyed.

Carnivores in the park include leopard, golden cat, serval cat, side stripped jackal, Genet, African civet, slender and marsh mongoose. There are three species of horned chameleons and 120 species of butterflies.

Retrieved from https://www.newworldencyclopedia.org/p/index.php?title=National_parks_of_Rwanda&oldid=1091925
Categories:
Hidden category:
This page was last edited on 19 December 2022, at 02:28.
Content is available under Creative Commons Attribution/Share-Alike License; additional terms may apply. See Terms of Use for details.