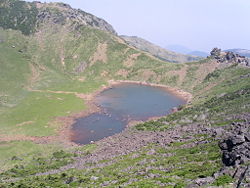 The Korean National Parks, like the National Treasures, provide a look at the heart and soul of Korea. The Parks host and protect many of South Korea's sacred, historical, and beautiful sites. From each of those perspectives, the Parks reveal the diversity of Korea. The Parks protect and present to the public the spirituality of ancient Buddhist sites throughout the nation. The natural beauty, the beauty of nation with much of the land in a mountainous and/or sea setting, has been protected and opened to the public. Although the National Park service has a short history of 40 years, already tremendous strides have been taken open Korean history, culture, and beauty to all.

The Park Service prohibits most forms of development in the system, cover a total of 6.6 percent of the country's area, typically located in mountainous or coastal regions. Jirisan National Park in the southwest, the country's largest mountain park, also holds the distinction of the first designated national park in 1967. Dadohae, the largest marine park, measures more than 2,200 km², almost all water. Wolchulsan sits at the bottom of the list for size with only 56.1 km².

People on an outing at Seoraksan 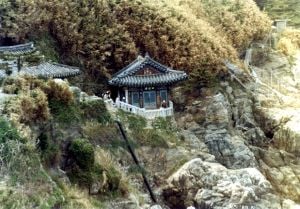 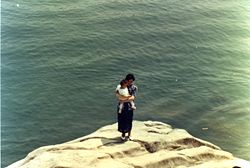 Retrieved from https://www.newworldencyclopedia.org/p/index.php?title=National_parks_of_South_Korea&oldid=1086937
Categories:
Hidden category:
This page was last edited on 11 November 2022, at 15:14.
Content is available under Creative Commons Attribution/Share-Alike License; additional terms may apply. See Terms of Use for details.