Pistachio is a common name for a small, deciduous tree, Pistacia vera, of western and central Asia, that produces a commercially popular "Pistachio nut." The term also is used for this edible "nut," which is really a greenish seed with a hard shell, enclosed within part of a fleshy fruit called a drupe. That is, it is a nut in the culinary sense, but not the botanical sense. The term pistachio also is used more broadly for any species of the genus Pistacia, a taxon of flowering plants generally placed in the cashew family Anacardiaceae, although sometimes placed in its own family, Pistaciaceae.

The pistachio plant has been known and appreciated for centuries as the source of a nut with a pleasing, delicate, and subtle flavor and high food value. It uniquely adds to the quality of human life not only in terms of nutrition, but also touching upon the inner desire for joy through its unique texture and taste and even through the artificially added colors often used in presenting the nut in shelled form.

Anacardiaceae is a family of 82 genera and over 700 species of flowering plants (Pell 2004). Some species produce the irritant urushiol. The type genus is Anacardium, the cashew, and it is generally known as the "cashew family." Other species included in this family are mango, poison ivy, sumac, smoke tree, and pistachio. Pistachio is sometimes placed in its own family, the Pistaciaceae.

Members of Anacardiaceae, including pistacio, bear fruits that are classified as drupes. A drupe is a fruit in which an outer fleshy part (exocarp, or skin; and mesocarp, or flesh) surrounds a shell (the pit or stone) of hardened endocarp with a seed inside. These fruits develop from a single carpel. The definitive characteristic of a drupe is that the hard, lignified stone (or pit) is derived from the ovary wall of the flower.

Pistacia is a genus of ten species in the family Anacardiaceae, native to the Canary Islands, northwest Africa, southern Europe, central and eastern Asia and southern North America (Mexico, Texas). The Pistacia genus has existed for about 80 million years (Parfitt and Badenes 1997). The ten extant species are small trees and shrubs, growing to 5 to 15 meters tall. The leaves are alternate, pinnately compound, and can be either evergreen or deciduous depending on species. 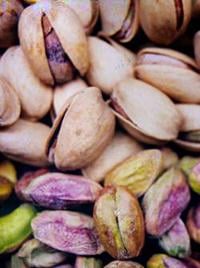 Pistachio nuts in and out of the shell

The most important commercial species is the pistachio, Pistacia vera, grown for its edible seeds. The seeds of the other species were also eaten in prehistory, but are considered to be too small to be worth eating today. The mastic, Pistacia lentiscus, is a shrub or small tree of the Mediterranean region with evergreen leaves. The resin mastic is obtained from it, and is often chewed by people in Turkey. Mastic resin is also used in varnishes and in medicine as a mild stimulant. The terebinth, Pistacia terebinthus, a native of the eastern Mediterranean countries, is tapped for turpentine. The Chinese pistache, Pistacia chinensis, is grown as an ornamental tree, valued for its bright red autumn leaf color; it is also the most frost-tolerant species in the genus.

Pistacia vera, known commonly as "pistachio," is a long-lived, relatively slowly growing tree that reaches up to ten meters tall and is native to mountainous regions of Iran, Turkmenistan, and western Afghanistan. It has deciduous pinnate leaves 10 to 20 centimeters long. The plants are dioecious, with separate male and female trees required to produce fruit. The flowers are apetalous and unisexual, and borne in panicles that may have more than 150 individual flowers. Flowers are wind-pollinated.

The drupaceous fruit contains an elongated seed with a hard, whitish shell and a striking kernel, which has a mauvish skin and pale green flesh. This seed, which has a distinctive flavor, is known commercially as a "pistachio" or a "pistachio nut." It is not a "nut" in a botanical sense, as this refers specifically to a simple dry fruit with one seed (rarely two) in which the ovary wall becomes very hard (stony or woody) at maturity—the seed remains unattached or unfused with the ovary wall. The pistachio nut is not a simple, dry fruit but rather is the edible seed of a thin-shelled drupe. It is known as a nut in the less restrictive culinary sense as the term can be applied in cuisine to any large, oily kernel found within a shell and used in food.

When the fruit ripens, the husk changes from green to an autumnal yellow/red and the shells split partially open (see photo). This is known as dehiscence, and happens with an audible pop. Each pistachio nut weighs around 1 gram (Nugent and Boniface 2005).

P. vera is often confused with some of the other nine species in the genus Pistacia, such as P. terebinthus and P. lentiscus. These species have a very different distribution, in the Mediterranean and southwest Asia, and have much smaller nuts, lacking the hard shell of P. vera. Their turpentine-flavored nuts were a popular food in antiquity. Finds of Pistacia from pre-classical archaeological sites, or references in pre-classical texts, always refer to one of these other species (often P. terebinthus).

Pistachio (in the sense of P. vera) was first cultivated in Western Asia. It reached the Mediterranean world by way of central Iran, where it has long been an important crop. Although known to the Romans, the pistachio nut appears not to have reached the Mediterranean or most of the Near East in any quantity before medieval times. More recently, pistachio has been cultivated in California (first commercial harvest in 1976) and Australia.

The word pistachio is a Persian loanword, coming into English through Italian, and is a cognate to the Modern Persian word پسته Peste'.

Pistachio trees (Pistacia vera) can begin to bear fruit after five to seven years, but often take up to 15 years before producing the nuts (Nugent and Boniface 2005). The trees are planted in orchards, and generally take seven to ten years to reach significant production. Production is alternate bearing or biennial bearing, meaning the harvest is heavier in alternate years. Peak production is reached at approximately 20 years. Each pistachio tree averages around 50 kilograms of nuts, or around 50,000, every two years (Nugent and Boniface 2005).

Trees are usually pruned to size to make the harvest easier. One male tree produces enough pollen for eight to 12 nut-bearing females. Pistachio orchards can be damaged by the fungal disease Botryosphaeria panicle and shoot blight, which kills the flowers and young shoots.

Pistachio trees are fairly hardy in the right conditions, and can survive temperature ranges between −10°C (14°F) in winter to 40°C (104°F) in summer. They need a sunny position and well-drained soil. Pistachio trees do poorly in conditions of high humidity, and are susceptible to root rot in winter if they get too much water and the soil is not sufficiently free draining. Long hot summers are required for proper ripening of the fruit.

As with other nuts of high oil content, pistachio nuts are highly flammable when stored in large quantities, and are prone to self heating and spontaneous combustion (GDV 2008).

California produces almost all United States pistachios, and about half of these are exported, mainly to China, Japan, Europe, and Canada. Almost all California pistachios are of the cultivar "Kerman." The tree is grafted to a rootstock when the rootstock is one-year-old. Only a few years after California growers started growing pistachios, the 1979 crisis in Iran gave stronger commercial impetus to the American-based pistachio nut industry.

Pistachio nuts have a high percentage of fat, which Nugent and Boniface (2005) puts at 53.7 percent for the edible seed, and Bender and Bender (2005) put at 30 percent when including the shells (with 10 percent of this saturated and 50 percent mono-unsaturated). The seed is a good source of protein (19 percent) and carbohydrate (19 percent), as well as vitamin A, thiamine, niacin, magnesium, potassium, calcium, and phosphorus (Nugent and Boniface 2005).

The pistachio may be purchased shelled or unshelled, and eaten raw or roasted and salted. They also are used to flavor both sweet and savory dishes, such as being used in ice cream and confections such as baklava, or in (Indian) hot, sweet, milk beverage (Bender and Bender 2005; Herbst 2001). On the Greek island of Chios, the husk or flesh of the pistachio fruit surrounding the shell is cooked and preserved in syrup. Herbst (2001) recommends when selecting shelled pistachios to make sure that the shells are partially opened, both for ease of removing the nutmeat and because closed shells indicate the nutmeat is immature.

Sometimes shells are colored red (or green) with a vegetable dye and sometimes blanched until white (Herbst 2001). The shell of the pistachio is naturally a beige color. Originally, the dye was applied by importers to hide stains on the shells caused when the nuts were picked by hand. However, most pistachios are now picked by machine and the shells remain unstained, making dyeing unnecessary. The California Pistachio Commission notes that they are dyed today both because that is the form most familiar to people and because they stand out in a bowl of nuts (Herbst 2001). Roasted pistachio nuts can be artificially turned red if they are marinated prior to roasting in a salt and strawberry marinade, or salt and citrus salts.

In July 2003, the Food and Drug Administration (FDA) of the United States approved the first qualified health claim specific to nuts lowering the risk of heart disease: "Scientific evidence suggests but does not prove that eating 1.5 ounces (42.5g) per day of most nuts, such as pistachios, as part of a diet low in saturated fat and cholesterol may reduce the risk of heart disease" (FDA 2003). In research at Pennsylvania State University, pistachios in particular significantly reduced levels of LDL, the "bad" cholesterol, in the blood of volunteers (Daily Telegraph 2007). Pennsylvania State University's Department of Nutrition and Sciences has also conducted related research on other health benefits of pistachios, including an April 2007 study concluding that pistachios may calm acute stress reaction (PSU 2007), and a June 2007 study on the cardiovascular health benefits of eating pistachios (Gebauer 2007).