Piranha, or piraña, is the common name for various South American, freshwater, tropical fish of the order Charciformes known for their pointed, razor-sharp teeth in a pronounced underbite and an aggressive appetite for meat and flesh. Traditionally, piranhas have been classified together with the pacus and silver dollars (Metynnis sp.) in the Serrasalminae subfamily of the characin family (Characidae) (Nelson 1994). However, some recent taxonomies place these three groups in their own family, the Serrasalmidae. In Venezuelan rivers, piranhas are called caribes. Some species appear to be omnivorous, consuming some vegetable matter at some stage in their lives.

While piranhas tend to be voraciously feeding, schooling fish, their reputation as a threat to human beings or their livestock generally is largely overstated. Local children swim in South American rivers inhabited by piranha. For most people, the greatest danger from their teeth is when trying to remove one from a fishing hook. Nonetheless, the unique form and behavior of piranhas add to the wonder of nature for people. Beyond this, they have important ecological roles in food chains, preying upon fish, while being consumed by larger fish, birds, caimans, and mammals such as river otters. For humans, piranhas are consumed as a food fish and sometimes kept as aquarium pets.

Traditionally, piranhas, pacus, and silver dollars comprised the Serrasalminae subfamily of the Characidae family (Nelson 1994). Characidae is a large and diverse family of freshwater subtropical and tropical fish, belonging to the Order Characiformes. Known as characins, members of this family are found in Central and South America, southern North America, and Africa. As characiformes, they are characterized by well developed teeth (most are carnivores) and the presence of a pelvic fin (with five to twelve rays) and normally an adipose fin, and a body that is almost always scaled (Nelson 1994). The characins are distinguished from other fish by the presence of a small adipose fin between the dorsal fin and caudal fin, although the adipose fin is not always present in every species.

However, this Characidae family has undergone much taxonomic revision. While the larger piranhas, pacus, and silver dollars have historically been placed in this family, some authorities now place them in their own related family, the Serrasalmidae (Freeman et al. 2007). This reassignment has yet to enjoy universal acceptance, but is gaining in popularity among taxonomists working with these fishes. Ultimately, classifications can be rather arbitrary (Magallanes 2006).

The related pacus are mainly herbivores, but will also eat small fish, crabs, insects, and meat on fishing lures. Pacu and piranha are distinguished from each other by their teeth and jaw alignments. In a general sense, piranha have pointed, razor-sharp teeth in a pronounced underbite, whereas pacu have square, straight teeth in a less severe underbite, or a slight overbite (Lucariello 2006). Additionally, full-grown pacu are much larger than piranha.

Traditionally, only the four genera Pristobrycon, Pygocentrus, Pygopristis, and Serrasalmus are considered to be true piranhas, due to their specialized teeth. However, a recent analysis showed that, if the piranha group is to be monophyletic, it either should be restricted to Serrasalmus, Pygocentrus, and part of Pristobrycon, or expanded to include these taxa, plus Pygopristis, Catoprion, and Pristobrycon striolatus. Pygopristis was found to be more closely related to Catoprion than the other three piranha genera (Freeman et al. 2007).

The wimple piranha, Catoprion, is not traditionally considered to be a true piranha; the shape of its teeth and the presence of two rows of teeth (instead of one) on the upper jaw make it different from the other piranha genera. However, as noted above, molecular analysis has suggested that this species should be included in the true piranha group if the piranha group is to be monophyletic.

The number of piranha species is about 24, and new species continue to be described. In 1988, it was stated that fewer than half of the approximately 60 nominal species of piranhas at the time were valid. More recently, in 2003, one author recognized a total of 38 or 39 species, although the validity of some taxa remains questionable (Freeman et al. 2007). 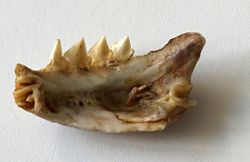 Serrasalminae or Serrasalminidae means "serrated salmon family" or "saw salmon family," and is a name that refers to the serrated keel running along the belly of piranhas (and pacus) in this family.

Piranhas are normally about 15 to 25 centimeters long (6 to 10 [[inches), although reportedly individuals have been found up to 41 centimeters (24 inches) in length PZ 2007).

Serrasalmus, Pristobrycon, Pygocentrus, and Pygopristis are most easily recognized by their unique dentition. All piranhas have a single row of sharp teeth in both jaws; the teeth are tightly packed and interlocking brains (via small cusps) and used for rapid puncture and shearing. Individual teeth are typically broadly triangular, pointed, and blade-like (flat in profile). There is minor variation in the number of cusps; in most species the teeth are tricuspid with a larger middle cusp that makes the individual teeth appear markedly triangular. The exception is Pygopristis, which has pentacuspid teeth and a middle cusp that is usually only slightly larger than the other cusps.

In the scale-eating Catoprion, the wimple piranha, the shape of their teeth is markedly different and the premaxillary teeth are in two rows, as in most other serrasalmines (Freeman et al. 2007).

The pointed, razor-sharp teeth of piranhas are in a pronounced underbite.

Piranhas are found only in the Amazon basin, in the Orinoco, in rivers of the Guyanas, in the Paraguay-Paraná river basins (such as the Pantanal), and in the São Francisco River systems.

Some species of piranha have extremely broad geographic ranges, occurring in more than one of the major basins mentioned above, whereas others appear to have much more limited distributions (Freeman et al. 2007). However, piranha (inevitably former aquarium-dwellers) have been introduced into parts of the United States, even being occasionally found in the Potomac River, but they typically do not survive the cold winters of that region (Fahrenthold 2005).

Ecologically, piranhas are important components of their native environments. Although largely restricted to lowland drainages, these fishes are widespread and inhabit diverse habitats within both lotic and lentic environments. Some piranha species are abundant locally and multiple species often occur together (Freeman et al. 2007).

As both predators and scavengers, piranhas influence the local distribution and composition of fish assemblages (Freeman et al. 2007). Certain piranha species consume large quantities of seeds, but unlike the related Colossoma and Piaractus, herbivorous piranhas tend to thoroughly masticate and destroy all seeds eaten and consequently do not function as dispersers (Freeman et al. 2007).

The piranha is renowned and portrayed as a vicious species of fish, hunting in large schools. This conception was created from the past belief that piranhas created schools for hunting purposes. Recent research, however, suggests that this is actually used as a defense mechanism against the piranha's natural predators, such as river dolphins, caimans, and giant pirarucu (Edward 2007).

Recent research on Serrasalmus aff. brandtii and Pygocentrus nattereri in Viana Lake, which is formed during the wet season when the Rio Pindare (a tributary of the Rio Mearim) floods, has shown that these species eat vegetable matter at some stages in their life; they are not strictly carnivorous fish (Clarke 2005). 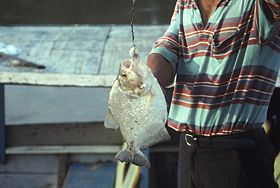 Fishing piranha on the Ucayali river.

Piranha are a popular food in areas in which they inhabit. Some of its popularity may be attributed to its mythical reputation as an aphrodisiac and cure for problems dealing with fertility, virility, and even baldness (Lyman 1998). Locals also use piranha teeth in tools and weapons. In recent decades, dried specimens have been marketed as tourist souvenirs.

Piranhas occasionally bite and sometimes injure bathers and swimmers, but truly serious attacks are rare and the threat to humans has been largely exaggerated (Freeman et al. 2007). However, piranhas are a considerable nuisance to commercial and sport fishers because they steal bait, mutilate catch, damage nets and other gear, and may bite when handled (Freeman et al. 2007).

A few piranha species appear in the aquarium trade (Freeman et al. 2007). Piranhas can be purchased as pets in some areas; however, they are illegal in some parts of the United States, such as the State of Washington (Magallanes 2007). The most common piranha is the Pygocentrus nattereri, or the red-bellied piranha. Piranhas can be bought fully grown or as babies, often no bigger than a thumbnail. It is important to keep Pygocentrus piranhas either singularly or in groups of three or more, rather than simply pairs, since aggression among the group is common and distributed more widely when kept in larger groups, allowing the weaker fish to survive. While any fish-based foods are adequate for feeding, thawed shrimp, fillets of white fish, and disease free feeders are preferred. The young are to be fed very little, as overfeeding can kill them. Blood worms, or insect larvae are a good choice of food, as they are full of protein. If underfed, piranhas are likely to fill their stomach with one of their own if kept in groups. They will eat more as they grow older and larger. In order to provide a balanced diet, it is usually necessary to change types of food often. Feeder goldfish are a popular choice for feeding piranhas, although they contain a B vitamin inhibitor that may stunt growth and shorten the fish's life span. It is recommended to feed them with feeder goldfish as a treat, once in a while, rather than basing their diet only on that. Piranhas prefer a darker environment with a lot of plant cover, as they become agitated when denied appropriate cover.