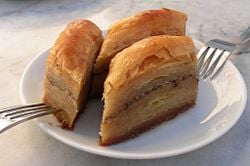 Baklava or baklawa is a rich, sweet pastry featured in many cuisines of the former Ottoman countries. It is made of layers of phyllo dough filled with chopped nuts, such as walnuts, almonds, or pistachios, and sweetened with syrup or honey. The result is a dish so delicious that not only was it served to royalty but numerous ethnic groups claim it as their own. Baklava is an example of human ingenuity in developing food that not only nourishes the body, but also brings happiness to the mind and spirit.

Commonly regarded as a Greek specialty, baklava is available in a wide range of local variations throughout Greece, both mainland and islands. It is also widely found in Turkish and many Arabic and Middle Eastern cultures. Baklava is generally served on special occasions, in many areas during religious ceremonies. Thus, Christians serve baklava at Christmas and Easter, Muslims eat it during Ramadan, and Jews often enjoy it as a Rosh Hashannah and Purim treat. 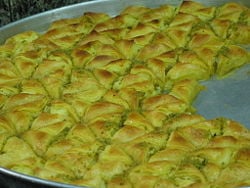 Baklava is prepared on large trays and cut into a variety of shapes.

Baklava is basically layers of crisp phyllo dough (paper-thin sheets of raw, unleavened flour dough used for making pastries) alternated with a sugary spiced nut mixture, which includes walnuts, almonds, and possibly pistachios. The pastry is prepared on large trays, and melted shortening is poured on top. After baking, the whole thing is soaked in fragrant sweet syrup made with honey, lemon, and cinnamon. Sweet and exotic, baklava is cut into small pieces of various shapes (triangles, squares, or diamonds) and cooled before serving. 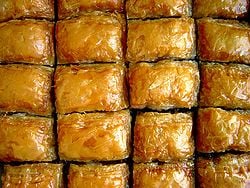 The word "baklava" entered English from Turkish, although the dish is often thought to be of Greek origin. The history of baklava is not well-documented; but although it has been claimed by many ethnic groups, the best evidence is that it is of Central Asian Turkic origin.[1] The version known and used today was probably developed in the kitchens of the Topkapi Palace. Indeed, the sultan presented trays of baklava to the Janissaries every 15th of Ramadan in a ceremonial procession called the Baklava Alayı.[2]

One of the oldest known recipes for a sort of proto-baklava is found in a Chinese cookbook written in 1330 under the Yuan (Mongol) dynasty under the name güllach.[3] "Güllaç" is also found in Turkish cuisine. Layers of phyllo dough are put one by one in warmed up milk with sugar. It is served with walnut and fresh pomegranate and generally eaten during Ramadan.

An ancient recipe from the Greek island of Crete for Gastrin (in Greek: γάστριν) is quite similar to modern baklava. Sesame seeds, pepper, and poppy seeds are only some of the unusual ingredients in this ancient recipe. Petimezi (a sweetener made from grapes), used long before sugar arrived in Greece, adds to its unique taste. 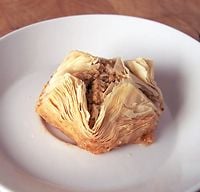 The Greek's major contribution to baklava was the creation of the dough technique that allowed it to be rolled as thin as a leaf, rather than the rougher, bread-like texture of the Assyrian dough. The name "phyllo" comes from Greek language, meaning "leaf."

The phyllo dough was then given a French touch in the late eighteenth century, when a former pastry chef of Marie Antoinette, in exile at the Ottoman Turkish palace, created the "dome" technique of cutting and folding baklava squares. 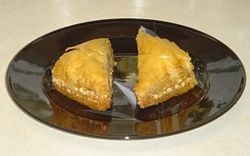 A typical baklava, sweetened with syrup.

As a sweet, rich dish that requires time and expense in its preparation, baklava has generally been regarded in Greece as a dish reserved for special occasions. In some areas, baklava is the most important sweet served at weddings, and is even taken to the church before the ceremony. In many regions it is served at Christian celebrations such as Christmas, and at Easter when it is made with 40 sheets of phyllo dough representing the 40 days of Lent.

Balkava has become a traditional Middle Eastern Rosh Hashannah and Purim treat but is also enjoyed at celebrations throughout the year. Sephardim refrain from serving dark-colored pastries, such as those made from walnuts, on Rosh Hashannah, as that would portend a dark year. Blanched almonds are traditionally used in Rosh Hashannah baklava to produce a light color so that the year should be "sweet and bright."[4]

The origin of baklava has continued to be disputed, since many ethnic groups claim this delicious, exotic dish as their own. Baklava was chosen to represent Cyprus in the presentation Sweet Europe of the cultural initiative Café Europe in 2006. This led to a "baklava war" proclaiming "Baklava is Turkish, we will not allow the Greek Cypriots to feed it to the world."[5]

Gaziantep, a city in Turkey, is famous for its baklava and, in Turkey, is widely regarded as the native city of the dessert.[6] In 2008, the Turkish patent office registered a geographical indication certificate for Antep Baklava.[7] 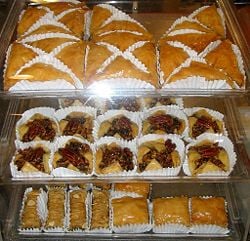 Baklava is the most famous of the Greek pastries, and every area of Greece, and sometimes every family within a region, has a favorite recipe. Variations include the use of different nuts (walnuts, almonds, pistachios), different numbers of sheets of phyllo dough, and different flavors to the syrup or filling (including cinnamon, cloves, cardamon, and rose water). Baklava is also cut into a variety of shapes for serving, although this very rich treat is always served in small portions.

In some areas, such as Evros in the northeastern part of Greece, baklava is made without brushing the phyllo. Instead, hot olive oil is poured over the entire pastry before baking. Also in northeastern Greece, a version of baklava is made with sesame seeds (in Greek, μπακλαβάς σουσαμένιος). Serving this version is an old custom on Christmas Eve in Thrace.

A walnut filling is more prevalent in the Levant, while pistachios and pistachio-almond fillings are preferred in Iran. Hungarians make an apricot version. Although purists disdain anything except the classic nut filling, some cooks innovated by adding such items as dates and chocolate chips.[4]