Doctor of the Church 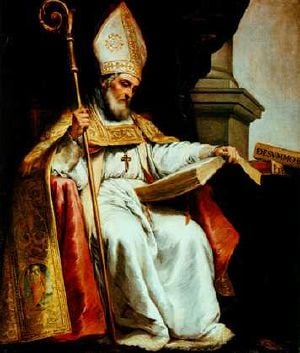 Isidore of Seville, depicted with a book, common iconographical object for a doctor.

In the Roman Catholic Church, a Doctor of the Church (Latin doctor, teacher, from Latin docere, to teach) is a saint from whose writings the whole Church is held to have derived great advantage, and to whom "eminent learning" (eminens doctrina) and "great sanctity" (insignis vitae sanctitas) are attributed by a proclamation of a pope or of an ecumenical council, although historically no ecumenical council has yet exercised the prerogative of proclaiming a Doctor of the Church. This honor is given rarely, only posthumously, and only after canonization. The Roman Catholic Church has, to date, named 33 Doctors of the Church.

Of the 33 Doctors of the Church named in the Roman Catholic Church, the 17 who died before the formal Great Schism in 1054 (marked * in the list below) are also venerated by the Eastern Orthodox Church. Among these 33 are 25 from the West and eight from the East; three women; 18 bishops, 29 priests, one deacon, two nuns, one lay woman; and 24 from Europe, three from Africa, six from Asia. No martyr is included, since inclusion in the list applies to confessors. Until 1970, no woman had been named a Doctor of the Church, but since then three additions to the list have been women. In this regard, it is interesting to quote a line from the New Catholic Encyclopedia (1967): "it would seem that no woman is likely to be named because of the link between this title and the teaching office, which is limited to males."[1] The Doctors' works vary greatly in subject and form. Some, such as Pope Gregory I and Ambrose were prominent writers of letters and short treatises. Catherine of Siena and John of the Cross wrote mystical theology. Augustine and Robert Bellarmine defended the Church against heresy. Bede's Ecclesiastical History of the English People provides the best information on England in the early middle ages. Systematic theologians include the Scholastic philosophers Anselm, Albertus Magnus, and Thomas Aquinas.

Other parts of the Roman Catholic Church

In addition, some parts of the Roman Catholic Church have recognized other individuals with this title. In Spain, Fulgentius of Ruspe and Leander of Seville have been recognized with this title. The Syro-Malabar Catholic Church has recognized Ambrose, Jerome, Gregory the Great, Augustine, Athanasius, Basil, Gregory of Nazianzus, and John Chrysostom, as well as Ephrem the Syrian, Isaac the Elder, Pope Leo I, John of Damascus, Cyril of Alexandria, Cyril of Jerusalem, Epiphanius of Salamis, and Gregory of Nyssa. The Chaldean Catholic Church has recognized Polycarp, Eustathius of Antioch, Meletius, Alexander of Jerusalem, Athanasius, Basil, Cyril of Alexandria, Gregory of Nazianzus, Gregory of Nyssa, John Chrysostom, Fravitta of Constantinople, Ephrem the Syrian, Jacob of Nisibis, James of Serug, Isaac of Armenia, Isaac of Nineve, and Maruthas.

The Eastern Orthodox Church honors many of the pre-schismatic saints as well, but the application of the term Doctor or Father of the Church is somewhat more flexible than in the West, and it is misleading to look for lists of officially recognized Doctors. An Eastern Orthodox understanding of such pillars of the Church include saints such as Photios I of Constantinople, Gregory Palamas, Nicodemus the Hagiorite, and possibly even more recent saints such as Nektarios Kefalas. An exception to this flexibility is the grouping of Basil the Great, Gregory of Nazianzus, and John Chrysostom, universal teachers or Doctors who are collectively known as the "Three Hierarchs" and represent the Christianization of the Hellenic tradition and education.

The Armenian Church recognizes as Doctors of the Church Hierotheus the Thesmothete, Dionysius the Areopagite, Pope Sylvester I, Athanasius of Alexandria, Cyril of Alexandria, Ephrem the Syrian, Basil the Great, Gregory of Nazianzus, Gregory of Nyssa, Epiphanius of Salamis, John Chrysostom, Cyril of Jerusalem, and their own saints Mesrob, Eliseus the historiographer, Moses of Chorene, David the Philosopher, Gregory of Narek, Nerses III the Builder, and Nerses of Lambron.

Assyrian Church of the East

The Assyrian Church of the East recognizes as Doctors of the Church Eliseus, Diodore of Tarsus, Theodore of Mopsuestia, and Nestorius.

Anglicans accept the pre-Reformation Doctors of the Church, laying special emphasis upon Eastern theologians. Richard Hooker is generally counted amongst the Doctors of the Church, being the only "Anglican" to receive this distinction.[2] Amongst High Church believers, the "Caroline Divines" in the seventeenth century golden age of Anglican scholarship are usually awarded the status of Church Doctors. Anglo Catholics may recognize the post-Reformation Roman Catholic Doctors as well.

The Lutheran Calendar of Saints does not use the full term "Doctor of the Church," but it does refer to Martin Luther by the term "Doctor."

The nature of naming Doctors of the Church

The proclamation of a pope about naming a Doctor of the Church even in the Roman Catholic Church is not in any way an extra cathedral decision through the magisterium, nor does it mean to declare that the teaching of any Doctor is free from error. "It is, indeed, well known that the very greatest of them are not wholly immune from error."[3] "Their writings … are not necessarily free of error in all respects."[4] Doctrinally, for example, Roman Catholicism recognizes error in the theory of Ambrose and Jerome that the fall of Adam and Eve was a sexual sin, and says that this theory "cannot be accepted" by the Catholic Church,[5] although these two theologians were among the four original Latin Doctors of the Church. Furthermore, there are diverse lists of Doctors in some parts of the Roman Catholic Church and some other Churches such as the Eastern Orthodox Church, the Assyrian Church of the East, and the Anglican Church. All this shows a considerable level of flexibility and openness on the part of the Church. And yet, the Doctors of the Church have all been recognized as the most exemplary and inspiring believers.