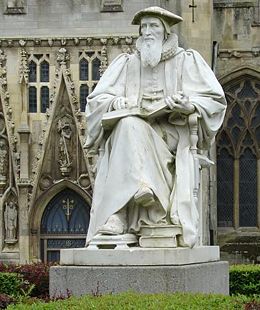 Statue of Richard Hooker in grounds of Exeter Cathedral

Richard Hooker (March 1554 – November 3, 1600) was an influential Anglican theologian, regarded, together with Thomas Cranmer and Matthew Parker, as a co-founder of Anglican theology. He was also important as an early proponent of the Anglo-American system of constitutional law. From 1584 until his death in 1600, Hooker served as a clergyman in several prominent Anglican churches. His eight-volume work, Of the Laws of Ecclesiastical Polity, which explained and defended every aspect of Anglican religious theory and practice, was a distinguished example of Elizabethan literature, and is still required reading in seminaries all over the world. Hooker considered fundamental questions about the authority and legitimacy of government (religious and secular), about the nature of law, and about various kinds of law, including the laws of physics as well as the laws of England. The philosophical basis for his work was Aristotelian, drawing from Thomas Aquinas, with a strong emphasis on natural law, eternally planted by God in creation. Hooke argued that all positive laws of Church and State are developed from Scriptural revelation, ancient tradition, reason, and experience. Of the Laws of Ecclesiastical Polity influenced John Locke, and (both directly and through Locke), American political philosophy in the late 1700s.

Hooker believed that the Church of England should be a broad, tolerant, inclusive body, in which as many as possible could worship God. He argued for a Via Media (middle way) between the positions of the Roman Catholics and the Puritans. Hooker insisted that reason and tradition should be taken into consideration when interpreting the Scriptures, and that it was important to recognize that the Bible was written in a particular historical context, in response to specific situations. Hooker's emphases on reason, tolerance, and inclusiveness considerably influenced the development of Anglicanism.

Hooker was born in March 1554, in the village of Heavitree, just a few miles to the east of Exeter, Devon, England, into a prominent family. His father, Roger, was a steward who managed the estates of some of the great families of Devon. Richard was raised by his wealthy uncle, John Hooker, Chamberlain of Exeter and one of the earliest historians in England. Hooker attended Exeter Grammar School, and in 1569, entered Corpus Christi College, Oxford, where he became a fellow in 1577. In August 1579, he was ordained by the Bishop of London. In 1584 he resigned from his college position, and became rector of Drayton Beauchamp in Buckinghamshire, and in March of 1585, was appointed Master of Temple Church. Its congregation included lawyers, judges, and many members of parliament, and in the sermons he delivered there, Hooker developed the ideas that he would later incorporate in his books. He soon came into conflict with Walter Travers, a leading Puritan and Assistant (Reader) at the Temple. Nonetheless, the two men remained on friendly personal terms.

In 1588, he married Joan Churchman, the daughter of John Churchman, a wealthy London merchant who provided the couple with financial security, so that Hooker was able to pursue his writing career. They had six children, only two of whom survived to adulthood. In 1592, Hooker became a canon at Salisbury Cathedral and Rector of the parish of Boscombe in Wiltshire. In 1594, he published first four books of the Lawes of Ecclesiastical Politie. The fifth was published in 1597, while the final four were published posthumously. In 1595, the Queen named Hooker Rector of the parish of Bishopsbourne in Kent. He died there on November 3, 1600. Hooker is honored with a special prayer (Lesser Festival) throughout the Anglican world each year, on the anniversary of his death.

Together with Thomas Cranmer, the author of The Book of Common Prayer, Hooker is considered to be the co-founder of the Anglican religious tradition, which began in England during the Reformation and today has over seventy million members around the world. Hooker's great work, Of the Laws of Ecclesiastical Polity, explains and defends every aspect of Anglican religious theory and practice, and is still required reading in seminaries all over the world.

The first four books of Of the Laws of Ecclesiastical Polity were published in 1594. The fifth was published in 1597, and the rest appeared after his death, Books VI and VIII in 1648, and Book VII in 1662. The last three volumes appear to have been heavily edited. The work represents a distinguished example of Elizabethan literature, and excerpts are still included in anthologies of English literature. Izaak Walton, Hooker's biographer quotes King James I as saying, "I observe there is in Mr. Hooker no affected language; but a grave, comprehensive, clear manifestation of reason, and that backed with the authority of the Scriptures, the fathers, and schoolmen, and with all law both sacred and civil." King James I had his sons tutored in Hooker’s works, and began a tradition of study that soon made Hooker the foremost Anglican theologian. Hooker was also important as an early proponent of the Anglo-American system of constitutional law. Of the Laws of Ecclesiastical Polity influenced John Locke, and (both directly and through Locke), American political philosophy in the late 1700s. Locke quotes Hooker numerous times in The Second Treatise of Civil Government.

Another important work was Hooker's sermon, A Learned Discourse of Justification. In an earlier sermon, Hooker had expressed the hope of meeting in Heaven many who had been Roman Catholics while on earth. A Puritan clergyman criticized this view, on the grounds that since Roman Catholics did not believe in the doctrine of justification by faith, they could not be justified. Hooker defended his belief in the Protestant doctrine of justification by faith, but argued that even those who did not understand or accept this doctrine, including Roman Catholics, could be saved by God. He emphasized that Christians should concentrate more on what united them, rather than on what divided them.

God is no captious sophister, eager to trip us up whenever we say amiss, but a courteous tutor, ready to amend what, in our weakness or our ignorance, we say ill, and to make the most of what we say aright (Richard Hooker, A Learned Discourse of Justification).

Although Hooker was unsparing in his censure of what he believed to be the errors of Rome, his contemporary, Pope Clement VIII (died 1605), said of the book: "It has in it such seeds of eternity that it will abide until the last fire shall consume all learning." Hooker's emphasis on reason, tolerance, and inclusiveness considerably influenced the development of Anglicanism.

Of the Laws of Ecclesiastical Polity

Of the Laws of Ecclesiastical Polity was written in response to a demand by English Puritans for a reformation of Church government. In Geneva, Calvin had established a system of church governance in which each congregation was ruled by a commission made up of two-thirds laymen, elected annually by the congregation, and one-third clergy serving for life. The English Puritans argued that a church governed in any other way could not claim to be Christian, and advocated the demotion of clergy and ecclesiasticism. At issue was the position of Queen Elizabeth I of England as the head of the church. If doctrine was not to be settled by authorities, and if Martin Luther's argument for the priesthood of all believers was to be carried to its extreme and there was to be government by the Elect, then having the monarch as the head of the church was intolerable. On the other hand, if the monarch were appointed by God to be the head of the church, then it was similarly intolerable for local parishes to make their own decisions about doctrine.

The principal subject of the work was the proper governance of the churches ("polity"). Hooker considered fundamental questions about the authority and legitimacy of government (religious and secular), about the nature of law, and about various kinds of law, ranging from the laws of physics to the laws of England. The philosophical base of his work was Aristotelian, drawing from Thomas Aquinas, with a strong emphasis on natural law, eternally planted by God in creation. Hooker argued that all positive laws of Church and State are developed from Scriptural revelation, ancient tradition, reason, and experience.

Hooker believed that the church should be a broad, tolerant, inclusive body, in which as many as possible could worship God. He emphasized the importance of corporate worship and reading of the Bible. He stressed the Sacrament of Holy Communion as the best way for the believer to participate with Christ in God's Incarnation.

Hooker argued for a "Via Media" (middle way) between the positions of the Roman Catholics and the Puritans. Hooker argued that reason and tradition were important when interpreting the Scriptures, and argued that it was important to recognize that the Bible was written in a particular historical context, in response to specific situations: "Words must be taken according to the matter whereof they are uttered" (Lawes IV.11.7).

Hooker argued that church organization, like political organization, is one of the "things indifferent" to God. Minor doctrinal issues were, he said, not issues that damned or saved the soul, but rather frameworks surrounding the moral and religious life of the believer. Thus, there were good monarchies and bad ones, good democracies and bad ones, but what mattered was the piety of the people. Authority, according to Hooker, was commanded by the Bible and by the practice of the early church, but should be based on piety and reason rather than automatic investiture. Authority had to be obeyed, even if it was wrong, but its errors could be remedied by right reason and the Holy Spirit. Hooker affirmed that the power and propriety of bishops was not absolute, and implied that, in certain cases, the governed might be justified in taking back authority.

Retrieved from https://www.newworldencyclopedia.org/p/index.php?title=Richard_Hooker&oldid=1091073
Categories:
Hidden category:
This page was last edited on 8 December 2022, at 21:41.
Content is available under Creative Commons Attribution/Share-Alike License; additional terms may apply. See Terms of Use for details.