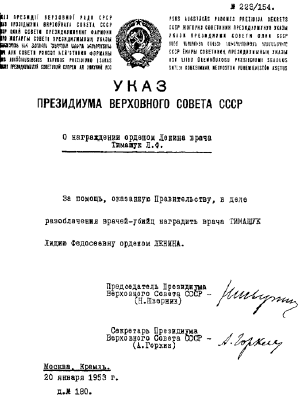 January 20, 1953. Soviet Ukaz awarding Lidiya Timashuk with the Order of Lenin for "unmasking doctors-killers." It was revoked after Stalin's death later that year.

The Doctors' plot (Russian language: дело врачей (doctors' affair), врачи-вредители (doctors-saboteurs) or врачи-убийцы (doctors-killers)) was an alleged conspiracy to eliminate the leadership of the Soviet Union. The plot was supposedly hatched by a number of by Jewish doctors conspiring to poison the top leadership in the country. The supposed conspiracy followed the pattern that was established during the late 1930s at the time of the Great Purges. Stalin used the fear generated through the purges to maintain his own personal political control over the country.

After the end of World War II and the beginning of the Cold War, as well as the formation of the State of Israel, Stalin's suspicions of any form of Jewish nationalism were expressed in several ways. The Soviet regime eliminated the Jewish Anti-Fascist Committee in 1948 and launched an anti-Semitic campaign against so-called "rootless cosmopolitans."

Simultaneously in Czechoslovakia during a November 1952 public conference regarding the Prague Trials, President Klement Gottwald announced: "During the investigation, we discovered how treason and espionage infiltrate the ranks of the Communist Party. This channel is Zionism".[1] One of the charges brought against Rudolf Slánský was "taking active steps to cut short" Gottwald's life with the help of "hand-picked doctors from the enemy camp." On December 3, 13 former Communist leaders of Czechoslovakia (11 of whom were Jews) were executed.

Then, in a December 1, 1952, Politburo session, Stalin announced:

One of the agenda items of a December 4 meeting of the Presidium of the Party (CPSU) was "The situation in MGB and sabotage in the ranks of medical workers." It was brought up by Stalin and vice-minister of MGB (Ministry of State Security) S.A. Goglidze. "Without me," Stalin declared, "the country would be destroyed because you are unable to recognize enemies." An outcome of this session was a decision to consolidate all intelligence and counter-intelligence services under the GRU, headed by S.I. Ogoltsov (later accused of organizing the killing of Solomon Mikhoels in 1948).

An article in Pravda

On January 13, 1953, some of the most prestigious and prominent doctors in the USSR were accused of taking part in a vast plot to poison members of the top Soviet political and military leadership. Pravda, the official newspaper of the CPSU, reported the accusations under the headline "Vicious Spies and Killers under the Mask of Academic Physicians":

"The majority of the participants of the terrorist group… were bought by American intelligence. They were recruited by a branch-office of American intelligence—the international Jewish bourgeois-nationalist organization called "Joint." The filthy face of this Zionist spy organization, covering up their vicious actions under the mask of charity, is now completely revealed… Unmasking the gang of poisoner-doctors struck a blow against the international Jewish Zionist organization."

Among other famous names mentioned were Solomon Mikhoels (actor-director of the Moscow State Jewish Theater and the head of the Jewish Anti-Fascist Committee assassinated on Stalin's orders in January 1948,[3] who was called a "well-known Jewish bourgeois nationalist," Dr. Boris Shimeliovich (a former Chief Surgeon of the Red Army and Director of Botkin Hospital), Miron Vovsi (Stalin's personal physician and a brother of Mikhoels), Yakov Etinger (a world-famous cardiologist), A. Feldman (otolaryngologist), A. Grinshtein (neuropathologist), Boris Kogan (therapist), Mikhail Kogan, I. Yegorov and V. Vinogradov. All of them but two were Jewish.

Initially, thirty-seven were arrested, but the number quickly grew into hundreds. Scores of Soviet Jews were promptly dismissed from their jobs, arrested, sent to gulags or executed. This was accompanied by show trials and by anti-Semitic propaganda in state-run mass media. Pravda published a letter signed by many Soviet notables (including Jews) containing incitive condemnations of the "plot."

On February 9, 1953, there was an explosion in the territory of the Soviet mission in Israel, and on February 11 the USSR broke off diplomatic relations with the Jewish state (restored in July). The next day Maria Weizmann, a Moscow doctor and a sister of the first President of Israel Chaim Weizmann (who had died in 1952), was arrested.

Outside of Moscow, similar accusations quickly appeared. For example, Ukraine discovered a local "doctors' plot" allegedly headed by famous endocrinologist Victor Kogan-Yasny (the first in the USSR who treated diabetes with insulin, saving thousands of lives). Thirty-six "plotters" were arrested there.

Archives of the KGB, which had been newly formed from the old state security apparatus (GRU) provide evidence that Stalin forwarded the collected interrogation materials to Georgi Malenkov, Nikita Khrushchev and other "potential victims of doctors' plot."[4]

Albert Einstein, Winston Churchill and other world dignitaries sent telegrams condemning the accusations to the Soviet ministry of Foreign Affairs, demanding an investigation.

Stalin's death and the consequences

Efforts to root out the "saboteurs" were halted only by the intervening death of Stalin's on March 5, 1953. Afterwards, the new leadership admitted that the charges had been entirely fabricated by Stalin and his cohorts.

The case was dismissed on March 31 by the newly appointed Minister of Internal Affairs Lavrenty Beria, and on April 3 the Presidium of the Central Committee of the Communist Party officially acquitted the arrested. Chief MGB investigator M. Rumin was blamed for making up the plot and was promptly arrested and executed.

The scenario of the "Doctors' plot" was reminiscent of the previous Stalin purges of the late 1930s, and the plan to deport the whole population based on its ethnicity resembled previous similar deportations. It is feared that Stalin was preparing a USSR-wide pogrom, the "Second Holocaust," to finish what Hitler had begun. If that is the case, the scheme was not completed because of Stalin's death on March 5, 1953.

Proponents of this version cite mainly the memoirs (sometimes only alleged) and late testimonies of contemporaries, including those by Andrei Sakharov, Anastas Mikoyan, Nikolay Bulganin, Yevgeny Tarle, Ilya Ehrenburg, and Veniamin Kaverin.

There are many problems with this evidence, since we don't really have the memoirs of Bulganin. We only have Yakov Etinger's claims (son of one of the doctors, also Yakov Etinger) that he spoke with Bulganin, who told him about the deportation plans. Etinger's credibility was put into question when he claimed to have published a previously unpublished letter to Pravda, signed by many Jewish celebrities and calling for Jewish deportation. The original two versions of the letter have been published in Istochnik and other publications. Not only did they lack any hint of a plan to deport Jews to Siberia, in fact they called for the creation of a Jewish newspaper. The real text of the famous letter actually serves as an argument against the existence of the deportation plans.

Etinger was asked to publish the notes taken during his alleged meetings with Bulganin, but they are still unpublished.

Ilya Ehrenburg's memoirs contain only a hint about his letter to Stalin, which was published along with the "Jewish Letter," and also doesn't contain any hint about the deportation.

Sakharov, Yakovlev and Tarle do not specify the sources of their claims and don't claim to be eyewitnesses. Anastas Mikoyan's edited and published version of the memoir contains one sentence about the planned deportation of the Jews from Moscow, but it is not known whether the original text contains this sentence.

Sometimes it is claimed that one million copies of a pamphlet titled "Why Jews Must Be Resettled from the Industrial Regions of the Country" were published; no copy has been found.