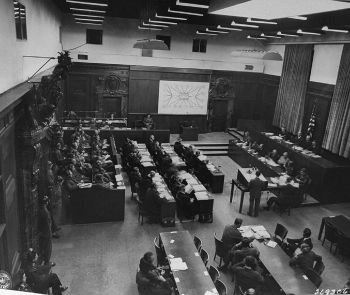 The Doctors' Trial is the unofficial name for the particular Nuremberg Trial held before a U.S. military court for 23 Nazi medical doctors and officials accused of criminal human experimentation and mass murder under the guise of euthanasia. Its official name is United States of America v. Karl Brandt et al. The trial began on December 9, 1946, and concluded on August 20, 1947.

The Doctor's Trial was one of a series of trials held in Nuremberg, Germany after World War II for individuals being charged as war criminals. The best known of these is the one held for major war criminals before the International Military Tribunal (IMT). However, twenty physicians and three officials who engaged in Nazi human experimentation and mass murder were also subject to a trial. This Doctors’ Trial was the first of 12 tribunals known as the "Subsequent Nuremberg Trials" for war crimes of high-ranking German officials and industrialists that the United States authorities held in their occupation zone in Nuremberg, Germany, after the end of the war. These trials were held before U.S. military courts (U.S. Nuremberg Military Tribunal or NMT), not before the International Military Tribunal, but took place in the same rooms at the Palace of Justice in Nuremberg. The Doctors' Trial was conducted under Control Council Law No. 10, with the indictment filed on October 25, 1946 and the trial lasting from December 9, 1946 to August 20, 1947.

Of the 23 defendants, seven were acquitted and seven received death sentences; the remainder received prison sentences ranging from 10 years to life imprisonment.

The Doctors' Trial catalogued some of the most heinous acts of torture conducted under the status of human experimentation. The Trial did lead to the Nuremberg Code, a set of ethical standards for research with human subjects, which played a pivotal role in the development of other ethical codes for researchers.

Nazi Germany, or the Third Reich, was the state between 1933 and 1945 when Adolf Hitler and the Nazi Party controlled the country. Racism, Nazi eugenics, and antisemitism were central ideological features of the regime. Discrimination and the persecution of Jews and Romani people began in earnest after the seizure of power. The first Nazi concentration camps were established in March 1933. Jews and others deemed undesirable or who opposed Hitler's rule were imprisoned, killed, or exiled. More than 1,000 concentration camps (including subcamps) were established during the history of Nazi Germany and around 1.65 million people were registered prisoners in the camps at one point. Around a million died during their imprisonment.

During the Nazi control of Germany, many German physicians and their associates advanced a "race-based program of public health and genocide," conducted unethical medical experiments "to advance medical and racial science," and inflicted "unparalleled medical atrocities" (Weindling 2011). In his summary of "The Nazi Medical Experiments," Weindling (2011) noted that "physicians and medical and biological researchers took a central role in the implementation of the Holocaust and exploited imprisonment, ghettoization, and killings as opportunities for research," and demanded that "mental and physical disabilities be eradicated from the German/Aryan/Nordic race by compulsory sterilization, euthanasia, and segregation."

Inhumane medical experiments were conducted on large numbers of prisoners, including children, by Nazi Germany in its concentration camps in the early to mid 1940s, during World War II and the Holocaust. Nazi physicians and their assistants forced concentration camp prisoners into participating in the medical experiments; they did not willingly volunteer and no consent was given for the procedures. In addition, physicians provided support for mass killings in the concentration camps by undertaking selections as to whom would be sent to the gas chambers. At Auschwitz and other camps, under the direction of Eduard Wirths, selected inmates were subjected to various experiments that were designed to help German military personnel in combat situations, develop new weapons, aid in the recovery of military personnel who had been injured, and to advance the Nazi racial ideology and eugenics (USHMM 2006), including the twin experiments of Josef Mengele (Wachsmann 2015).

The Third Reich ended in May 1945 when the Allies defeated Germany, ending World War II in Europe. 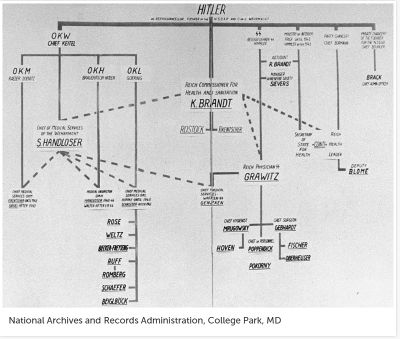 After World War II, a series of trials were held in Nuremberg, Germany for individuals being charged as war criminals. One was held for major war criminals before the International Military Tribunal (IMT). Subsequent trials, including the one known as the “Doctors’ Trial,” were held before an American military tribunal (U.S. Nuremberg Military Tribunal or NMT) under Control Council Law No. 10. The Doctors’ Trial involved twenty-three defendants, most of whom were medical doctors and were being accused of criminal human experimentation and mass murder. The trial began on December 9, 1946, and concluded on August 20, 1947.

One of the issues before the tribunal was what constituted acceptable medical experimentation involving human subjects. Some of the Nazi doctors argued that their experiments differed little from those conducted by American and German researchers in the past, and that there was no international law or even informal statements that differentiated illegal from legal human experimentation. Some Nazi doctors defended themselves by claiming that at the time of their experiments there were no explicit regulations in Germany governing medical research on human beings (Vollmann and Winau 1996).

However, as detailed in the section "Ethical standards of German medical research pre-Nazi human experimentation" of the article Nazi human experimentation, there were both informal and formal codes of ethics relative to German medical research prior to the advent of Nazism. One example was the Reich Circular on Human Experimentation of February 28, 1931, which included such regulations as the following (Weindling 2011; Vollman and Winau 1996):

Based on their review of German policy, Vollman and Winau (1996) concluded the following:

In addition, for the Doctors' Trial, the prosecution also produced a set of principles to demonstrate how the defendants' experiments had deviated from fundamental ethical principles that should govern research in civilized society. This Nuremberg Code was presented as part of the verdict issued in August 1947.

In terms of the Doctors' Trial, twenty of the twenty-three defendants were medical doctors (Viktor Brack, Rudolf Brandt, and Wolfram Sievers were Nazi officials), and were accused of having been involved in Nazi human experimentation and mass murder under the guise of euthanasia. Josef Mengele, one of the leading Nazi doctors, had evaded capture.

The judges, heard before Military Tribunal I, were Walter B. Beals (presiding judge) from Washington state, Harold L. Sebring from Florida, and Johnson T. Crawford from Oklahoma, with Victor C. Swearingen, a former special assistant to the Attorney General of the United States, as an alternate judge. The Chief of Counsel for the Prosecution was Telford Taylor and the chief prosecutor was James M. McHaney.

The trial included the testimony of 85 witnesses and about 1,500 documents were submitted (USHMM 2). On August 20, 2947 the American judges pronounced their verdict, with sixteen of the doctors/administrators found guilty and seven of these sentenced to death.

The accused faced four charges, including:

The tribunal largely dropped count 1, stating that the charge was beyond its jurisdiction.

All of the seven criminals sentenced to death were hanged on June 2, 1948, in Landsberg prison, Bavaria.

Wilhelm Beiglböck, Fritz Fischer, and Herta Oberheuser were able to resume their careers after release from prison. From 1952 to 1963, Beiglböck served as the chief physician at the Hospital of Buxtehude. Fischer started a new career at the chemical company Boehringer in Ingelheim, after regaining his license to practice medicine. Oberheuser became a family doctor in Stocksee, near Kiel, in West Germany. However, she lost her position in August 1958 after being recognized by a Ravensbrück survivor and the interior minister of Schleswig-Holstein, Helmut Lemke, revoked her medical license and shut down her practice.

Retrieved from https://www.newworldencyclopedia.org/p/index.php?title=Doctors%27_Trial&oldid=1060103
Categories:
Hidden category:
This page was last edited on 11 November 2021, at 16:13.
Content is available under Creative Commons Attribution/Share-Alike License; additional terms may apply. See Terms of Use for details.