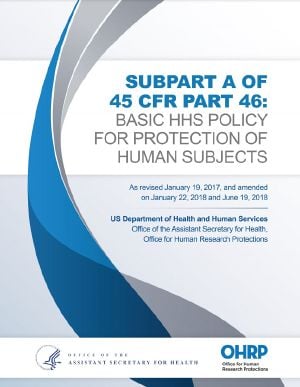 The Common Rule is a federal policy governing the protection of human research subjects as uniformly codified in separate regulations of numerous United States departments and agencies. Originally published in 1991, the Common Rule later was substantially revised and the revised Common Rule published in the Federal Register in 2017 and then further amended and finalized in 2018; it outlines provisions for Institutional Review Boards (IRBs), informed consent, and other aspects related to research involving human subjects.

The Federal Policy for the Protection of Human Subjects, or Common Rule, is codified in the Code of Federal Regulations (CFR), with each of the diverse departments/agencies utilizing identical language and section numbers in its particular chapter of the CFR. For the HHS regulations, the Common Rule constitutes subpart A, 45 CFR, part 46. For the DOE, the Common Rule is in 10 CFR, Part 745, and for the DOD in 32 CFR Part 219. Below is listed each department and agency that has adopted the Common Rule, along with the respective section of the CFR.

The development of the Common Rule came in response to growing public awareness of mistreatment of people as subjects in human research, such as the abuses in the Tuskegee Syphilis Study by the U.S. Public Health Service, and came on the foundation of various efforts, such as the National Research Act of 1974 and the Belmont Report, to provide guidance so that human subject research follows ethical standards. The adoption of the Common Rule represents a milestone in assuring that government departments and agencies have in place regulations to protect human subjects.

According to the published regulations, the Common Rule policy "applies to all research involving human subjects conducted, supported, or otherwise subject to regulation by any Federal department or agency" and "includes research conducted by Federal civilian employees or military personnel" (Subpart A of 45 CFR Part 46, 46.101). It is further noted that "department or agency heads retain final judgement as to whether a particular activity is covered by this policy and this judgement shall be exercised consistent with the ethical principles of the Belmont Report."

Among the areas covered in the Common Rule are:

For example, "research" is defined as "a systematic investigation, including research development, testing, and evaluation, designed to develop or contribute to generalizable knowledge." It is further noted that "the following activities are deemed not to be research: (1) Scholarly and journalistic activities ... (2) Public health surveillance activities ... (3) Collection and analysis of information, biospecimens, or records by or for a criminal justice agency for activities authorized by law or court order solely for criminal justice or criminal investigative purposes ... (4) authorized operation activities ... in support of intelligence, homeland security, defense, or other national security measures."

Great detail is provided for what constitutes exempt research, and thus is exempt for IRB review. The following is an excerpt on one of the categories of human subject research exempt from this policy:

(2) Research that only includes interactions involving educational tests (cognitive, diagnostic, aptitude, achievement), survey procedures, interview procedures, or observation of public behavior (including visual or auditory recording) if at least one of the following criteria is met:

(i) The information obtained is recorded by the investigator in such a manner that the identity of the human subjects cannot readily be ascertained, directly or through identifiers linked to the subjects;

(ii) Any disclosure of the human subjects' responses outside the research would not reasonably place the subjects at risk of criminal or civil liability or be damaging to the subjects' financial standing, employability, educational advancement, or reputation; or

(iii) The information obtained is recorded by the investigator in such a manner that the identity of the human subjects can readily be ascertained, directly or through identifiers linked to the subjects, and an IRB conducts a limited IRB review to make the determination required by 46.111(a)(7).

The original Common Rule was substantially revised and the revised regulations were published in 2017 and further amended in 2018. The earlier Common Rule is sometimes referenced as the "pre-2018 requirements" and the current version as the "revised Common Rule," "2018 requirements" or "2018 Rule" (Hautala-Bateman and White 2019).

Among key revisions were the following (Hautala-Bateman and White 2019):

The National Research Act (Public Law 93-348) was signed into law on July 12, 1974, by United States President Richard M. Nixon. The United States Congress had passed this law in response to concerns regarding the exploiting and harming of human subjects in medical, biomedical, and social science research. The Act created the National Commission for Protection of Human Subjects of Biomedical and Behavior Research, which had the goal of identifying ethical guidelines for human subject research and would issue the Belmont Report. The Act also directed that human subject research be reviewed and approved by IRBs.

For the Department of Health and Human Services, the Common Rule refers to subpart A of 45 CFR, part 46 of the HSS regulations. There are five subparts, the others dealing with protections for pregnant woman, human fetus, neonates (subpart B), prisoners (subpart C), children (subpart D), and requirements for IRB registration (subpart E). Each agency that has signed onto the Common Rule has identical section numbers and language in its own chapter of the Code of Federal Regulations, CFR, to those of the HHS codification at subpart A of 45 CFR, part 46 (HHS 2021).

Departments and Agencies that are Signatories to, or follow, the Common Rule

The following information was provided by the United States Department of Health and Human Services (HHS 2021a).

Note that the U.S. Food and Drug Administration (FDA), while an agency of the Department of Health and Human Services (HSS), is not a Common Rule agency, but harmonizes with the Common Rule when permitted by law (HHS 2021a).

Note: Some restrictions may apply to use of individual images which are separately licensed.
Retrieved from https://www.newworldencyclopedia.org/p/index.php?title=Common_Rule&oldid=1055772
Categories:
Content is available under Creative Commons Attribution/Share-Alike License; additional terms may apply. See Terms of Use for details.