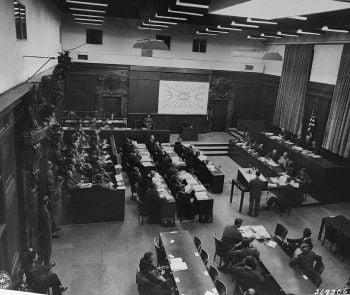 The Nuremberg Code is a landmark document that delineates a set of fundamental ethical standards for research with human subjects and arose as a result of the portion of the Nuremberg Trials dealing with the atrocities of Nazi human experimentation (the "Doctors' Trial"). The principles were released as part of the judges' decision in August 1947.

Arising from the horrifying experiments conducted on people by Nazi researchers, the value of the Nuremberg Code outside of that particular sphere was not initially appreciated. However, its importance was subsequently recognized, and it played a pivotal role in the development of other ethical codes for researchers, including having key principles incorporated in the Declaration of Helsinki, the Belmont Report, and the United States' Common Rule. The Nuremberg Code has represented an important step in recognizing the fundamental rights and dignity of human beings in the research environment.

The ten principles of the Nuremberg Code were introduced in the judges' verdict of August 19, 1947, in a section titled Permissible Medical Experiments, with the following introductory statement:

The great weight of evidence before us is to the effect that certain types of medical experiments on human beings, when kept within reasonably well-defined bounds, conform to the ethics of the medical profession generally. The protagonists of the practice of human experimentation justify their views on the basis that such experiments yield results for the good of society that are unprocurable by other methods or means of study. All agree, however, that certain basic principles must be observed in order to satisfy moral, ethical and legal concepts.

The following are the ten principles of the Nuremberg Code regarding medical experiments on human subjects. [The subheads have been added by the author of this New World Encyclopedia entry to simplify understanding. The detailed presentation of the first principle appears later.]

For the good of society and unprocurable by other means

Avoidance of all unnecessary physical and mental suffering and injury

No reason to believe death or disabling injury will occur

Protection of subject against even remote possibilities of injury, disability, or death

Researchers to be scientifically qualified

Human subject at liberty to withdraw from the experiment

Researcher's obligation to terminate experiment if likely to result in injury, disability, or death of the subject

Emphasis on voluntary and informed consent

The Nuremberg Code places a great deal of weight on the first principle: "The voluntary consent of the human subject is absolutely essential." While the other nine principles are stated, but not elaborated upon, the first principle is presented in detail.

In particular, attention is spent on explicating what is meant by voluntary consent, including the importance that the subject be provided sufficient knowledge of what the experiment entails.

This means that the person involved should have legal capacity to give consent; should be so situated as to be able to exercise free power of choice, without the intervention of any element of force, fraud, deceit, duress, over-reaching or other ulterior form of constraint or coercion; and should have sufficient knowledge and comprehension of the elements of the subject matter involved as to enable him to make an understanding and enlightened decision. The latter element requires that before the acceptance of an affirmative decision by the experimental subject there should be made known to him the nature, duration, and purpose of the experiment; the method and means by which it is to be conducted; all inconveniences and hazards reasonably to be expected; and the effects upon his health or person which may possibly come from his participation in the experiment.

Also emphasized is the duty of the researchers to ascertain the quality of the consent.

Following the presentation of the ten principles, the judges' verdict concludes with statements about the legal nature of the principles," how the principles assist in the court case to help in determining guilt and innocence and punishments:

Of the ten principles which have been enumerated our judicial concern, of course, is with those requirements which are purely legal in nature—or which at least are so clearly related to matters legal that they assist us in determining legal culpability and punishment.

As such, the judges' statement notes observed violations of these ten principles by the defendants:

The judges' verdict notes the legal principle of presumption of innocence, that "every defendant in a criminal case is presumed to be innocent of an offense charged until the prosecution, by competent, credible proof, has shown his guilt to the exclusion of every reasonable doubt." The statement further goes on to discuss in some detail the meaning of "reasonable doubt" and its application to this case.

The Nuremberg Code was issued as part of the verdict delivered at the particular Nuremberg Trial known as the “Doctors’ Trial” (officially United States of America v. Karl Brandt et al.).

The Nuremberg Trials were a series of trials held in Nuremberg, Germany, after World War II, for individuals being charged as war criminals. The best known of these is the one held for major war criminals before the International Military Tribunal (IMT). The “Doctors’ Trial” was one of the subsequent ones held before an American military tribunal (U.S. Nuremberg Military Tribunal or NMT) under Control Council Law No. 10. The Doctors’ Trial involved twenty-three defendants, most of whom were medical doctors and were being accused of criminal human experimentation. The trial began on December 9, 1946, and concluded on August 20, 1947.

One of the issues before the tribunal was what constituted acceptable medical experimentation involving human subjects. Some of the Nazi doctors argued that their experiments differed little from those conducted by American and German researchers in the past, and that there was no international law or even informal statements that differentiated illegal from legal human experimentation. For this reason, there was a need for the prosecution to demonstrate how the defendants' experiments had deviated from fundamental ethical principles that should govern research in civilized society. Two doctors who were working with the prosecution during the trial, Dr. Andrew Ivy and Dr. Leo Alexander, drew up six points delineating legitimate research principles, and they submitted this memorandum on April 17, 1947, to the U.S. Counsel for War Crimes. When the August 19, 1947, verdict was issued, these six points had been revised into ten points and issued as part of the verdict. These ten points became known as the Nuremberg Code (United States Holocaust Memorial Museum).

After the Nuremberg Trials, unethical research with human subjects continued to be conducted. To some extent, many researchers assumed that the Nuremberg Code was specific to the Nazi trials and thus were not applied to human subject research in general. In addition, even in the Doctors' Trial, "remarkably none of the specific findings against Brandt and his codefendants mentioned the code. Thus the legal force of the document was not well established" and "failed to find a place in either the American or German national law codes" (United States Holocaust Memorial Museum).

However, the Nuremberg Code did find great relevance in being a source for many subsequent codes of ethics for human subject research. The standards enumerated in the Nuremberg Code ended up being "incorporated into most subsequent ethical codes—such as the Declaration of Helsinki—and in [United States] federal research regulations" (Amdur and Bankert 2022). As noted by Amdur and Bankert (2022):

The basic elements of the Nuremberg Code are the requirement for:

Note: Some restrictions may apply to use of individual images which are separately licensed.
Retrieved from https://www.newworldencyclopedia.org/p/index.php?title=Nuremberg_Code&oldid=1058814
Categories:
This page was last edited on 10 October 2021, at 15:28.
Content is available under Creative Commons Attribution/Share-Alike License; additional terms may apply. See Terms of Use for details.