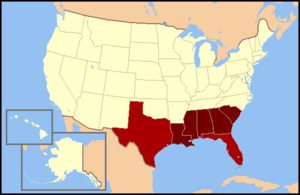 The states in dark red comprise the Deep South today. Adjoining areas of Texas and Florida are also sometimes considered part of this subregion

The Deep South is a descriptive category of cultural and geographic subregions in the American South. Historically, it is differentiated from the "Upper South" as being the states that were most dependent on plantation-type agriculture during the period before the American Civil War. The region is also commonly referred to as the Lower South or the "Cotton States."

The Deep South is a belt stretching from the Atlantic Ocean to west of the Mississippi River primarily consisting of five states, South Carolina, Georgia, Alabama, Mississippi, and Louisiana. Some consider Florida and Texas as part of the area, due to their shared borders with the other five states. They are usually identified as being those states and areas where things most often thought of as "Southern" exist in their most concentrated form.

The states are distinguished from the Old South in that the "Old South" states, are those that were among the original thirteen American colonies. Another frequently used term is "Black Belt," which Booker T. Washington described as "the part of the South … where the black people outnumber the white."

Usage of the term

The term "Deep South" is defined in a variety of ways:

Due to the migration patterns of the last half-century, large areas of Florida and Texas are often no longer included. However, there are certain parts of these states, such as East Texas and the Florida Panhandle, that retain cultural characteristics of the Deep South.[3]

For most of the nineteenth and twentieth centuries, the Deep South overwhelmingly supported the Democratic Party, viewing the rival Republican Party as a Northern organization responsible for the Civil War, which devastated the economy of the Old South. This pattern became known as the "Solid South." Since the 1964 presidential election, however,[4] along with the Civil Rights Movement, the Deep South has tended to vote for the Republican candidate in presidential elections, except in the 1976 election when Georgia native Jimmy Carter received the Democratic nomination. Since the 1990s there has been a continued shift toward Republican candidates in most political venues; another Georgian, Republican Newt Gingrich, was elected U.S. Speaker of the House in 1995. 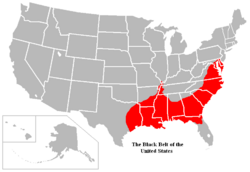 The extent of the Black Belt in the United States.

Blacks as percentage of local population, 2000. 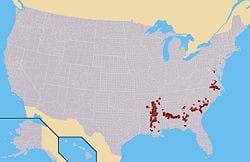 Counties in the United States where blacks are the majority of the population.

Within the Deep South is a region known as the Black Belt. Although the term originally described the prairies and dark soil of central Alabama and northeast Mississippi, it long has been used for a broad region in the South characterized by a high percentage of black people, acute poverty, rural decline, inadequate education programs, low educational attainment, poor health care, substandard housing, and high levels of crime and unemployment. While black residents are disproportionately affected, these problems apply to the region's general population. There are various definitions of the region, but it is generally a belt-like band through the center of the Deep South, stretching as far west as eastern Texas.

The term Black Belt is still used to describe a crescent-shaped region about 300 miles (480 km) long and up to 25 miles (40 km) wide, extending from southwest Tennessee to east-central Mississippi and then east through Alabama to the border with Georgia. Before the nineteenth century, this region was a mosaic of prairies and oak-hickory forests.[5] In the 1820s and 1830s, this region was identified as prime land for cotton plantations, resulting in a rush of immigrant planters and their slaves called Alabama Fever. The region became one of the cores of an expanding cotton plantation system that spread through much of the American South. Eventually, Black Belt came to describe the larger area of the South with historic ties to slave plantation agriculture and the cash crops cotton, rice, sugar, and tobacco.

After the Civil War, slave-based plantations were generally replaced by a system of sharecropping.

Although this had been a richly productive region, the early twentieth century brought a general economic collapse, among the many causes of which were soil erosion and depletion, the boll weevil invasion and subsequent collapse of the cotton economy, and the socially repressive Jim Crow laws. What had been one of the nation's wealthiest and most politically powerful regions became one of the poorest.

The African American push to be afforded civil rights equal to those of white Americans had roots in the center of the Deep South. Despite the successes of the civil rights movement, the region remains one of the nation's poorest. Most of it remains rural, with a diverse range of crops, including most of the nation's peanut and soybean production.

In his 1901 autobiography Up from Slavery, Booker T. Washington wrote, describing the Black Belt,

The term was first used to designate a part of the country which was distinguished by the colour of the soil. The part of the country possessing this thick, dark, and naturally rich soil was, of course, the part of the South where the slaves were most profitable, and consequently they were taken there in the largest numbers. Later and especially since the civil war, the term seems to be used wholly in a political sense—that is, to designate the counties where the black people outnumber the white.[6]

According to the 2000 Census, there were 96 counties in the U.S. where the black percentage of the population was over 50 percent, of which 95 were distributed across the Coastal and Lowland South in a loose arc.[7]

In 2000, a United States Department of Agriculture report proposed creating a federal regional commission, similar to the Appalachian Regional Commission, to address the social and economic problems of the Black Belt. This politically defined region, called the Southern Black Belt, is a patchwork of 623 counties scattered throughout the South.[8][9] 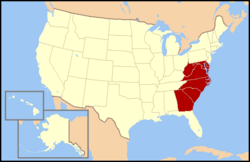 Regional definitions vary from source to source. The states shown in dark red are usually included, though their modern boundaries differ from the boundaries of the Thirteen Colonies.

Geographically, Old South is a subregion of the American South, differentiated from the "Deep South" as being the Southern states represented in the original thirteen American colonies, as well as a way of describing the former lifestyle in the Southern United States. Culturally, the term can be used to describe the antebellum period.

The Southern colonies were Virginia, Maryland, North Carolina, Delaware, South Carolina, and Georgia. Despite Maryland's early association as a Southern colony and later as a state, based on customs, economy, and slave ownership, its failure to secede during the American Civil War has resulted in a modern disassociation with the area known as the "Old South," a disassociation even more pronounced in the similar case of Delaware.

The "Old South" is usually defined in opposition to the Deep South including Alabama, Louisiana, Georgia and Mississippi, and it is also further differentiated from the inland border states such as Kentucky and West Virginia and the peripheral southern states of Florida and Texas.

After the Civil War, many southern whites used the term "Old South" with nostalgia to represent the memories of a time of prosperity, social order, and gracious living. A majority of blacks saw it as being a reference to the past times of slavery and the plantation.

Once those with personal memories of the antebellum South were largely deceased, the term continued to be used. It was used even as a marketing term, where products were advertised as having "genuine Old South goodness" and the like.

Certain groups now wish to rescue the term from racist connotations by stating that they desire to celebrate only the things about the Old South which might be considered good, such as Southern chivalry.

The former agricultural economy of the region gradually is being replaced. Louisiana's industries include chemical products, petroleum and coal products, food processing, transportation equipment, and paper products. The Port of South Louisiana, located on the Mississippi River between New Orleans and Baton Rouge, is the largest volume shipping port in the Western Hemisphere and fourth largest in the world.[10] Tourism and culture are also major factors in Louisiana's economy. In the twentieth century Alabama transitioned from agriculture to diversified interests in heavy manufacturing, mining, education, and technology. Alabama is on track to surpass Michigan as the largest automobile manufacturing state in North America. Georgia has emerged as a regional leader, due in large part to Atlanta's steady economic and population growth.

Before Hurricane Katrina struck the Gulf Coast in 2005, Mississippi was the second largest gambling state in the United States, after Nevada and ahead of New Jersey, seeking to capitalize on its climate to offset prevailing rural poverty. A 2007 United States Government report found that even though Mississippi ranked as the poorest state in the nation, Mississippians consistently rank as one of the highest per capita in charitable contributions.[11] While cotton farmers have large, mechanized plantations, some of which receive extensive federal subsidies, many Mississippians live in poverty as rural landless laborers.

Farms across the Deep South have become fewer but larger in recent years. South Carolina ranks third in peach production and fourth overall in tobacco production. Other top agricultural commodities include nursery and greenhouse products, watermelons, peanuts, chickens and turkeys.

As many as 25 percent of the manufacturing companies in South Carolina are foreign-owned.[12] In 2003, foreign trade pumped $23 billion into the state's economy and generated $2.5 billion in state and local taxes.[13] While South Carolina remains a major agricultural producer, its industrial outputs include textiles, chemical products, paper products, and machinery.

Some of the urban areas in the region, such as Atlanta, Georgia and Miami, Florida, are progressive in terms of economy, technology, social services, and are cultural and tourist centers. However, much of the rural Deep South suffers from poverty, inadequate medical and education services, and few opportunities for personal enrichment. For these disparities need to be resolved, it is incumbent upon the states' leaders to find solutions.