Daphnia is a genus of small, aquatic, mostly freshwater crustaceans, generally between .2 and 5 mm (.008 to .2 inches) in length, belonging to the Daphniidae family of the Cladocera order, and characterized by a single compound eye, two doubly branched antennae, and a generally translucent carapace. Daphnia or daphnids are commonly called water fleas because of their jerky or jumping swimming style (although fleas are insects and thus these two groups are only very distantly related as being arthropods).

However, the common name water flea also is applied to other animals, including members of the Cladocera order in general, as well as the copepod genera Cyclops and Diaptomus.

Daphnids, which are mostly planktonic, live in various aquatic environments ranging from acidic swamps to freshwater lakes, ponds, streams, and rivers. There are no known marine representatives of the Daphnia genus, and only about one percent of Cladocerans are found outside of freshwater environments, mostly in brackish water.

Like other taxa, daphnia exhibit a bi-level functionality, advancing not only their own survival, reproduction, and development, but also playing a valuable role in the ecosystem and for humans. Ecologically, daphnia are important components of freshwater food chains, consuming algae and other small organisms, and in turn being prey for small fish and other carnivorous aquatic animals. For humans, daphnia not only add to the wonder of nature, but also are a valuable species for research and as an indicator species. Their translucent carapace particularly makes them excellent subjects under the microscope. 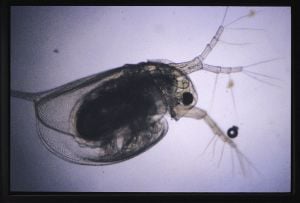 Daphnia through a microscope 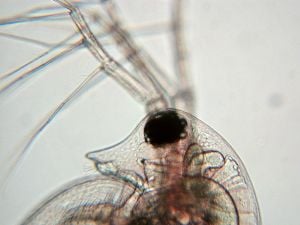 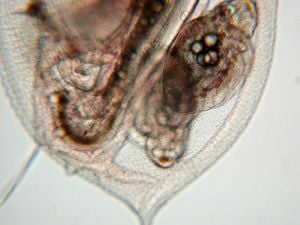 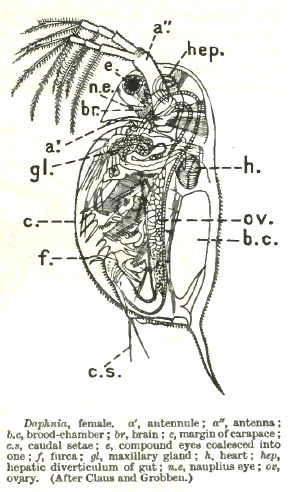 Daphnia are crustaceans (subphylum Crustacea), a group of arthropods that includes the familiar crabs, lobsters, shrimps, barnacles, copepods, krill, and crayfish. Crustaceans are characterized by having branched (biramous) appendages, an exoskeleton made up of chitin and calcium, two pairs of antennae that extend in front of the mouth, and paired appendages that act like jaws, with three pairs of biting mouthparts. They share with other arthropods the possession of a segmented body, a pair of jointed appendages on each segment, and a hard exoskeleton that must be periodically shed for growth. Most species of crustaceans are marine, but there are many freshwater forms, such as crayfish and Daphnia, and some terrestrial forms.

The order to which daphnia belong, Cladocera, is comprised of free-swimming organisms, and most orientate themselves with dorsal side up. They have a two-valved carapace, generally covering most of the body except the appendages. The head is typically separated from the body by a deep indentation, but also may not be separated. It projects forward as a beak or rostrum. On the forehead is an unpaired compound eye, a result of two fused eyes, and, in most species, a simple naupliar eye (an organ retained from the "naupliar" larval stage). The number of ommatidia that make up the compound eye varies from species to species according to their food preferences. The plankton-filtering Daphnia has an eye of only 22 ommatidia, while the carnivorous Evadne and Leptodora have 80 and 300, respectively.

On the lower side of the head is the mouth, surrounded by the upper lip in front, the mandibles at the sides, and the maxillae (jaws) at the back. The thorax of water fleas is very short and consists of four to six segments.

In Daphnia, the division of the body into segments is nearly invisible. The head is fused, and is generally bent down toward the body with a visible notch separating the two. In most species, the rest of the body is covered by a carapace, with a ventral gap in which the five or six pairs of legs lie. The most prominent features are the compound eye, the second pair of antennae, and a pair of abdominal setae.

In many species, the carapace is translucent or nearly so. The heart is at the top of the back, just behind the head, and the average heart rate of daphnids is approximately 180 beats per minute under normal conditions.

The lifespan of a Daphnia does not exceed one year and is largely temperature dependent. For example, individual organisms can live up to 108 days at 3°C while some organisms live for only 29 days at 28°C. A clear exception to this trend is during the winter time in which harsh conditions limit the population and in which females have been recorded to live for over six months. These females generally grow at a slower rate but in the end are larger than ones under normal conditions.

A few Daphnia prey on tiny crustaceans and rotifers, but most are filter feeders, ingesting mainly unicellular algae and various sorts of organic detritus including protists and bacteria. They also eat forms of yeast, but mostly in laboratories or controlled environments. Daphnia can be kept easily on a diet of yeast.

Beating of the legs produces a constant current through the carapace, which brings such material into the digestive tract. The trapped food particles are formed into a food bolus, which then moves down the digestive tract until voided through the anus located on the ventral surface of the terminal appendage.

The first and second pairs of legs are used in the organisms' filter feeding, ensuring that particles too large to handle are kept out while the other sets of legs create the stream of water rushing into the organism. 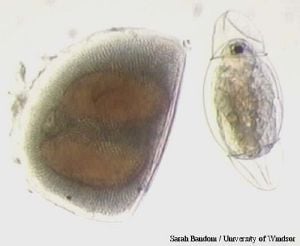 Resting egg pouch (ephippium) and the juvenile Daphnid that just hatched from it.

Under favorable environmental conditions, Daphnia reproduce parthenogenetically, usually in the spring until the end of the summer.

One or more juvenile animals are nurtured in the brood pouch inside the carapace. The newly hatched Daphnia must molt several times before they are fully grown into an adult usually after about two weeks. The young are small copies of the adult; there are no true nymphal stages.

Fully mature females are able to produce a new brood of young about every ten days under ideal conditions. The reproduction process continues while the environmental conditions continue to support their growth.

When winter approaches, or in drought conditions, or at times of other harsh environmental conditions, production of new female generations ceases and parthenogenic males are produced. However, even in harsh environmental conditions, males may make up considerably less than half the population; in some species males are unknown. Males tend to be much smaller in size than females, and are also distinguished by larger antennules (Clare 2002). They typically possess a specialized abdominal appendage, which is used in mating to grasp a female from behind and prise open her carapace and insert a spermatheca, and thus fertilize the eggs. These fertilized eggs are termed winter eggs and are provided with extra shell layer called ephippium. The extra layer preserves and protects the egg inside from harsh environmental conditions until the more favorable times, such as spring, when the reproductive cycle is able to take place once again.

In addition to the production of eggs capable of overwintering, this switch to sexual reproduction has also been proposed to allow greater offspring variation (through genetic recombination), which may be useful in varied or unpredictable conditions.

Ecologically, daphnia are important components of freshwater food chains, consuming algae and other small organisms, and in turn being prey for small fish and other carnivorous aquatic animals, such as the immature aquatic stages of dragonflies and damselflies.

For humans, daphnia also make model organisms for biological study. The translucent carapace makes them excellent subjects for the microscope as one can observe the beating heart. Even under relatively low power, it is possible to observe the feeding mechanism working, watch immature young moving in the brood-pouch, observe the eye being moved by the ciliary muscles, and even watch blood corpuscles being pumped round the circulatory system by the simple heart. Daphnids, like many animals, are prone to alcohol intoxication, and make excellent subjects for studying the effects of the depressant on the nervous system—due to the translucent exoskeleton, and the visibly altered heart rate. They are tolerant of being observed, live under a cover slip and appear to suffer no harm when returned to open water. This experiment can also be done using caffeine, nicotine, or adrenaline and observing an increase in heart rate.

Sometimes Daphnia may be used in certain environments to test the effects of toxins on an ecosystem. This makes Daphnia an indicator species, particularly useful for that purpose because of its short lifespan and reproductive capabilities.