Damselfly is the common name for any of the predaceous insects comprising the suborder Zygoptera of the order Odonata, characterized by an elongated body, large multifaceted eyes that are widely separated, and two pairs of strong transparent wings, which at rest typically are held folded together above the abdomen or held slightly open above the abdomen. Damselflies are similar to dragonflies (suborder or infraorder Anisoptera) but differ in several ways, including the fact that dragonflies at rest typically hold their wings out to the side or out and downward.

Damselflies provide important ecological and aesthetic values. Widely distributed, found on every continent except Antarctica, both the larvae and adults are key components of aquatic and terrestrial food chains, serving as both predator and prey in both systems, and helping to control insects pests, such as mosquitoes. For humans, they are a popular subject of art and culture in various nations, notably Japan (Trueman and Rowe 2008), and their grace, often striking colors, and unique mating behaviors add to the beauty of nature.

As with all members of the arthropod class Insecta, damselflies have three pairs of jointed appendages, exposed mouth parts, an exoskeleton, a segmented abdomen that lacks any legs or wings, and one pair of antennae on the head.

Damselflies and dragonflies comprise the order Odonata, a taxon of about 6,500 insects placed into just over 600 genera (Trueman and Rowe 2008). Members of Odonata are characterized by large, compound eyes, chewing mouth parts, a long and slender abdomen, and multi-veined wings that are typically clear or transparent. They also have large rounded heads, legs that facilitate catching prey (other insects) in flight, two pairs of long, transparent wings that move independently, and elongated, ten-segmented abdomens. In most families of Odonata, the wings, which are large, multi-veined, and slender, have an opaque structure on the leading edge near the tip of the wing, called the pterostigma. Males have unique secondary genitalia on the underside of the second and third abdominal segments, which are distinct from the actual genital opening located near the tip of the abdomen (Grzimek et al. 2004). 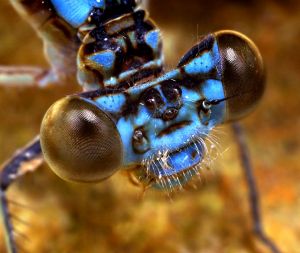 Head of a damselfly 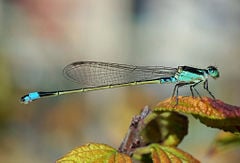 Although generally fairly similar, with an elongated body, large multifaceted eyes, and two pairs of strong transparent wings, adults of damselflies and dragonflies differ in several, easily recognizable traits. The large, compound eyes of damselflies typically have a gap between them. In dragonflies, the eyes typically occupy much of the animal's head, touching (or nearly touching) each other across the face (with notable exceptions to this being in the Petaluridae (petaltails) and the Gomphidae (clubtails) families). Damselflies also tend to be less robust than dragonflies, even appearing rather weak in flight, and when at rest hold their wings either folded together back above the abdomen or held slightly open above (such as in the family Lestidae). Dragonflies have fairly robust bodies, are strong fliers, and at rest hold their wings either out to the side or out and downward (or even somewhat forward). There are exceptions to this, as some zygopteran families have wings that are held horizontally at rest, and in one anispteran genus the wings are held vertically together above the abdomen, like damselflies (Trueman and Rowe 2008). Another difference between damselfies and dragonflies relates to the hind wing. The hind wing of the damselfly is essentially similar to the fore wing, while the hind wing of the dragonfly broadens near the base, caudal to the connecting point at the body.

In damselflies, each of the two pairs of wings are nearly exactly equal in size, shape, and venation; there may be very numerous crossveins or rather few (Trueman and Rowe 2008). Damselfly wingspans range from just 20 millimeters (0.8 inches) in Agriocnemis femina up to 190 centimeters (7.5 inches) in the giant Central American damselfly, Megaloprepus coerulatus. Some very large fossil species have been discovered as well.

The larval stage of damselflies (and dragonflies) are characterized by a conspicuous grasping labium used for catching prey (Trueman and Rowe 2008). This lower lip "mask" is held at rest in a folded position underneath the head and thorax, with one end extending back as far or further than the front legs, with the anterior portion sometimes forward enough in some species to cover the lower part of the face, below the compound eyes (Trueman and Rowe 2008). In capturing prey, the labium is extended rapidly forward to grasp the prey with paired palps, like grasping hands (Trueman and Rowe 2008). 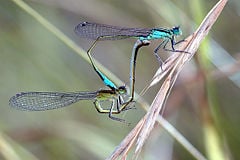 As a member of Odonata, the damselfly life cycle is similar to that of the dragonfly.

Damselflies undergo incomplete metamorphosis. Incomplete metamorphosis, also called hemimetabolism, simple metamorphosis, gradual metamorphosis, or hemimetaboly, is a term applied to those processes in which the larvae resembles the adults somewhat, as they have compound eyes, developed legs, and wing stubs visible on the outside, but the juvenile forms are smaller and, if the adult has wings, lack wings. In this mode of development, there are three distinct stages: The egg, nymph, and the adult stage, or imago. These groups go through gradual changes; there is no pupal stage. In hemimetabolism, the development of larva often proceeds in repeated stages of growth and ecdysis (molting); these stages are called instars.

In damselflies, as with dragonflies, the life cycle typically has an aquatic stage. The female lays eggs in water, sometimes in underwater vegetation, or high in trees in bromeliads and other water-filled cavities. The aquatic nymphs are carnivorous, feeding on daphnia, mosquito larvae, and various other small aquatic organisms. They are non-discriminate predators, eating any animal as large as or smaller than themselves, including tadpoles and fish fry, and even members of their own species (Trueman and Rowe 2008). The gills of damselfly nymphs are large and external, resembling three fins at the end of the abdomen. After molting several times, the winged adult emerges and eats flies, mosquitoes, and other small insects. Some of the larger tropical species are known to feed on spiders, hovering near the web and simply plucking the spider from its perch.

While almost all odonate larvae are aquatic, there are a half-dozen or species, from distantly related families, that have fully terrestrial larvae (Trueman and Rowe 2008). 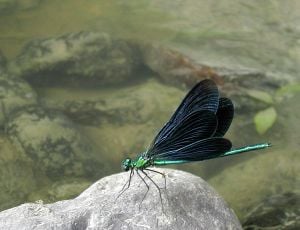 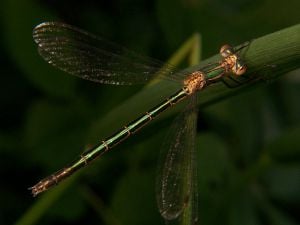 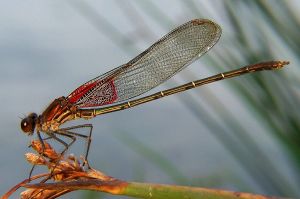