One of twelve children of the tribal chief, Dan George served as chief of the Tsleil-Waututh Nation from 1951 to 1963. He was also an Academy Award-nominated actor, a successful poet, a philosopher, champion of First Nations peoples, and the loving patriarch of a large family.

His recitation of "Lament for Confederation" at Vancouver's 1967 Canadian Centennial celebrations in Empire Stadium helped galvanize native political activism in the province, and also created support and awareness among non-natives. Throughout his acting career, he refused any role he thought might be demeaning to Native people.

Chief Dan George, a member of the Tsleil-Waututh First Nation, also known as the Burrard Band, was born on a Salish Band reserve on Burrard Inlet on July 24, 1899. He was one of twelve children of the tribal chief.

Burrard Inlet is a relatively shallow-sided coastal fjord in southwestern British Columbia, Canada. It separates the City of Vancouver and the rest of the low-lying Burrard Peninsula (to the south) from the slopes of the North Shore Mountains. The area has been home to the Indigenous peoples of the Sḵwxwú7mesh and Tsleil-waututh, who have resided in this territory for thousands of years.

His given name was Geswanouth Slahoot (pronounced and sometimes spelled as Tes-wah-no), which means "thunder coming up over the land from the water". This was anglicized as Dan Slaholt. He and his brother Harry were given the last name George when they began school at the Roman Catholic Oblate Mission.

George's father believed it was best for his children's future for them to learn the English language, so he enrolled them at the Mission school. Dan was five years old at the time. They knew no English when they arrived and were forbidden to speak their native language. The next eleven years were difficult ones, being distanced from family, culture, language and customs. During this period they saw their parents twice a month; every two weeks they rode the streetcar to the end of the line and walked seven miles to their home for a weekend visit. George did well in school, but government funding for Native education stopped when a student reached the age of 16. Following the completion of his education, Dan George worked as a logger.

At the age of 17, he entered into an arranged marriage with a sixteen year old Sḵwxwú7mesh (Squamish) girl named Amy. The union lasted fifty-two years until Amy's death. They had eight children, six of whom survived into adulthood.

Dan George's father-in-law helped him get a coveted job as a longshoreman in Vancouver Harbor. He did this work for twenty-seven years. During frequent labor strikes in the 1920s and the Great Depression in the 1930s he supplemented his income with hunting and lumbering. A serious accident on the docks in 1947, which damaged a hip and leg, ended his longshoreman career.

He worked odd jobs throughout the 1940s, including traveling throughout British Columbia with his children and other family members, performing as "Dan George and His Indian Entertainers." George later said these were the happiest times of his life.

On September 23 1981, Chief Dan George died of natural causes at the Lion's Gate Hospital in North Vancouver, on the same Indian Reserve where he was born, at the age of 82. He was interred at Burrard Cemetery in his native birthplace. He left behind six children and 36 grandchildren. George was succeeded as tribal Chief by his son, Leonard.

In 1960, at the age of 60 years, Dan George got his first job acting in a CBC Television series, Cariboo Country, as the character "Ol' Antoine". He performed the same role in a Walt Disney Studios movie, Smith!, adapted from an episode in this series (based on Breaking Smith's Quarter Horse, a novella by Paul St. Pierre).

In 1970 Chief Dan George starred with Dustin Hoffman in the U.S. Western film Little Big Man directed by Arthur Penn and based on the 1964 novel by Thomas Berger. For his portrayal of Old Lodge Skins, George was nominated for an Academy Award as Best Actor in a Supporting Role. He won multiple honors for his performance including the Producers Guild of America Award, the National Society of Film Critics Award and the New York Film Critics Circle Award. He was also nominated for a Golden Globe as Best Supporting Actor. Tragically, George's wife of more than 50 years, Amy, died just before the Academy Award ceremony. He returned to his two-room wood house on the Burrard Reserve, where he lived with one of his daughters and her children. 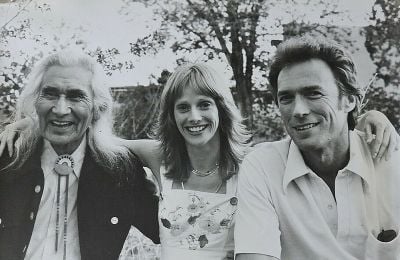 He continued to act in other films, such as The Outlaw Josey Wales, Harry and Tonto and Americathon, and on television, including a role in the miniseries Centennial, based on the book by James A. Michener, as well as appearing in a 1973 episode of the original Kung Fu series, with David Carradine.

George played the role of Rita Joe's father in George Ryga's stage play, The Ecstasy of Rita Joe, in performances at Vancouver and the National Arts Centre in Ottawa. It was also produced in Washington, D.C., in May 1973, with Dan George and Frances Hyland in lead roles.

During his acting career, George worked to promote better understanding by non-aboriginals of the First Nations people. His soliloquy, Lament for Confederation, an indictment of the appropriation of native territory by white colonialism, was performed at the city of Vancouver's celebration of the Canadian centennial in 1967. This speech is credited with escalating native political activism in Canada, as well as touching off widespread pro-native sentiment among non-native peoples.

National and international recognition of Chief Dan George grew following a speech he gave on Canada Day 1967. As the nation celebrated its centennial, he chose this day to perform his soliloquy, Lament for Confederation. With an audience of 35,000 in the Empire Stadium in Vancouver, he was accompanied by family members, who drummed and chanted as he spoke.

"How long have I known you, Oh Canada? A hundred years? Yes, a hundred years. And many, many seelanum more. And today, when you celebrate your hundred years, Oh Canada, I am sad for all the Indian people throughout the land.

"But in the long hundred years since the white man came, I have seen my freedom disappear like the salmon going mysteriously out to sea. The white man's strange customs, which I could not understand, pressed down upon me until I could no longer breathe.

"When I fought to protect my land and my home, I was called a savage. When I neither understood nor welcomed his way of life, I was called lazy. When I tried to rule my people, I was stripped of my authority.

"My nation was ignored in your history textbooks - they were little more important in the history of Canada than the buffalo that ranged the plains. I was ridiculed in your plays and motion pictures, and when I drank your fire-water, I got drunk - very, very drunk. And I forgot.

"Oh Canada, how can I celebrate with you this Centenary, this hundred years? Shall I thank you for the reserves that are left to me of my beautiful forests? For the canned fish of my rivers? For the loss of my pride and authority, even among my own people? For the lack of my will to fight back? No! I must forget what's past and gone.

"Oh God in heaven! Give me back the courage of the olden chiefs. Let me wrestle with my surroundings. Let me again, as in the days of old, dominate my environment. Let me humbly accept this new culture and through it rise up and go on.

"Oh God! Like the thunderbird of old I shall rise again out of the sea; I shall grab the instruments of the white man's success-his education, his skills- and with these new tools I shall build my race into the proudest segment of your society.

"Before I follow the great chiefs who have gone before us, Oh Canada, I shall see these things come to pass. I shall see our young braves and our chiefs sitting in the houses of law and government, ruling and being ruled by the knowledge and freedoms of our great land.

"So shall we shatter the barriers of our isolation. So shall the next hundred years be the greatest in the proud history of our tribes and nations."[1]

When he died in 1981 at the age of 82, Dan George had become an icon of gentleness and quiet humor in households across North America. In addition to being seen as a talented actor, he was also seen by many as a representative of the Native people, a role of which he was very aware. Taking this responsibility very seriously, he was always concerned to portray his people in the best light possible, refusing any role he felt to be demeaning to Native people.[2]

George's determination to benefit Native people was demonstrated at the celebration of Canada's centennial when he performed his soliloquy, "Lament for Confederation."

Canadian actor Donald Sutherland narrated the following quote from his poem "My Heart Soars" in the opening ceremonies of the 2010 Winter Olympics in Vancouver.[3]

The beauty of the trees,
the softness of the air,
the fragrance of the grass,
speaks to me.
And my heart soars.

On June 25 1971, Chief Dan George was appointed an Officer of the Order of Canada. He was recognized for his "services both as an actor and as an interpreter of his people."[4] The Order of Canada is Canada's highest civilian order and is the centerpiece of the Canadian system of honors. It is a three-tiered order established as a fellowship that recognizes the achievement of outstanding merit or distinguished service by Canadians, through life-long contributions in every field of endeavor, and who made a major difference to the nation.[4]

In 1998, the American Indian Motion Picture Award Ceremony honored him posthumously on the occasion of a film documentary on his life, Today Is a Good Day: Remembering Chief Dan George, which included interviews with his family and actor Dustin Hoffman. The festival director, Mike Smith, spoke about George and the importance of his role in Little Big Man nearly three decades earlier. Smith called it "the first film that really showed the other side of Native people, the love and the respect of family and culture."[5] 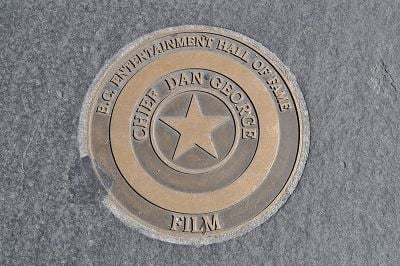 He was included on the famous Golden Rule Poster under "Native Spirituality" with the quote: "We are as much alive as we keep the earth alive."[6]

Several schools were named in honor of Chief Dan George:

Retrieved from https://www.newworldencyclopedia.org/p/index.php?title=Dan_George&oldid=1072726
Categories:
Hidden category:
This page was last edited on 11 July 2022, at 19:51.
Content is available under Creative Commons Attribution/Share-Alike License; additional terms may apply. See Terms of Use for details.