According to Christian tradition, Saint Anne (also Ann or Anna) was the mother of the Virgin Mary. Born of the Davidic lineage, her name is a Greek rendering of the Hebrew Hannah, meaning "Grace."

Saint Anne is not named in the canonical Gospels or anywhere else in the New Testament. According to the apocryphal Infancy Gospel of James, Anne and her husband Joachim, after years of childlessness, prayed desperately for God to bless them with a child. They were eventually visited separately by an angel who told them that their prayer had been answered. Anne promised to dedicate the child to God's service. After she gave birth to Mary, the couple gave the child to the service of the Temple in Jerusalem when she was three years old.

Saint Anne has long been venerated in the Orthodox churches, but did not gain importance in the West until the thirteenth century. She later became the subject of controversy over the question of whether she was a virgin when she gave birth to Mary. This led to the doctrine of the Immaculate Conception, according to which Mary was conceived through sexual intercourse between her parents, but was born without original sin.

Anne is a patron saint of Quebec and Brittany, and patroness of women in labor and miners. 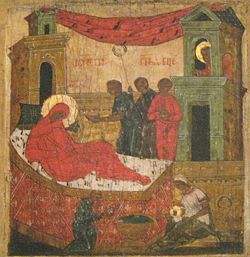 Russian icon of Saint Anne at the birth of Mary

Information about Joachim and Anne is derived from apocryphal literature such as the Gospel of the Nativity of Mary, the Gospel of Pseudo-Matthew and the Protoevangelium of James, also called the Infancy Gospel of James. The earliest is the Protevangelium of James and is dated to about 150, the other two seem to have based their writings at least in part on this document as well as oral tradition or imagination.

The Protoevangelium was once honored as scripture by Christian churches among the Greeks, Syrians, Copts, and Arabs. Portions of it were read on the feasts of Mary. Only after Jacobus de Voragine incorporated the story of Anne and Joachim into his Golden Legend in the thirteenth century did western church leaders give it much attention, just as the cult of Mary was nearing its zenith in the wake of the ministry of Saint Bernard of Clairvaux. After this, Anne became very popular in the Latin church as well, even spawning a controversy as to whether Anne herself was a virgin when she gave birth to Mary.

In the sources, Anne and Joachim were married for many years in Nazareth but were childless. When Joachim went to offer sacrifices in the Temple, he was rejected because he was unworthy as he had no offspring. Joachim was brokenhearted and went to the mountains to take up his cause with God. There, he fasted and prayed for 40 days. Anne feared for his life, saying, "I lament that I am a widow and I lament that I am childless." She begged God to take away her sterility and promised to dedicate her child to His service. 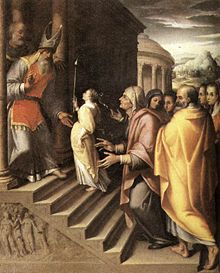 Presentation of Mary at the Temple

The Infancy Gospel of James preserves a psalm supposedly composed by Anne in her grief. It reads:

God answered their prayers when an angel appeared to Anne, saying: "Anna, the Lord has looked upon thy tears; thou shalt conceive and give birth and the fruit of thy womb shall be blessed by all the world."

Meanwhile, Joachim had received his own revelation and had returned from his vigil. When she saw Joachim coming with his flocks, "Anna ran and wrapped herself around his neck, saying, 'Now I know that the Lord God has blessed me greatly. See, the widow is no longer a widow and the childless woman has conceived in her womb." (IGJ 4:9)

Anne gave birth to a daughter, Miriam, or Mary. When Mary was three years old, her parents reportedly brought her to the Temple of Jerusalem, in fulfillment of their promise, where they left her to be brought up.

Relation to the story of Hannah

The story bears a clear similarity to that of the conception and birth of Samuel, whose mother Hannah had also been childless. Hannah went to Tabernacle at Shiloh, where her prayers were ultimately blessed by the priest Eli. She gave birth to Samuel, and returned after he was weaned to offer him to God's service. The name of Mary's mother in Hebrew would be written, "Hannah."

The similarity of these events cause some scholars to doubt the story of Mary's birth and her parents' story. However, such parallelism in the biblical narratives is hardly rare. Other miraculous births to once-sterile mothers include Isaac's birth to Sarah, Samson's birth to his parents, and John the Baptist's birth to Elizabeth.

Although Anne's cult receives little attention in the Western church prior to the late twelfth century,[1] dedications to Anne in the Eastern church occurred as early as the fourth century. A canon in the Greek Office of Saint Anne was composed by Saint Theophanes, and later by Anatolius of Byzantium (died 458).[2] Justinian I (died 565) dedicated a church to Anne. 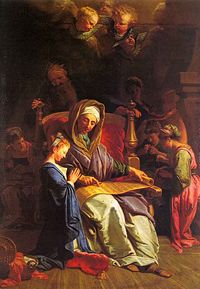 In the Orthodox tradition, Anne is ascribed the title Forbear of God, and both the Birth of Mary and the Dedication of Mary to the Temple are celebrated as two of the Twelve Great Feasts.

The Eastern feast is on July 25, possibly the date of the dedication of Anne's first church in Constantinople, or in commemoration of the day her relics arrived at the church of Saint Sophia in the year 710, where they were kept until 1333. This information is found in the Calendar of Constantinople (first half of the eighth century), the oldest liturgical document of the Greek Church. There is also a collective feast of Saint Joachim and Saint Anne on September 9.

Originally observed in the East, probably as early as 543 at Jerusalem, the Western observance of the Presentation of the Virgin Mary was first recorded in England in the eleventh century.[3] In 1585, Pope Sixtus V officially included this event in the Western church calendar on November 21.

Saint Anne was not venerated much by the Latin Church before the thirteenth century, except in the south of France. The Dominican priest, Jacobus de Voragine printed the story of Anne in his Golden Legend in 1298, after the Crusaders brought the story from the Orient to Europe. Earlier, the cult of Mary had grown rapidly in Europe, largely as the result of the ministry of Bernard of Clairvaux, creating a receptive atmosphere for Saint Anne's recognition. The Franciscans, Dominicans, Augustinians, and Carmelites supported the veneration of Saint Anne. In southern France, a Feast of Saint Anne was celebrated in the fourteenth century, on November 21, 1378 by Pope Urban VI. From this time on, it spread to all of the Western church. The Latin Church formally accepted it in 1584 under Pope Gregory XIII.

Anne's body was supposedly brought to Apt a town in Provence, in southern France, by none other than Lazarus, the resurrected friend of Christ. It was then hidden by Saint Auspicius (died 398), and found again during the reign of Charlemagne. Some claimed that her head was kept at Mainz, Germany up to 1510 from where it was stolen and then placed in Düren in Rheinland.

Debate has arisen as to whether Joachim was Anne's only husband, or whether she was married up to three times. Ancient belief, attested to by a sermon of St John Damascene, was that Anne married once. In late medieval times, legend held that Anne was married three times, first to Joachim, then to Clopas, and finally to a man named Solomas. Each marriage reportedly produced one daughter: Mary, mother of Jesus, Mary of Clopas, and Mary Salomae, respectively.[4]

Similarly, in the fourth century, and then much later in the fifteenth century, a belief arose that Mary was born to Anne by virgin birth.[5] Those believers included the sixteenth century mystic Valentine Weigel who claimed Anne conceived Mary by the power of the Holy spirit. This belief was condemned as an error by the Catholic Church in 1677. Instead, the Church now teaches that Mary was conceived in the normal fashion, but that she was miraculously preserved from original sin in order to make her fit to bear Christ. The conception of Mary free from original sin is termed the Immaculate Conception (of Mary), which is frequently confused with the Virgin Birth or Incarnation of Christ. 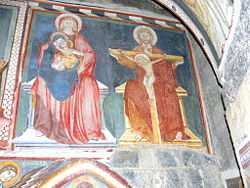 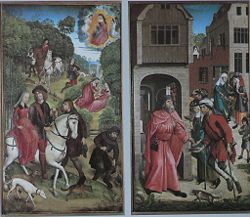 Joachim and Anne are sometimes shown meeting at the "Golden Gate" of Jerusalem, where they embrace. They are aware of Anne's pregnancy, of which they have been separately informed by an archangel. For those who believed in the virginal birth of Mary by Anne, this moment stood for her conception, and the feast was celebrated on the same day as the Immaculate Conception. Components of the cycle of the Life of the Virgin in which Anne is normally shown include the Birth of Mary, the Presentation of Mary, and the Marriage of the Virgin.

In Western iconography, Anne may be recognized by her depiction in red robe and green mantle, often holding a book. Images may also be found depicting Anne holding a small Mary who in turn holds an infant Christ. Such trinitarian representations mirror similar depictions of the Trinity, and were sometimes produced as pairs.[6]

Anne's picture was found recently in the church of Santa Maria Antiqua in Rome, (eighth century) whose origin seems Byzantine.

There was a tradition that Anne went (separately) to Egypt and joined the Holy Family there after their Flight to Egypt. Anne is not seen with the adult Christ, being regarded as having died during the youth of Jesus.[7] Anne is also shown as the matriarch of the Holy Kinship, the extended family of Jesus, a popular subject in late medieval Germany. 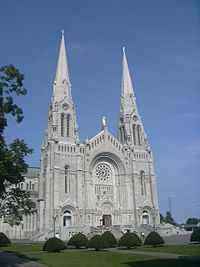 Saint Anne is the primary patron of the province of Quebec, Canada, celebrated at the Basilica of Saint Anne de Beaupré.[8] She is also the patron of the following places among numerous others: Canada; France; Brittany; Adjuntas, Puerto Rico; Detroit, Michigan; Norwich, Connecticut; Santa Ana Pueblo; Seama, New Mexico; Taos, New Mexico; Marsaskala; and the Philippines.