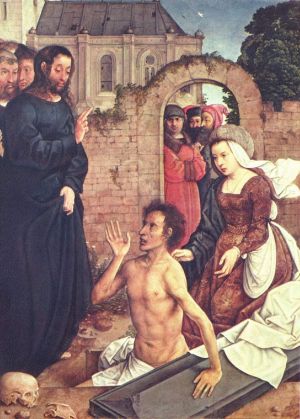 Resurrection of Lazarus by Juan de Flandes, around 1500

The name Lazarus (Hebrew: "God helped") refers to two separate individuals described in the New Testament: the first Lazarus is miraculously raised from the dead by Jesus (See Gospel of John 11:41-44); the other Lazarus is mentioned in a parable by Jesus about a poor man (Lazaurs) and a rich man (See Luke 16:19-31).

In addition to these biblical references, the term "Lazarus" has appeared in numerous literary and scientific writings often used to connote apparent restoration to life as in the scientific term "Lazarus taxon," which denotes organisms that reappear in the fossil record after a period of apparent extinction. In medical terminology, the term "Lazarus phenomenon" additionally refers to an event in which a person spontaneously returns to life (the heart starts beating again) after resuscitation has been given up.

In Christian theology, the biblical story of the raised Lazarus is often understood as a metaphor of Jesus' own power to redeem humanity as a whole from death and destruction. The scripture readings and hymns for Lazarus Saturday focus on the resurrection of Lazarus as a foreshadowing of the Resurrection of Christ, and a promise of the General Resurrection. 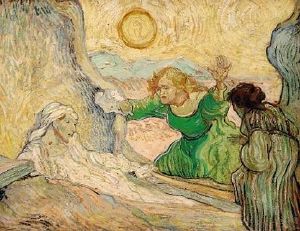 The Resurrection of Lazarus by Vincent van Gogh (after Rembrandt), 1889-90 (Auvers-sur-Oise, Paris).

The miracle of Lazarus

In the Gospel of John, Lazarus, also called Lazarus of Bethany or Lazarus of the Four Days, was a man who lived in the town of Bethany.[1] His sisters, Mary and Martha, sent word to Jesus that the one he loved was ill. Jesus delayed, and when he finally arrived it was found that Lazarus had been in the tomb for four days. Martha reproached him, and when Jesus assured her that Lazarus would rise, she thought he was referring to resurrection on Judgment Day. To this Jesus replied, "I am the resurrection, and the life: he that believeth in me, though he were dead, yet shall he live: And whosoever liveth and believeth in me shall never die".[2] In the presence of a crowd of Jewish mourners, Jesus had the stone rolled away from the tomb and bade Lazarus to come out. This he did, still wrapped in his grave-cloths. Jesus then called for his followers (friends and family alike) to remove the grave-cloths. The narrator claims many other Jews were convinced of Jesus' divinity after visiting Lazarus. Later, the chief priests consulted that they might put Lazarus to death.[3]

The parable of Lazarus 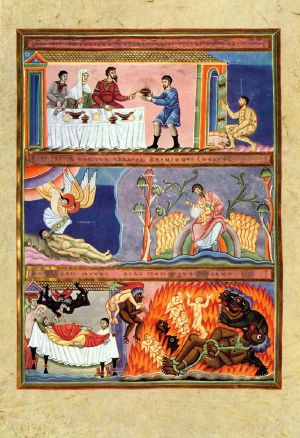 The New Testament also contains a parable about another Lazarus. In the Gospel of Luke 16:19–31, Lazarus is a beggar who lay outside the gate of a rich man, whom later tradition has given the name Dives—from the Latin for 'rich.' The rich man, it is said, dressed in fine clothing and dined sumptuously every day, but gave nothing to Lazarus. Both men died, and the beggar received his reward in the Hereafter, in Abraham's bosom at the everlasting banquet, while the rich man craved a drop of water from Lazarus' finger to cool his tongue as he was tormented with fire. Lazarus is the only person in a New Testament parable given a name; the rich man of the parable has been named Dives by tradition, although the name does not appear in Luke.

For the last century, "Catholic exegetes now commonly accept the story as a parable... The purpose of the parable is to teach the evil result of the neglect of others. Lazarus was rewarded, not because he was poor, but for his virtuous acceptance of poverty; the rich man was punished, not because he was rich, but for vicious neglect of the opportunities given him by his wealth."[4]

Some fundamentalist Protestants believe that the passage is not a parable at all, but a factual report, as it is the only story told by Jesus where there is no mention of it being a parable.[5] They also believe that the parable is a true account is the fact the beggar's name is given (Lazarus), something not done in any of Jesus' parables.

Others say that the name is given in this case because of the Hebrew meaning "God has helped." In their view, the meaning of this story is twofold: first, as noted above, to teach that God rewards according to the state of repentance of a man's life.[6] Second, to teach that that if people will not listen to the Bible or those preaching it,[7] that they would not listen even if someone was raised from the dead. This passage is key to the doctrine of the power of Scripture to save.[8]

The biblical stories about Lazarus the beggar and Lazarus the resurrected were combined in Romanesque iconography carved on portals in Burgundy and Provence.[9]

The thirteenth-century Golden Legend identifies Lazarus as the brother of Martha and Mary Magdalene,[10] One tradition reports that he fled to Cyprus, where he became the first bishop of Larnaka/Kittim, appointed directly by Paul and Saint Barnabas. It was claimed that the bishop's pallium was presented to Lazarus by the Virgin Mary, who had woven it herself. Such apostolic connections were central to the claims to autocephaly made by the bishops of Kittim—subject to the patriarch of Jerusalem—during the period 325–413 C.E. The church of Kittim was declared (or confirmed) self-governing in 413 C.E.

An alternative medieval tradition in the Golden Legend[11] sent Mary, Martha, and Lazarus to Gaul after the Ascension, in a ship without sails, oars or rudder. Provencal tradition, in particular, held Lazarus as the first bishop of Marseille. Pilgrims visited their tombs at the abbey of Vézelay in Burgundy. In the Abbey of the Trinity at Vendôme, a phylactery was said to contain a tear shed by Jesus at the tomb of Lazarus. The cathedral of Autun, not far away, is dedicated to Lazarus as Saint Lazare.

The first tomb of Lazarus in Bethany is a place of pilgrimage to this day.

Lazarus's second tomb is on Cyprus at the Greek Orthodox church of Agios Lazaros in Larnaka. In 890 C.E., his tomb was discovered bearing the inscription "Lazarus the friend of Christ." The marble sarcophagus can be seen inside the church under the Holy of Holies. His relics were taken from Cyprus to Constantinople in 898 C.E., although in 1972 human remains were discovered under the altar during renovation works in the church at Larnaka, and were identified with part of the saint's relics.

The relics were stolen from Constantinople by the Crusaders and transferred to France in 1204 C.E. as part of the booty of war from the Fourth Crusade.

The Military and Hospitaller Order of Saint Lazarus of Jerusalem is a religious/military order, purportedly dating back to the First Crusade. The Order is run by two distinct channels of authority, referred to as the Malta Obedience and the Paris Obedience. 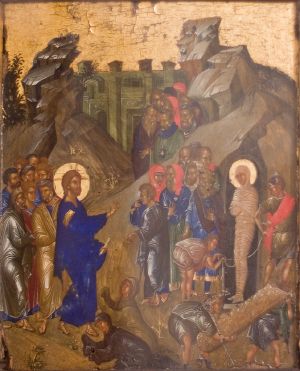 Lazarus of Bethany is honored as a saint by those Christian churches that keep the commemoration of saints, although on different days, according to local traditions.

In the Eastern Orthodox Church as well as the Byzantine Catholic Church, the day before Palm Sunday is celebrated as Lazarus Saturday. This day, together with Palm Sunday, hold a unique position in the church year, as days of joy and triumph between the penitence of Great Lent and the mourning of Holy Week.[12] During the preceding week, the hymns in the Lenten Triodion track the sickness and then the death of Lazarus, and Christ's journey from beyond Jordan to Bethany. The scripture readings and hymns for Lazarus Saturday focus on the resurrection of Lazarus as a foreshadowing of the Resurrection of Christ, and a promise of the General Resurrection. The Gospel narrative is interpreted in the hymns as illustrating the two natures of Christ: his humanity in asking, "Where have ye laid him?" (John 11:34), and his divinity by commanding Lazarus to come forth from the dead (John 11:43). Many of the Resurectional hymns of the normal Sunday service, which are omitted on Palm Sunday, are chanted on Lazarus Saturday. During the Divine Liturgy, the Baptismal Hymn, "As many as have been baptized into Christ have put on Christ" (Romans 6:3), is sung in place of the Trisagion. Although the forty days of Great Lent end on the day before Lazarus Saturday, the day is still observed as a fast; however, it is somewhat mitigated.

In the Roman Catholic Church, Saint Lazarus' memorial is on June 21. In Cuba, a major festival is dedicated to San Lázaro.

He is also commemorated in the Calendar of Saints of the Lutheran Church on July 29 together with Mary, sister of Lazarus, and Martha.

In Christian funerals the idea of the deceased being raised by the Lord as Lazarus was raised is often expressed in prayer.

Via syncretism, Lazarus has become an important figure in Santeria, standing in for the Yoruba deity Babalu Aye. Like the beggar of the Christian scriptures, Babalu-Aye represents someone covered with sores licked by dogs who was healed by divine intervention.[14][15] Silver charms known as the crutch of St. Lazarus or standard Roman Catholic-style medals of St. Lazarus are worn as talismans to invoke the aid of the syncretized deity in cases of medical suffering, particularly for people with AIDS.[14] In Santeria, the date associated with St. Lazarus is December 17,[15] despite Santeria's reliance on the iconography associated with the begging saint whose feast day is June 21.[13]

Well-known as an established tale, Lazarus has appeared countless times in music, writing and art. Some famous examples of his appearance in various cultural contexts are as follows: