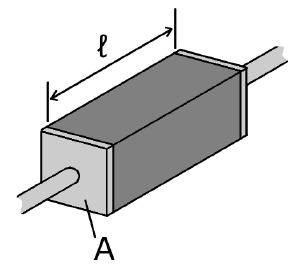 A piece of resistive material with electrical contacts on both ends.

The electrical resistivity ρ (rho) of a material is given by

is the length of the piece of material (measured in meters, m);
A is the cross-sectional area of the specimen (measured in square meters, m²).

Electrical resistivity can also be defined as

Finally, electrical resistivity is also defined as the inverse of the conductivity σ (sigma), of the material, or

*The numbers in this column increase or decrease the significand portion of the resistivity. For example, at 30°C (303.15 K), the resistivity of silver is 1.65×10−8. This is calculated as Δρ = α ΔT ρo where ρo is the resistivity at 20°C and α is the temperature coefficient

is the residual resistivity due to defect scattering, A is a constant that depends on the velocity of electrons at the fermi surface, the Debye radius and the number density of electrons in the metal.

An even better approximation of the temperature dependence of the resistivity of a semiconductor is given by the Steinhart–Hart equation:

where A, B and C are the so-called Steinhart–Hart coefficients.

This equation is used to calibrate thermistors.

In non-crystalline semi-conductors, conduction can occur by charges quantum tunnelling from one localized site to another. This is known as variable range hopping and has the characteristic form of

, where n=2,3,4 depending on the dimensionality of the system.

This knowledge is useful for long-distance overhead powerline transmission. Aluminum is used rather than copper because it is lighter for the same conductance. Calcium, while theoretically better, is rarely if ever used, due to its highly reactive nature.

Retrieved from https://www.newworldencyclopedia.org/p/index.php?title=Resistivity&oldid=1090985
Categories:
Hidden category:
This page was last edited on 8 December 2022, at 04:13.
Content is available under Creative Commons Attribution/Share-Alike License; additional terms may apply. See Terms of Use for details.