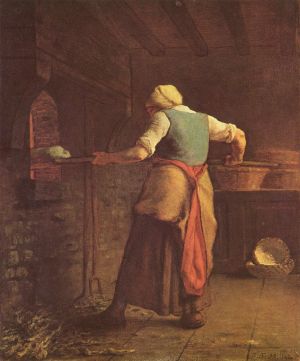 Oven depicted in a painting by Millet.

An oven is an enclosed chamber designed for heating, baking, or drying. Over the course of history, various types of ovens have been used for cooking. Some high-temperature ovens, known as kilns, are used to make ceramic products. Industrial ovens are used for a variety of applications, including chemical processing, food production, and electronics. 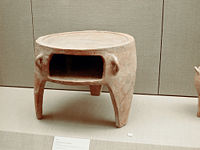 By 3200 B.C.E., settlements across the Indus Valley Civilization had an oven within each mud-brick house.[1]

Proper front-loaded bread ovens originated in ancient Greece, and culinary historians credit the Greeks for developing bread-baking into an art. The Greeks created a wide variety of doughs, loaf shapes, and styles of serving bread with other foods. Baking developed as a trade and profession, as bread was increasingly prepared outside of the family home by specially trained workers to be sold to the public. This is one of the oldest forms of professional food processing.

The Greeks also pioneered sweetbreads, fritters, puddings, cheesecakes, pastries, and even wedding cakes. Often prepared in symbolic shapes, these products were originally served during special occasions and ceremonies. By 300 C.E., the Greeks had developed over 70 different types of bread.

Types of ovens and their uses 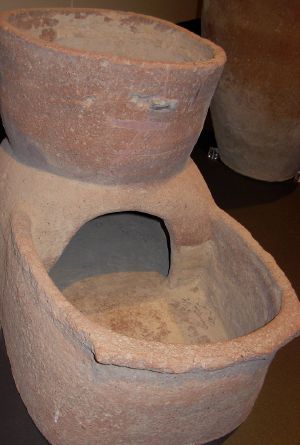 There are various types of ovens, some of which are noted below. 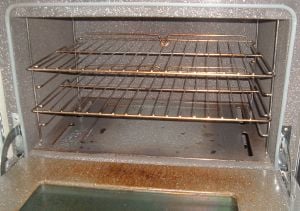 The inside of a modern kitchen oven.

In cooking, the conventional oven is a kitchen appliance. Food normally cooked in this manner includes meat, casseroles, bread, cake, and various desserts.

In the past, cooking ovens were fueled by wood or coal. Modern ovens are fueled by gas or electricity. When an oven is contained in a complete stove, the burners on the top of the stove may use fuel that is the same as or different from the fuel used by the oven.

Ovens have been designed for a variety of methods for cooking. A common method is to heat the oven from below, as when using the appliance for baking and roasting. The oven may also be able to heat from the top, to provide broiling. To provide faster cooking with evenly distributed heat, convection ovens use a small fan to blow hot air around the cooking chamber. An oven may also provide an integrated rotisserie.

Steam ovens introduce water (in the form of steam) into the cooking chamber. This can aid the formation of a crisp crust on baked goods and prevent the drying-out of fish and casseroles. The degree of humidity is usually selectable among at least several steps. Some steam ovens use water carried to the oven by the user in a container; others are permanently connected to the plumbing pipes.

Some modern ovens can combine thermal and microwave cooking. This feature can greatly speed the cooking of certain types of food while maintaining the traditional characteristics of oven cooking such as browning.

Ovens vary in the way they are controlled. The simplest ovens may not have any controls at all; several ovens simply run continuously at various temperatures. More conventional ovens have a simple thermostat that turns the oven on and off to maintain a pre-selected temperature. At the highest setting, the thermostat may also enable the broiler element. In addition, a timer may allow the oven to be turned on and off automatically, at pre-set times. More sophisticated ovens may have complex, computer-based controls, allowing a wide variety of operating modes and special features, including the use of a temperature probe to automatically shut the oven off when the food is completely cooked to the desired degree. Orthodox Jews may purchase ovens whose controls include a sabbath mode automation feature.

Some ovens are built with various aids to cleaning. Continuous cleaning ovens have the oven chamber coated with a catalytic surface that helps break down (oxidize) food splatters and spills over time. Self cleaning ovens use pyrolytic decomposition (extreme heat) to oxidize dirt. Steam ovens may provide a wet-soak cycle to loosen dirt, allowing easier manual removal. In the absence of any special methods, chemical oven cleaners are sometimes used or just old-fashioned scrubbing.