The Orinoco is one of the longest rivers in South America at 1,497.5 miles (2,410 kilometers) and one of the largest river systems in the world. Its vast drainage basin, sometimes called the Orinoquia (especially in Colombia) covers over 340,000 square miles (880,000 square kilometers), 76.3 percent of which is in Venezuela with the remainder in Colombia and Brazil. The name Orinoco means “a place to paddle” in the language of the Warao, an indigenous people inhabiting eastern Venezuela and western Guyana. The term Warao translates as "the boat people," styling after the Warao's lifelong and intimate connection to water.

The Orinoco River region is home to over one thousand species of birds, including the beautiful scarlet ibis, the bellbird, the umbrella bird, flamingos and colorful parrots. The great variety of fish includes electric eels, catfish often weighing over two hundred pounds, and the carnivorous piranha. The Amazon River Dolphin that can grow up to nine feet in length, boa constrictors, and caimans also inhabit the Orinoco River system. The Orinoco crocodile, reaching more than 20 feet, is one of the rarest reptiles in the world, with fewer than 250 specimens known to exist; its present-day range is restricted to the Orinoco River Basin.

Forming part of the border between Venezuela and Colombia, the Orinoco course flows in a wide ellipsoidal arc, surrounding the Guiana Shield, then entering the Atlantic Ocean near the island of Trinidad. It is divided into four stretches of unequal length that roughly correspond to the longitudinal zonation of a typical large river:

At its mouth it forms a wide delta that branches off into hundreds of rivers and waterways that flow through 15,830 square miles (41,000 km²) of swampy forests. In the rainy season the Orinoco can swell to a breadth of nearly 14 miles (22 km) and a depth of 328 feet (100 meters).

Most of the important Venezuelan rivers are tributaries of the Orinoco, the largest being the Caroní, which joins it at Puerto Ordaz, close to the Llovizna Falls. A peculiarity of the Orinoco river system is the Casiquiare canal, which starts as an arm of the Orinoco, and finds its way to the Rio Negro, a tributary of the Amazon, thus forming a “natural canal” between Orinoco and Amazon. 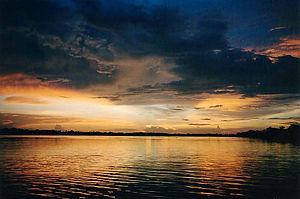 View from a boat in the Orinoco Delta, Venezuela, 2004

The Orinoco basin has a tropical climate with only slight changes in average temperatures throughout the year. However, unlike the temperatures, rainfall varies considerably and divides the year into only two seasons—a rainy winter season that runs from April through October or November and a dry summer season that lasts from November through March or April. The precipitation in the entire basin area varies greatly with the coastal regions receiving less than 20 inches and some inland areas receiving enough rainfall to be considered a rainforest. The Llanos, a treeless savannah, will be extremely dry from January through April with temperatures rising above 95 °F (35 °C), then experience flooding from June to October. Villavicencio, Colombia, an area near the Andes Mountains, receives the highest precipitation with 180 inches annually. Puerto de Nutrias, Venezuela, toward the central plains receives less, about 45 inches.

Many of the natural trees in the region have been reduced greatly by deforestation. Surviving in the open savanna are mainly trees that have adapted to the dry conditions, such as the chaparro (scrub oak) and the dwarf palm, as well as sedges and swamp grasses. Along the river growing in rich alluvial soil are the morichales, named for the miriti or moriche palm.

There are over one thousand species of birds found in the region, such as the scarlet ibis, umbrella bird, bellbird, flamingos, and colorful parrots. Fish are plentiful as well with electric eels, catfish often weighing over 200 pounds, and the Caribe Piranha or Pygocentrus cariba. (Usually considered the most aggressive piranha of the Characidae family.) The Boto, also known as the Amazon River Dolphin that can grow up to nine feet in length, boa constrictors, and caimans are also known to inhabit the Orinoco River system. The Orinoco Crocodile, reaching more than 20 feet, is one of the rarest reptiles in the world, with fewer than 250 specimens known to exist in the wild. Its present-day range is restricted to the Orinoco River Basin.

The Highlands are rich in mineral deposits such as iron ore, manganese, nickel, vanadium, bauxite, and chrome. There also are deposits of gold and diamonds. Petroleum and natural gas deposits are abundant in the delta area.

Major rivers in the Orinoco Basin 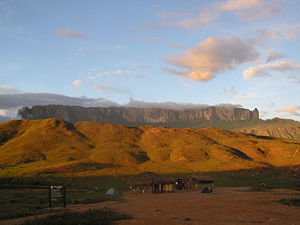 Mt Roraima in the Guiana Shield in Venezuela

The huge Orinoco river basin is estimated between 880,000 and 1,200,000 square kilometers. Huge tropical forests cover the southwestern section of the basin. Much of it is inaccessible. North of the Orinoco are vast, grassy plains known as llanos.

The Guiana Highlands, also known as the Guiana Shield, covers the remainder of the area. The Guiana Shield forms a portion of the northern coast of the continent. It is a two billion-year-old Precambrian geological formation, possibly the oldest on the planet, that hosts the impressive and mysterious table-like mountains called tepuis. Its highlands are the source of some of the world's most spectacular waterfalls such as Angel Falls, Kaieteur Falls and Kuquenan Falls. The Shield is overlain by the largest expanse of undisturbed tropical rain forest in the world. Guianan rain forest is similar in nature to Amazonian rain forest and known Protected Areas include those mentioned above and the Iwokrama Forest of central Guyana and the Kanuku National Park of southern Guyana. 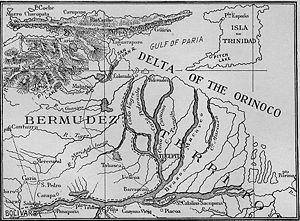 Although the mouth of the Orinoco in the Atlantic Ocean was discovered by Christopher Columbus on his third voyage (1498), its source at the Cerro Delgado-Chalbaud, in the Parima range, on the Venezuelan-Brazilian border, at 1,047 meters of elevation ({{#invoke:Coordinates|coord}}{{#coordinates:02|19|05|N|63|21|42|W| | |name= }}), was only explored in 1951—453 years later—by a joint Venezuelan-French team.

The delta of the Orinoco, and tributaries in the eastern llanos such as the Apure and Meta, were explored in the sixteenth century by German expeditions under Ambrosius Ehinger and his successors. In 1531 Diego de Ordaz, beginning at the principal outlet in the delta, the Boca de Navios, sailed up the river to the Meta, and Antonio de Berrio sailed down the Casanare, to the Meta, and then down the Orinoco and back to Coro.

Alexander von Humboldt explored the basin in 1800, reporting on the pink river dolphins, and publishing extensively on the flora and fauna.[3]

Prior to the mid-1900s, mainly small villages, missionary stations, and ranches, better known as hatos (haciendas), existed along the rivers of the region. Industrial and urban development came about in 1937 at El Tigre and in 1948 in Barinas when oil and gas were struck. Agriculture began to increase and expand in the 1950s and a concentration of small farms developed around Barinas, Guanare, San Fernando de Apure, and Acarigua in Venezuela. Built on higher ground to escape the seasonal flooding, towns in the Venezuelan Llanos were built similar to those in Spain with the streets in a grid pattern surrounding the central plaza. Populations often rose to over ten thousand. The Colombian Llanos region was not as populated except in the area near Ciudad Guayana in the Guiana Highlands. 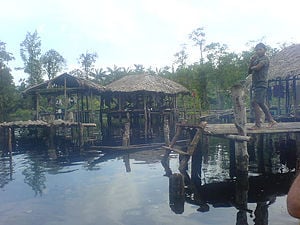 Warao Indians on Venezuela's Orinoco Delta outside their homes

Most of the indigenous population lives within the Orinoco River Basin, with the exception of the Guajiros of Lake Maracaibo. The groups include the Warrau (Waroa) who live in the delta region in palaftos, small wooden structures built on stilts over water, the Guaica (Waica) and the Maquiritare (Makiritare) who live in the southern uplands, the Guahibo and the Yaruro who live in the western Llanos, and the Yanomami who live in round wood and thatch houses called shabonos. These indigenous tribes have lived in union with the rivers relying on them for food, transportation, and communication for centuries.

The river is navigable for most of its length. Large river steamers carry cargo as far as Puerto Ayacucho and the Atures Rapids, a distance of 700 miles (1,127 kilometers) from the delta. Dredging enables ocean vessels to travel 270 miles (435 kilometers) upstream as far as the commercial port and industrial city of Ciudad Bolívar, the confluence of the Caroní River, in order to mine iron ore deposits. The Orinoco deposits contain extensive tar sands in the Orinoco oil belt, which may be a source of future oil production.[4]

Since World War II, many roads have been constructed in the Venezuelan Llanos as well as have two important bridges. One is the mile-long bridge across the Orinoco River at Ciudad Bolívar connecting the Llanos and the Guiana region, and a second bridge connecting the old Orinoco port of San Félix with the new industrial town of Puerto Ordaz. The bridges were completed in the 1960s.

The vast tropical grasslands of the Llanos have been used mainly for cattle farming, but soil degradation resulting from overgrazing has become a major concern. A major change in industrial growth was made possible by the building of the Macagua and Guri dams and has made Ciudad Guayana a center for the production of aluminum, paper and steel, causing concerns about pollution to the region.

On the international level, there is concern about the control over Venezuela’s last privately run oil field by President Hugo Chavez’s government. The area around El Tigre, known as the Orinoco Oil Belt, possesses the world's biggest petroleum reserves—1.3 trillion barrels of extra-heavy crude oil. Chavez claims that for Venezuela to be a socialist state it must have control over its natural resources. Commercial companies believe they still have some leverage due to the fact that without their experience, Venezuela’s inefficient state oil company cannot transform Orinoco’s tar-like crude into oil that is marketable. Chavez is also nationalizing electrical companies and the country's biggest telecommunications company.[5]