Coordinates: 24°35′33″N 72°42′30″E﻿ / ﻿24.5925, 72.7083 Mount Abu, the highest peak in the Aravalli Range of the state of Rajasthan in western India, located in the state's Sirohi district. The mountain forms a distinct rocky plateau 22 km long by 9 km wide, and the highest peak on the mountain is Guru Shikhar, located at a height of 1,722 meters above sea level. Mount Abu is also the only hill-station in Rajasthan, often referred to as "an oasis in the desert." as its heights serve as home to rivers, lakes, waterfalls, and evergreen forests, in a region of India known for its dry climate and terrain.

Mount Abu's flora and fauna life compliments its rich spiritual heritage. An oasis in the midst of a desert, Mount Abu has attracted Hindu and Jain holy people for centuries. During the eleventh through sixteenth centuries, Jainism constructed numerous remarkable temples. Before that, Hinduism constructed temples and convents for the devotee and holy person. Typically, Buddhism would seek out locations like Mount Abu for monasteries and temples but Hinduism and Jainism staked out the mountain for their faiths. The building programs, and spiritual programs, of Hinduism and Islam coincided with the sweep of the Islamic and Mongol armies through the area of northwest India. That the temples and holy shrines survived the sweep of Muslim and Mongol armies in itself is miraculous.

In the Puranas, the region had been referred to as Arbudaranya, ("forest of Arbhu") and the current designation of "Abu" is simply a shortened version of this ancient name. It is believed that the sage Vasishtha retired to the southern spur of Mount Abu following his differences with the sage Vishvamitra.

In more modern times, the history of the area is also quite diverse. It was once a part of the Chauhan kingdom of Rajasthan and served as a summer resort for the Rajput kings who ruled over the region. It was later leased by the British government from the Maharaja of Sirohi for use as the headquarters of their ambassador to Rajputana, (another name for Rajasthan).

Throughout British rule in India, Mount Abu served as one of the favorite summer destinations of the British, who often came to escape the dusty, dry heat of the Rajasthani desert and plains. The sight also served as a sanatorium for some of the troops who were stationed nearby.

The mountain is also one of the most revered sights for Jains, since Jain scriptures record that Lord Mahavira, the twenty-fourth Jain Tirthankara (spiritual leader), also visited Mount Abu and gave his blessing to the mountain and the surrounding city.

The town of Mount Abu, the only hill station in Rajasthan, is located at an elevation of 1,220 meters. It has been a popular retreat from the intense heat of Rajasthan and neighboring Gujarat for centuries. The Mount Abu Wildlife Sanctuary was established in 1960 and covers about 290 km² of the mountain.

Mount Abu is well known for its numerous beautiful Jain temples. These include the Dilwara Temples, which are a complex of temples carved out of white marble, that were built between the eleventh and thirteenth centuries. The oldest of these is the Vimal Vasahi temple, built in 1031 by Vimal Shah and dedicated to the first of the Jain Tirthankaras. The Lun Vasahi Temple was built in 1231 by the brothers Vastupal and Tejpal, who belonged to the Porwal Jain community. 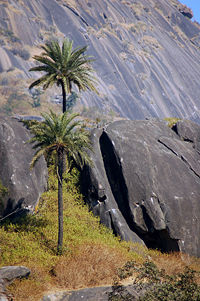 The Achalgarh Fort, built in the 14th century by Rana Kumbha of Mewar, also stands nearby. It encloses several beautiful Jain temples, including the Achaleswar Mahadev Temple built in 1412 and the Kantinath Temple, built in 1513.

Nakki Lake is another popular visitor attraction of Mount Abu. Toad Rock stands on a hill near the lake, while the Raghunath Temple and Maharaja Jaipur Palace were also constructed on hills near Nakki Lake.

In addition to its many Jain sites, the mountain is also home to several Hindu temples, including the Adhar Devi Temple, carved out of solid rock, the Shri Raghunathji Temple, and a shrine and temple to Dattatreya built atop the Guru Shikhar peak. The world headquarters of the Brahma Kumaris World Spiritual Organisation is also located here, as is the World Spiritual University of the same denomination. In Hindu mythology, it is also believed that there is a footprint of Vishnu imprinted at the top of Mount Abu. The Ambika Mata Temple dedicated to the goddess Durga, also lies in a cleft of rock in Jagat, just outside of Mount Abu. 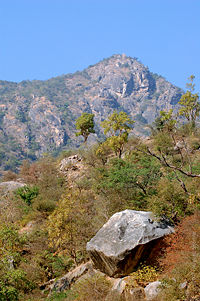 On the way to Mount Abu, Rajasthan.

Mount Abu has the distinction of being named a "wildlife sanctuary," due to its abundant variety of both wildlife and plants. It is very rich in floral bio-diversity, starting from its sub-tropical thorn forests in the foot hills and extending into its sub-tropical evergreen forests that extend along the area's water courses and valleys.

In total, there are about 112 plant families with 449 genera and 820 species in the region. Mount Abu is also the only place in Rajasthan where it is possible to observe a variety of different orchids. In addition, three species of wild roses and a over 16 other species of rare flowers have been reported in or around the mountain. The south-western part of the sanctuary is rich in bamboo forests. About 81 species of trees, 89 species of shrubs, 28 species of climbers, and 17 species of tuberous plants of medicinal importance have been identified in the area around Mount Abu, making it an important natural reserve in India.

Along with its plant life, Mount Abu has a large wildlife presence, including several highly rare, threatened and endangered species. Mount Abu served as one of the historic homes of the Asiatic lion (last recorded in 1872) as well as the tiger (last reported in 1970), but today, the leopard is the main predator in the area. Other animals found here include: sambhars, jungle cats, small Indian civets, wolves, hyenas, jackals, Indian foxes, wild boars, pangolins, mongooses, Indian hares, porcupines and hedgehogs. The sanctuary also provides an ideal habitat for the sloth bear, which is a small variety of bear that is mostly found in South Asia. In addition to these animals, Mount Abu also serves as a major home for a variety of birds, with over 250 species reported to be living in the area.

Transport to Mount Abu is available through a number of ways, including by air, rail, and road. By air, the nearest airport is located in Udaipur, and can be reached via the daily flights from Delhi, Mumbai and Jaipur. The nearest railway station is at Abu Road, in the lowlands southeast of the mountain. The station is on the main Indian Railways line between Delhi and Ahmedabad. By roads, there is a deluxe bus service provided by Rajasthan Roadways, which is available from Jaipur as well as Delhi, Udaipur, Ajmer, Bundi, and Udaipur.