Mount Ararat (Turkish: Ağrı Dağı, Armenian: Արարատ, Kurdish: Agirî, Greek: Ἀραράτ, Persian: آرارات‎, Georgian: არარატის, Azeri: Ağrıdağ, Hebrew: אֲרָרָט, Tiberian Hebrew: ʾĂrārāṭ) is the tallest peak in modern Turkey at 5,137 meters (16,854 ft). This snow-capped, dormant volcanic cone is located in the Iğdır Province, near the northeast corner of Turkey, 16 km west of the Iranian and 32 km south of the Armenian border. The name Ağrı in Turkish is said to be derived from Agir in Kurdish meaning fire, referring to Ararat being a volcano. This derivation is uncertain, since there is no historical record of when the volcano was last active and which tribes lived in the vicinity at that time.

Technically, Ararat is a stratovolcano, formed of lava flows and pyroclastic ejecta. A smaller (3,896m) cone, Mount "Sis," also known as "Little Ararat," rises from the same base, southeast of the main peak (Armenians sometimes call the higher peak "Masis"). The lava plateau stretches out between the two pinnacles. Its northern and eastern slopes rise from the broad alluvial plain of the Aras River. The last activity on the mountain was a major earthquake in July 1840 centered around the Ahora Gorge, a northeast trending chasm that drops 1,825 meters (6,000 ft) from the top of the mountain.

The Book of Genesis identifies the "mountains of Ararat" as the resting place of Noah's Ark after the Great Flood described in its text. The Sumerian Epic of Gilgamesh (c. 2000 B.C.E.) also describes a great flood, as does the later record of Berossus (3rd century B.C.E.) and the Koran.

Mt. Ararat is sacred to the Armenians, who believe themselves to be the first race of humans to appear in the world after the Deluge. A Persian legend refers to the Ararat as the cradle of the human race. There was formerly a village on the slopes of the Ararat high above the Aras plain, at the spot where, according to local tradition, Noah built an altar and planted the first vineyard. 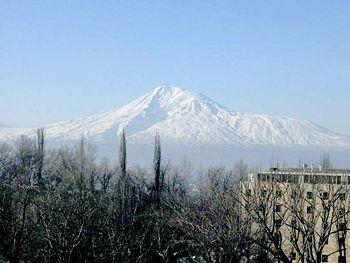 Over the centuries, Mount Ararat has been passed back and forth like a ping-pong ball between political bodies. The first unified state to rule the region surrounding the mountain was ancient Urartu. After the decline of Urartu following invasions by Scythians and the Medes in 585 B.C.E., a semi-independent Armenian state emerged under the rule of the Orontid Dynasty, the members of which frequently intermarried with their overlords, the Achaemenid Persians. After the defeat of the Achaemenids by Alexander the Great in 330 B.C.E., the Orontids gained autonomy, albeit under Macedonian influence.

Antiochus the Great ended Orontid rule in the region when he subjugated Armenia in 201 B.C.E. After the defeat of Antiochus in the Battle of Magnesia, a new independent Armenian Kingdom emerged in 198 B.C.E. that lasted for over six centuries until 428, briefly being annexed to the Roman Empire by Trajan from 114 to 118. Following the partition of the Armenian Kingdom between the Roman Empire and Sassanid Persia in 428, the region was a constant battleground between the two, and afterwards between the Arab Caliphate and the Byzantine Empire.

Ararat was retaken by a new Armenian Kingdom under the Bagratuni Dynasty early in the ninth century C.E., which was annexed by Byzantium in 1045, and then lost the territory to the Seljuk Turks following the Battle of Manzikert in 1071. The Georgian Kingdom took the region from the Seljuks from the late twelfth century to the early thirteenth century, until various Mongol rulers of the Ilkhanate, including Tamerlane, took control of the area in the thirteenth and fourteenth centuries. The region was conquered by the Ottoman Empire in 1517 and eventually taken by the Safavids. 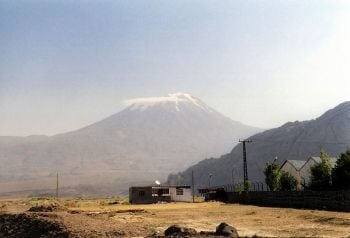 Dr. Friedrich Parrot, with the help of Khachatur Abovian, was the first explorer in modern times to reach the summit of Mount Ararat, with the onset of Russian rule in 1829. He was followed in 1856 by a group of five explorers led by Major Robert Stuart.

In 1918, in the aftermath of World War I, the fall of the Ottoman Empire and the October Revolution, the area became part of the Democratic Republic of Armenia, but the republic was short-lived. With the invasion of the Soviet Red Army, the area became part of the Soviet Union. Following the Treaty of Kars in 1923, the area was divided between Turkey and the USSR, and the new border, which became internationally recognized, placed Ararat on the Turkish side. Even after this, most Armenians still claimed the mountain. At that time, Armenia was joined together with Georgia and Azerbaijan under the Transcaucasian SFSR. When the TSFSR was dissolved in 1936 and each of the three countries became separate Soviet Republics (Armenian SSR, Azerbaijan SSR, and Georgian SSR), Armenia depicted Ararat on its coat of arms. Turkey protested against this symbolic gesture on the grounds that Ararat was part of its territory, but the Kremlin refused to take action. When Armenia regained its independence from the crumbling Soviet Union in 1991, it formally stated that it did not recognize the Treaty of Kars. 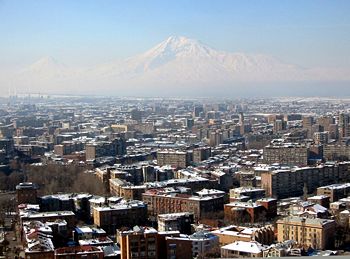 Ararat rises from a flat plain and dominates the skyline of Armenia's capital, Yerevan. Since ancient times, Ararat has been revered by the Armenians as their spiritual home. Today, it is the national symbol of Armenia, where it is sometimes called Masis (Մասիս). Mount Ararat is featured in the center of the Coat of Arms of Armenia. The mountain is often depicted by Armenian artists on paintings, obsidian engravings, backgammon boards and other artifacts. From Yerevan, and throughout much of the country, citizens and tourists get a clear glimpse of both peaks, Mount Ararat and Little Ararat (Sis). Khor Virap, a monastery located just across the border from Turkey, is particularly popular with tourists for its view of the volcano.

The Kurds known as Celali, (pronounced “jee-lah-lee”) live a semi-nomadic existence farming sheep on the southern slopes of Ararat. They are part of the 25 million Kurds that live over a five country area. Within this population many ethnic tribes have evolved and the Celali have emerged as one of the largest and strongest, with notoriety for being accomplished fighters. They are predominantly based in the region around the town of Dogubeyazit, the nearest town to Mount Ararat. The language spoken by the Celali is Kurmanji.

The climb is long, but there is a fairly easy route from the South in late summer for climbers who are familiar with the use of axe and crampons. There are two possible campsites on the mountain, and the glacier begins around 4,800 meters. It is difficult for non-Turkish nationals to obtain permission to climb from the Turkish authorities. The process of obtaining permission is quite complicated.

The Ararat anomaly is an object appearing on photographs of the snowfields at the summit of Mount Ararat. Many members of the Christian, Jewish, and Islamic faiths believe that the anomaly is in fact Noah's Ark, the discovery of which would help validate their belief in the literal truth of their holy texts. This ship-shaped feature, resembling a ship's superstructure, has been sized by one satellite imaging expert at 309 meters (1,015 feet) long, as large as today's largest aircraft carriers and would dwarf the Titanic and German battleship Bismarck.

The anomaly is located on the northwest corner of the Western Plateau of Mount Ararat (approximately 39°42.1′N 44°16.3′E) at about 15,500 feet (4,724 meters), some 2.2 kilometers west of the summit, on what appears in photographs to be a steep downward slope. It was first filmed during a U.S. Air Force aerial reconnaissance mission in 1949 - the Ararat massif sits on the Turkish/Soviet border, and was thus an area of military interest. The film was given a routine classification of "Secret" as were subsequent photographs taken in 1956, 1973, 1976, 1990 and 1992, by aircraft and satellites. Six frames from the 1949 footage were released in 1995 under the Freedom of Information Act to Porcher Taylor, a scholar at the Washington-based Center for Strategic and International Studies specializing in satellite intelligence and diplomacy.

A joint research project was later established between Insight Magazine and Space Imaging (now GeoEye), using the IKONOS satellite. IKONOS, on its maiden voyage, captured the anomaly twice in 2000. The Mount Ararat area also has been imaged by France's SPOT satellite in 1989, Landsat in the 1970s and NASA's Space shuttle in 1994, as well as military satellite images captured by the CIA's KH-9 (Keyhole 9) in 1973 and KH-11 (Keyhole 11) in 1976 and 1990–1992. 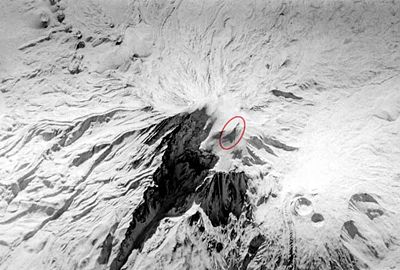 Apollo 15 moonwalker James Irwin was also repeatedly drawn to Mount Ararat in hopes of finding Ark wreckage. Through his High Flight Foundation, a non-profit evangelical organization based in Colorado Springs, the former astronaut made six treks to Mount Ararat in an unsuccessful quest to find remains of the ark.

Irwin's last expedition in 1990 ran into trouble. Turkish police detained him following allegations that he engaged in spying while looking for the Ark.

The "Noah's Ark" claims are not taken seriously by mainstream archaeology. The Defence Intelligence Agency, which has custody of the images, has analyzed the anomaly as showing "linear facades in the glacial ice underlying more recently accumulated ice and snow."[1]

In 1991 the mountain was closed due to Turkish military operations against Kurdish rebels in the area.

The Ararat anomaly is frequently confused with the Durupinar site, a feature some 18 miles from the mountain claimed by adventurer Ron Wyatt and his associate David Fasold to be the genuine original Noah's Ark.[2] Formations similar to the Durupinar site are common in the Ararat area, and have been identified as being of geological origin.[3]

Robert Cornuke, a biblical archaeologist, believes the ark actually landed in the Zagros Mountains in Iran and has explored this area in an effort to prove his controversial theory.[4]

Retrieved from https://www.newworldencyclopedia.org/p/index.php?title=Mount_Ararat&oldid=1086769
Categories:
Hidden category:
This page was last edited on 10 November 2022, at 17:03.
Content is available under Creative Commons Attribution/Share-Alike License; additional terms may apply. See Terms of Use for details.