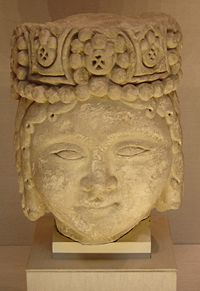 The Seljuqs (also Seljuk or Seljuq Turks) were a Muslim dynasty of originally Oghuz Turkic descent that ruled parts of Central Asia and the Middle East from the eleventh to fourteenth centuries. They set up an empire known as "Great Seljuk Empire" that stretched from Anatolia to Punjab and was the target of the First Crusade. Increasingly fractured by fighting among independent Seljuk principalities, the once great Seljuk Empire was weakened during the first two crusades, gave way to the Ayyubid dynasty under Saladin, and finally crumbled during the Mongol invasions. It was ultimately succeeded by the Ottoman Empire, which inherited much of his cultural foundation.

The dynasty marked the beginning of Turkic power in the Middle East. The Seljuks are regarded as the cultural ancestors of the Western Turks, the present-day inhabitants of Azerbaijan, Turkey, and Turkmenistan. They are also remembered as great patrons of Persian culture, art, literature, and language.[1][2]

Originally, the House of Seljuq was a branch of the Kinik Oghuz Turks who in the ninth century lived on the periphery of the Muslim world, north of the Caspian and Aral seas.[3] In the tenth century the Seljuqs migrated from their ancestral homelands into mainland Persia, where they adopted the Persian culture and language in the following decades.

The traditional ancestor of the Seljuqs was their bey (cheiftan) Seljuq who was reputed to have served in the Khazar army, under whom, the Seljuks migrated to Khwarezm, near the city of Jend also called Khujand circa 950 C.E., where they converted to Islam.[3]

The Seljuqs were allied with the Persian Samanid Shahs against the Qarakhanids. The Samanids however fell to the Qarakhanids and the emergence of the Ghaznavids and were involved in the power struggle in the region before establishing their own independent base. 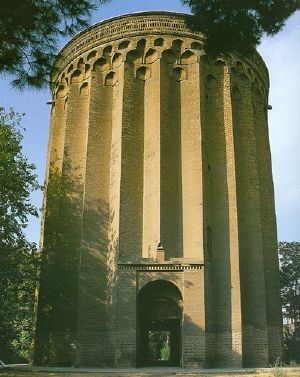 Toğrül Bey (c. 990 – September 4, 1063) was the grandson of Seljuk. He united the Turkomen warriors of the Great Eurasian Steppes into a confederacy of tribes. He and his brother Çağrı wrested the empire from the Ghaznavids. Initially the Seljuks were repulsed by Mahmud and retired to Khwarezm but Toğrül and Çağrı led them to capture Merv and Nishapur (1028-1029). Later they repeatedly raided and traded territory with his successors across Khorasan and Balkh and even sacked Ghazni in 1037. In 1039 at Battle of Dandanaqan they decisively defeated Mas'ud I of the Ghaznavids resulting in him abandoning most of his western territories to the Seljuks. In 1055 Toğrül captured Baghdad from the Shi'a Buyids under a commission from the Abbasids.

Alp Arslan was the son of Çağrı and expanded significantly upon Toğrül's holdings by adding Armenia and Georgia in 1064 and invading the Byzantine Empire in 1068 from whom he annexed Anatolia after defeating them at the Battle of Manzikert. He ordered his Turkoman generals to conquer the Byzantine lands and allowed them to carve principalities of their own as atabegs that were loyal to him. Within two years the Turkomans captured Asia Minor and went as far as the Aegean Sea establishing numerous "beghliks" such as: the Saltuqis in Northeastern Anatolia, Mengujeqs in Eastern Anatolia, Artuqids in Southeastern Anatolia, Danishmendis in Central Anatolia, Rum Seljuks (Beghlik of Süleyman, which later moved to Central Anatolia) in Western Anatolia and the Beghlik of Çaka Bey in İzmir (Smyrna).

Under Alp Arslan's successor, Malikshāh, and his two Persian viziers,[4] Nizām al-Mulk and Tāj al-Mulk, the Seljuk state expanded in various directions to former the Persian border before the Arab invasion, so that it bordered China in the East and the Byzantines in the West.

He moved the capital from Rayy to Isfahan. The Iqta mililtary system and the Nizāmīyyah University at Baghdad were established by Nizām al-Mulk, and the reign of Malikshāh was reckoned the golden age of "Great Seljuk." The Abbasid Caliph titled him "The Sultan of the East and West" in 1087. The Assassins of Hassan-e Sabāh however started to become a force during his era and assassinated many leading figures in his administration. 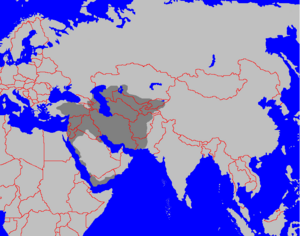 Seljuqs at the time of their largest extent.

The Seljuk power was at its zenith under Malikshāh I, and both the Qarakhanids and Ghaznavids had to acknowledge the overlordship of the Seljuks. The Seljuk dominion was established over the ancient Sassanid domains, in Iran and Iraq, and included Anatolia as well as parts of Central Asia and modern Afghanistan. The Seljuk rule was modeled after the tribal organization brought in by the nomadic conquerors and resembled a 'family federation' or 'appanage state'. Under this organization the leading member of the paramount family assigned family members portions of his domains as autonomous appanages.[5]

When Malikshāh I died in 1092, the empire split as his brother and four sons quarreled over the apportioning of the empire among themselves. In Anatolia, Malikshāh I was succeeded by Kilij Arslan I who founded the Sultanate of Rum and in Syria by his brother Tutush I. In Persia he was succeeded by his son Mahmud I whose reign was contested by his other three brothers Barkiyaruq in Iraq, Muhammad I in Baghdad and Ahmad Sanjar in Khorasan.

When Tutush I died his sons Radwan and Duqaq inherited Aleppo and Damascus respectively and contested each other as well, further dividing Syria amongst emirs antagonistic towards each other.

In 1118, the third son Ahmad Sanjar took over the empire. His nephew, the son of Muhammad I did not recognize his claim to the throne and Mahmud II proclaimed himself Sultan and established a capital in Baghdad, until 1131 when he was finally officially deposed by Ahmad Sanjar.

Elsewhere in nominal Seljuk territory were the Artuqids in northeastern Syria and northern Mesopotamia. They controlled Jerusalem until 1098. In eastern Anatolia and northern Syria a state was founded by the Dānišmand dynasty, and contested land with the Sultanate of Rum and Kerbogha exercised greeted independence as the atabeg of Mosul. 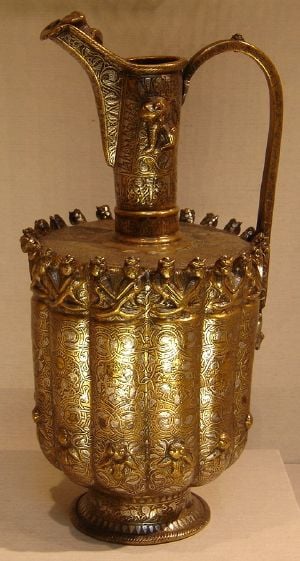 The Seljuks had already lost Palestine to the Fatimids before their capture by the crusaders. The fractured states of the Seljuks were thus, on the whole, more concerned with consolidating their own territories and gaining control of their neighbors than with cooperating against the crusaders when the First Crusade arrived in 1095 and successfully captured the Holy land to set up the Crusader States.

Before and during the Second Crusade, Ahmed Sanjar had to contend with revolts of Qarakhanids in Transoxiana, Ghorids in Afghanistan and Qarluks in modern Kyrghyzstan, even as the nomadic Kara-Khitais invaded the East, destroying the Seljuk vassal state of the Eastern Qarakhanids. At the Battle of Qatwan of 1141, Sanjar lost all his eastern provinces up to the Syr Darya River.

During this time, conflict with the crusader states was intermittent, and after the First Crusade, the increasingly independent atabegs (governors) would frequently ally with the crusader states against other atabegs as they vied against each other for territory. At Mosul, Zengi succeeded Kerbogha as atabeg and successfully began the process of consolidating the atabegs of Syria. In 1144 Zengi captured Edessa, as the County of Edessa had allied itself with the Ortoqids against him. This event triggered the launch of the second crusade. Nur ad-Din, one of Zengi's sons who succeeded him as atabeg of Aleppo and created an alliance in the region to oppose the Second Crusade which arrived in 1147.

In 1153 the Oghuz Turks rebelled and captured Sanjar, who managed to escape after three years, but died within a year. Despite several attempts to reunite the Seljuks by his successors, the Crusades prevented them from regaining their former empire. Atabegs such as the Zengids and Artuqids were only nominally under the Seljuk sultan, they basically controlled Syria independently. Ahmed Sanjar's death in 1156 fractured the empire even further, rendering the atabegs effectively independent:

After the Second Crusade, Nur ad-Din's general Shirkuh, who had established himself in Egypt on Fatimid land, was succeeded by Saladin who then rebelled against Nur ad-Din. Upon Nur ad-Din's death, Saladin married his widow and captured most of Syria, creating the Ayyubid dynasty. 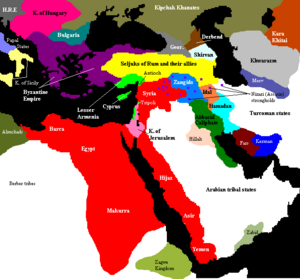 On other fronts the Kingdom of Georgia emerged as a regional power and extended its borders at the expense of Great Seljuk as did the revival of the Armenian Kingdom of Cilicia under Leo II of Armenia in Anatolia. The Abbasid caliph An-Nasir also began to reassert the authority of the caliph and allied himself with the Khwarezmshah Ala ad-Din Tekish.

Toğrül III succeeded briefly in consolidating Seljuk power under his sultanate, with the notable exception of Anatolia. In 1194 Toğrül was defeated by Ala ad-Din Tekish, the shah of Khwarezmid Empire, and the Seljuk finally collapsed. Of the former Seljuk Empire, only the Sultanate of Rüm in Anatolia remained. As the dynasty declined further in the middle of the thirteenth century, the Mongols invaded Anatolia in the 1260s and divided it into small emirates called the Anatolian beyliks, one of which, the Ottoman, would rise to power and conquer the rest.

Kerman was a nation in southern Persia. It fell in 1187, probably conquered by Toğrül III of Great Seljuk.