Coordinates: 26°55′N 70°54′E﻿ / ﻿26.92, 70.9 Jaisalmer pronunciation ▶ (Hindi: जैसालमेर), nicknamed "The Golden City," is a town in the state of Rajasthan in north India. The town stands on a ridge of yellowish sandstone and is crowned by a fort, which contains the palace and several ornate Jain temples. Many of the houses and temples are finely sculptured, giving the whole city a majestic and beautiful appearance. Jaisalmer lies in the heart of the Thar Desert and has a population of about 78,000, and serves as the administrative headquarters of Jaisalmer District.

The town is named after its founder Rawal Jaisal, and the full name "Jaisalmer" means "the Hill Fort of Jaisal." Jaisalmer is also known as "the Golden City" of India because the yellow sandstone (from which it is built) combined with the sands of the Thar Desert provides a yellowish-golden touch to the city and its surrounding area.

The majority of the inhabitants of Jaisalmer are Bhati Rajputs, who take their name from an ancestor named Bhatti, a man who was renowned as a warrior when his tribe was located in area of Punjab. The major opponents of the Bhati Rajputs were the powerful Rathor clans of Jodhpur and Bikaner. The two groups used to fight battles for possession of forts, waterholes, and cattle. Jaisalmer was positioned strategically and was a halting point along a traditional trade route traversed by the camel caravans of Indian and Asian merchants. The route linked India to Central Asia, Egypt, Arabia, Persia, Africa, and the West. During Bhatti's lifetime, the clan was driven southwards, and found a refuge in the Indian desert, which eventually became its home. Deoraj, a famous prince of the Bhati family, is considered the true founder of the Jaisalmer dynasty, and with him the title of "rawal" was created. In 1156, Rawal Jaisal, the sixth in succession from Deoraj, founded the fort and city of Jaisalmer and made it his capital when he moved from his former capital at Lodhruva (which is situated about 15 km to the south-east of Jaisalmer).

During the Islamic invasion of India, Jaisalmer escaped direct Muslim conquest due to its geographical situation in the desert region. The Rawals of Jaisalmer agreed to pay an annual tribute to the Delhi Sultans, protecting them and providing them with a level of autonomy. However, the first siege of Jaisalmer occurred during the reign of Allaud-din Khilji. It was provoked by the Bhati's raid on a caravan filled with treasure in 1294, which so enraged the emperor Allaud-din Khilji that his army captured and sacked the fort and city of Jaisalmer, leaving the area entirely empty and deserted. After this time, no records were kept in the area until the time of Rawal Sahal Singh, whose reign marked an epoch in Bhati history in that he acknowledged the supremacy of the Mughal emperor Shah Jahan. The Jaisalmer princes had now arrived at the height of their power, but from this time till the accession of Rawal Mulraj in 1762, the fortunes of the state rapidly declined, and most of its outlying provinces were lost. In 1818, Mulraj entered into political relations with the British.

Jaisalmer was one of the last states to sign a treaty with the British. During the British Raj, Jaisalmer was the seat of a princely state of the same name, ruled by the Bhati clan of rajputs. Today, although the city is under the governance of the Government of India, a lot of welfare work is carried out by Brijraj Singh, who is a descendant of the Bhati Rajputs. In general, the Royal Family still commands a lot of respect from the people, even though their leadership is no longer the highest authority in the city.

Traditionally, the main source of income in Jaisalmer was the levies on the caravans. However, the glory of Jaisalmer faded when Bombay emerged as a port and sea trade replaced traditional land routes as the primary method of commerce. The partition of India in 1947 lead to the closing of all the trade routes on the Indo-Pak border and rendered Jaisalmer a drought-prone desert backwater on the international border. Ironically, skirmishes between India and Pakistan give Jaisalmer a strategic importance and make it serviceable as an army supply depot. To some extent however, the Rajasthan Canal has served to revive the surrounding desert areas. Roads and railroads have been built, knitting the previously remote town with the rest of Rajasthan.

In more recent times, the Government of Rajasthan has decided to heavily promote Jaisalmer as a tourist destination, along with the other prominent cities and sights in the state. 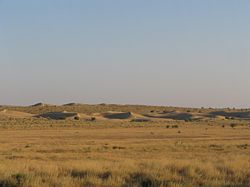 Jaisalmer is almost entirely a sandy waste, forming a part of the great Indian desert. The most notable aspect of the terrain in the area is that it contains an interminable sea of sandhills, of all shapes and sizes, some rising to a height of 150 ft. Those in the west are covered with log bushes, while those in the east are littered with tufts of long grass. Water is scarce, and generally brackish, and the average depth of the wells in the area are said to be about 250 ft. There are no perennial streams, and only one small river, the Kakni, which, after flowing a distance of 28 m., spreads over a large surface of flat ground, and forms a lake orjhil called the Bhuj-Jhil. The climate is dry and healthy. Throughout Jaisalmer only raincrops, such as bajra, joar, motif, til, etc., are grown, while spring crops of wheat, barley, and others are very rare. Owing to the scant rainfall, irrigation is completely underdeveloped and non-existent in the city.

Tourism is the dominant industry in Jaisalmer, as it is in a number of different places in Rajasthan. The city is also well known for its fine leather products made from wild camels native to the area.

The Government of India initiated departmental exploration for oil in 1955-1956 in the Jaisalmer area.[3] Oil India Limited discovered natural gas in 1988 in the Jaisalmer basin[4] It is possible that the future discovery of more energy reserves here could refocus the Indian government's attention towards developing a stronger local economy.

The main part of the population leads a wandering life, grazing their flocks and herds. Large herds of camels, horned cattle, sheep, and goats are kept. The principal trade in the area is in wool, ghee, camels, cattle, and sheep. The chief imports are grain, sugar, foreign cloth, and piece-goods. Jaisalmer suffered tremendously from famine in 1897, 1900, and other years, to such an extent that it has had to incur a heavy debt due to extraordinarily high expenditure levels.

While Jaisalmer may always have been remote, it is filled with many artistic structures and monuments of local historical importance. Jaisalmer's medieval mud fortress and walled township make it a popular tourist destination. The surrounding desolate landscape provides a peaceful, untouched landscape with a sense of quiet beauty. Camel safaris through the nearby desert dunes are popular with tourists, and competition for business is fierce. A few quiet days spent wandering around the town and the surrounding desert can be a wonderful way of unwinding from the chaos of larger Indian cities.

Tourist accommodation is available inside the fort itself. However, eco-conscious tourists might consider staying outside the fort to avoid putting additional pressure on the fort's archaic sewage system (three of the 99 bastions have already crumbled because of water seeping into the foundations). In the past year, there have been hotels and residents inside the fort taking initiatives to help with restoration and avoid displacement. 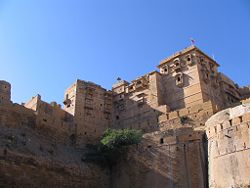 The powerful walls of Jaisalmer Fort

Built in 1156 by the Bhati Rajput ruler Jaisal, it is situated on Trikuta Hill and had been the scene of many battles. Its massive sandstone walls are a tawny lion color during the day, turning to a magical honey-gold as the sun sets. The famous Indian film director Satyajit Ray wrote a detective novel and later turned it into a film – Sonar Kella (The Golden Fortress) which was based on this fort. Jaisalmer Fort is incredibly unique in that the structure is an actual living fort and about a quarter of the city's population still lives inside its walls. It is one of the last places in the world to be able to claim that kind of status, as most of the world's living forts have either been destroyed or put out of service. The main attractions inside the fort are: the Raj Mahal (Royal palace), various Jain temples, and the Laxminath temple.

The main havelis in Jaisalmer are: 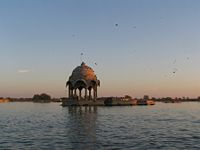 Bada Bagh Panorama in the afternoon

Jaisalmer is well connected to the nearby towns and cities in Rajasthan by air through Indian Airlines.

To get there by train there is a meter-gauge train that connects this place with the rest of the cities in India.

A good network of roads joins Jaisalmer with many destinations in and around Rajasthan. Road travel is the primary method of transportation for getting to Jaisalmer, usually taken after taking a flight to Jaipur or Jodhpur.

Within the fort itself, transportation is usually provided by auto rickshaw and bicycles, because there is not enough room to get around by car, and the roads are not well maintained inside the fort.

In the desert, the primary method of transport is camel, however sometimes horses are used.